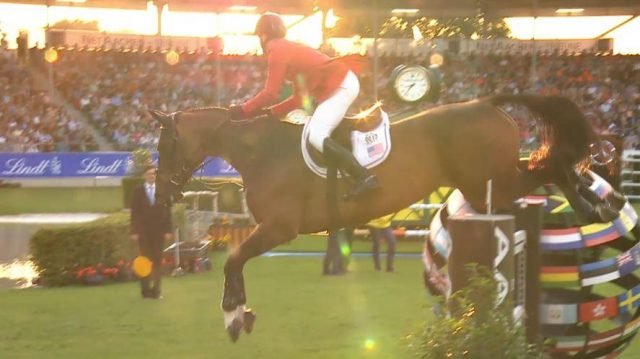 Our sister site Jumper Nation brings us the latest from the show jumping in Aachen! McLain Ward and Annie at Aachen. Screenshot via ClipMyHorse

What started as near disaster for both Germany and the USA was wielded into indomitable grit, and the two teams stood proudly atop the leaderboard in the end. Switzerland showed consistency throughout, ultimately claiming a tie for second with the Americans, and Belgium self-destructed just moments from glory to fall to fourth.

Americans brought their cream of the crop to Aachen looking for a gold medal, but almost immediately, it looked like glory would be hard to find. FEI ranked #1 Kent Farrington and Gazelle headed in first for Team USA and immediately brought home eight faults, as did Beezie Madden and Coach, guaranteeing the best the team would finish was with eight faults – and only if the remaining rounds went flawless.

Laura Kraut entered the ring next looking ready to fight aboard Zeremonie, and while she had to really work in a few spots to get the spectacular gray settled into the right spots, her expertise and the Holsteiner mare’s pure talent pulled out a much needed morale boost and clear round, and Laura looked overwhelmingly relieved leaving the ring. Laura Kraut completes her first round on Zeremonie. Screenshot via ClipMyHorse

She was followed by McLain Ward aboard World Cup queen HH Azur, and soft hands and her gifted jump produced the result she’s known for, keeping the team’s hopes alive.

Germany had a nearly flawless outing in the first round and looked poised to leave their fourth man on the bench before disaster struck as Marco Kutscher and Clenur slammed on the brakes at the foot of the open water. They circled and made it over the second attempt, but took the next rail and had four time faults as well, to put the Germans on 12 for a moment. But fourth man Phillipp Weishaupt piloted the stunning LB Convall to a clear anchor leg to keep Deutschland on zero.

Belgium and Switzerland both produced clear rounds as well in round one, putting the pressure on the bubble teams staring from just outside the mark like USA and the Netherlands on eight and Italy on five.

Into round two, Kent Farrington led off again for Team USA and Gazelle’s second trip started with several rubs, but the mare seemed to get her head in the game in the second half and then never came near the poles again, producing a much-needed clear to finish their day. Beezie’s Coach continued to falter, putting a foot in the open water and having down the oxer in the triple with what appeared to be a faint belly rub on the far rail. While Beezie looked disappointed, she was ever the professional, giving a smile for the generous Aachen crowd as she exited the ring. The pressure was fully on Laura and McLain once again to produce flawlessness, but both pairs seemed happy to rise to the occasion: Laura glowed leaving the ring with all the poles in place, and McLain looked ever the professional after Annie simply sailed over the 1.60m course a second time.

They’d done all they could to finish on eight, and now waited to see how things would shake out.

Italy fell from the bubble after only Juan Carlos Garcia could produce a second clear, and the Netherlands had a disappointing second half to fall to fifth.

Germany’s riders came in smelling blood in the water and slayed, with Marcus Ehning and Pret a Tout, Maurice Tebbel and Chacco’s Son and Phillip Weishaupt and Convall also putting in flawless rounds and dropping Marco Kutscher’s single rail from their final score to end on zero and win in front of the uproarious Aachen crowd.

Switzerland could not replicate their perfection in the first round as Martin Fuchs and Clooney took 2 rails, as did Nadja Peter Steiner and Saura de Fondcombe. They would finish their day on eight, tied with the Americans in third.

Belgium’s zero transformed to a 16 after Oliver Philippaerts had a rail, Pieter Devos failed to start, meaning they would have no drop score, and Gregory Wathelet and Eldorado sadly dropped rails and ended their day with an unfortunate crash through the final fence.

This put the Swiss and Americans into a tied second to end the day – a magnificent end for the lone New World team who had started on shaky ground. Team USA in the prize giving ceremony. Screenshot via ClipMyHorse

“We brought our ‘A’ team to Aachen,” said Chef d’Equipe Robert Ridland. “We have so much respect for Aachen, and we almost pulled it off. It’s tough knowing midway through the first round that the best score you can get is eight faults. We were fully confident that we could correct some mistakes and stay on zero the rest of the way and let the field come back to us. The Germans were just a better team today, but not by much. What we saw here today was sport at the very highest level. It doesn’t get any better than that. And it is an honor for us to be able to compete here!”

You can also download the CHIO Aachen App for iOS and Android.