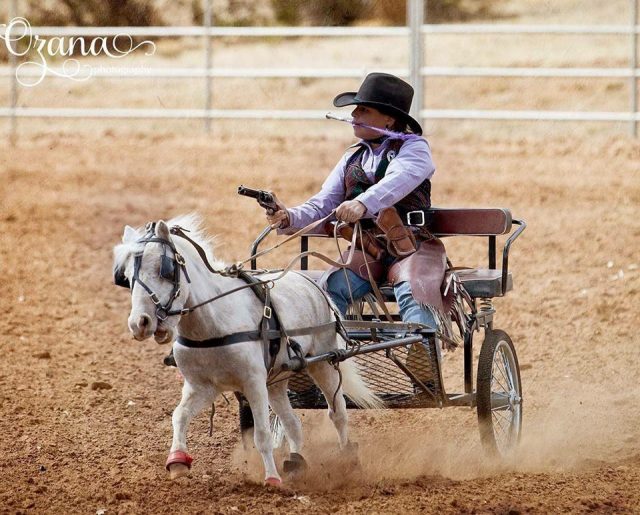 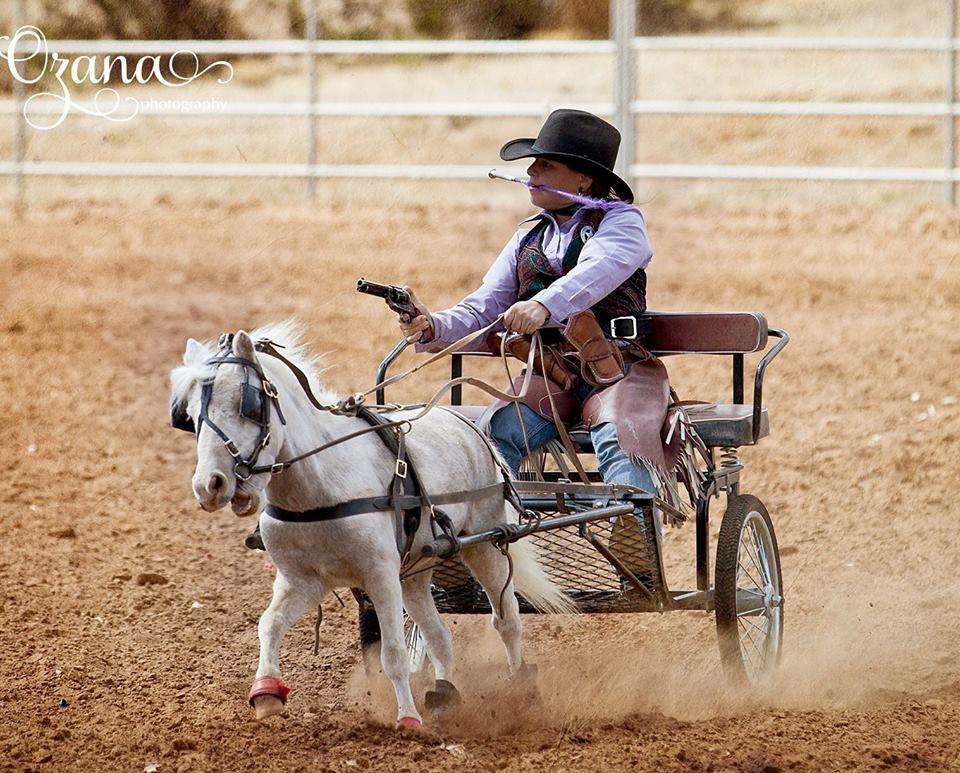 Sara Millard, or as she’s known in certain shooting circles, Colorado Cupcake, and her horse Tazz are certainly not something you’d see every day at a cowboy mounted shooting.

The fast-paced and growing western sport involves a rider on horseback performing a set pattern while also firing a revolver loaded with blanks at balloons (rifles and shotguns are also approved in certain competitions). Competitors typically dress in 19th-century western costume and take aliases to lend a certain old-time Wild West feel to the sport. The best mounted shooters are wickedly fast and deadly accurate.

But Sara doesn’t ride Tazz — he’s a 30-inch tall registered miniature horse. Instead, Colorado Cupcake and Tazz are blazing a wild trail through the west, leading the way in miniature cart shooting. With three World Championship buckles earned so far in Single Action Shooting Society (SASS) competition, it’s pretty clear that Sara and Tazz are a force to be reckoned with. 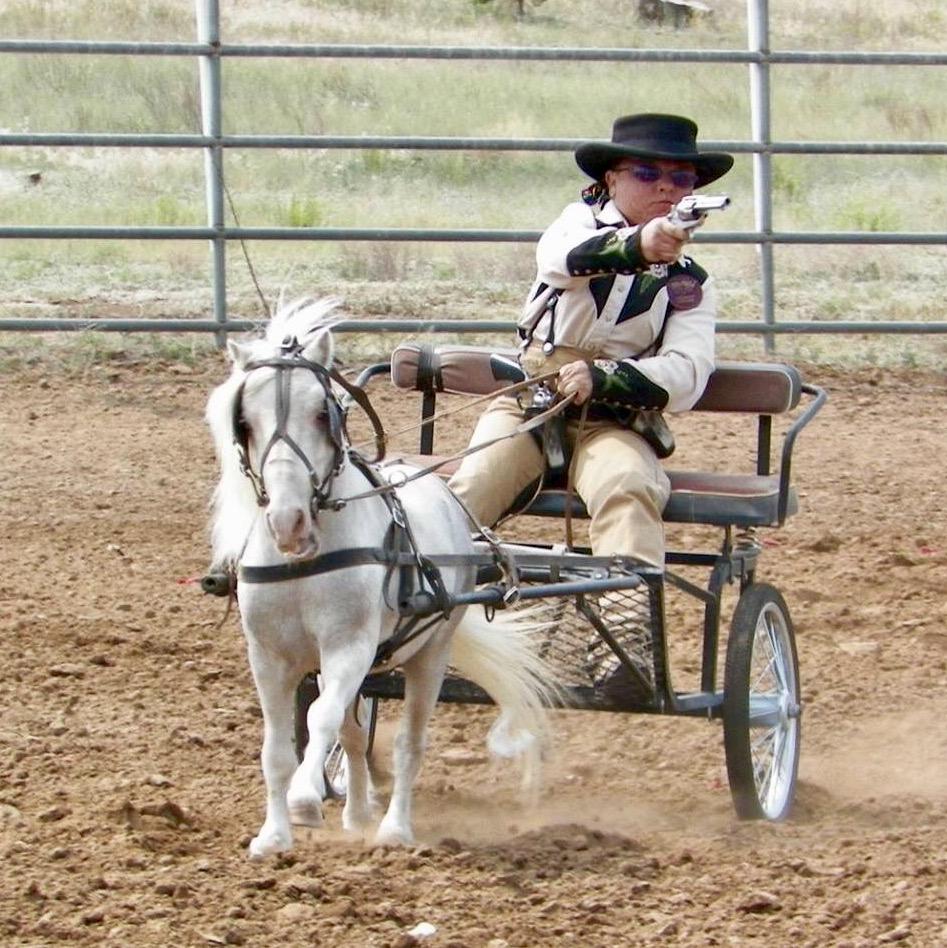 “I got started in mounted shooting when my mom and dad started,” Sara confided to Horse Nation. “I started out riding at a young age, but I’ve really only worked with the miniature horses and driving. I’ve always done the shooting from a cart, and that’s only been with Tazz.”

Tazz is a 2006 American Miniature Horse — and has been blind from birth. Sara acquired Tazz when he was ten months old and did most of his training herself, first showing him at miniature horse shows but then moving towards getting involved in the mounted shooting as a driver. “I started using vocal commands to get him to turn right and left, to stand still and to turn the barrel and run for home. I use one hand to drive since I have the pistol in my other hand, and I cross the reins like you would in a training hold on a riding horse.” Tazz has been extensively desensitized to the sound of shooting. 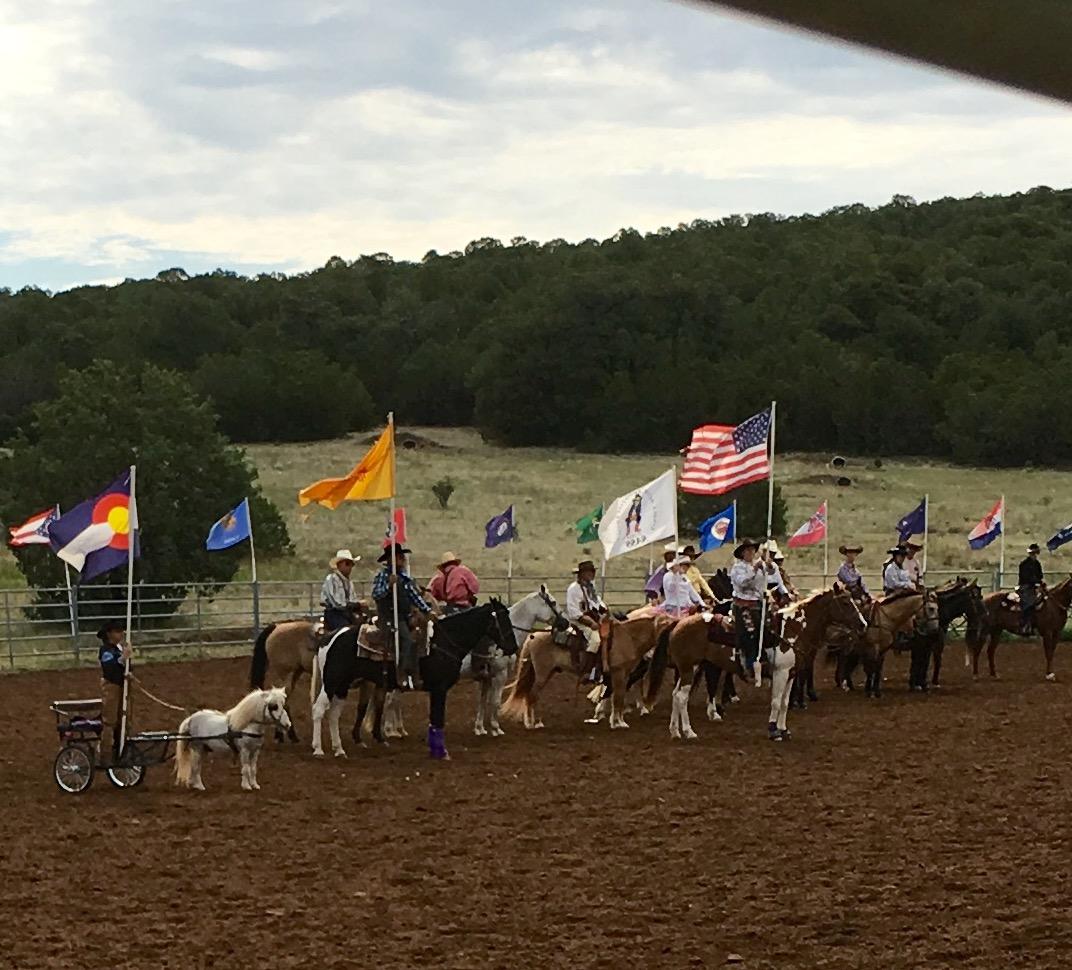 The Single Action Shooting Society graciously added Pioneer Cart as a class, as no association exists specifically for driven shooters. Anticipating that more miniature horse drivers might want to get involved, however, Sara has started her own club called Wild West Minis, welcoming everyone including riders as well as drivers. “There are stagecoach drivers who have commended me for trying something so unique and so different,” Sara adds.

Some individuals in the mounted shooting world see the miniature and cart as a distraction, but Sara is grateful that by and large most mounted shooters are supportive and want to see Pioneer Cart really take off as a division. 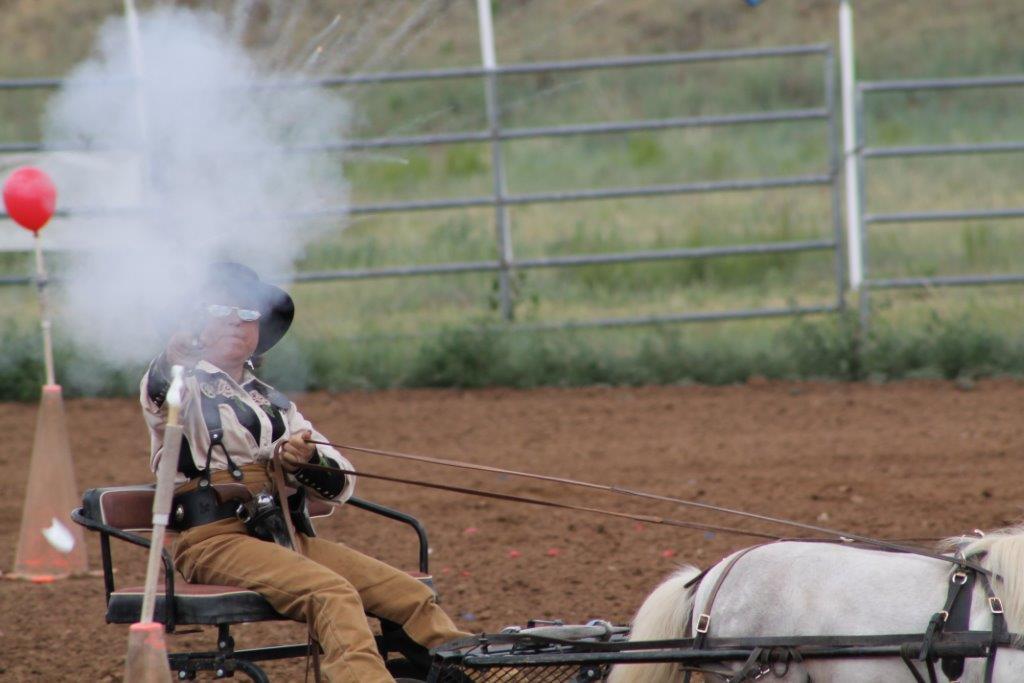 “Me and mystery kidney!”

Sara’s mystery kidney is the result of her second lifetime kidney transplant: diagnosed with a chronic kidney disorder just one week after she was born, Sara underwent her first surgery at the age of six weeks. This would be followed by 151 more. Sara started dialysis at 14 and received her first donated kidney at 16 from her father. Unfortunately, this kidney had to be removed shortly after.

Years of dialysis combined with various setbacks and complications including a tracheostomy, seizures, the removal of her native kidney, strokes and heart attacks made the chances of a second kidney donation slim. But on Sara’s 31st birthday in December of 2016, Sara was moved to the active kidney transplant waiting list, and in March of this year, Sara got the call she had been waiting for — “mystery kidney” would be possible after all.

Since 2007, Tazz has been by her side — even displaying some remarkable awareness for Sara’s health, despite his own limitations as a blind horse. He’s stayed with her during seizures, even during a particularly scary moment in the competition arena; having Tazz to care for has helped Sara recover faster after setbacks and procedures. The World Championship buckles are really just window dressing for the relationship between this horse and driver. 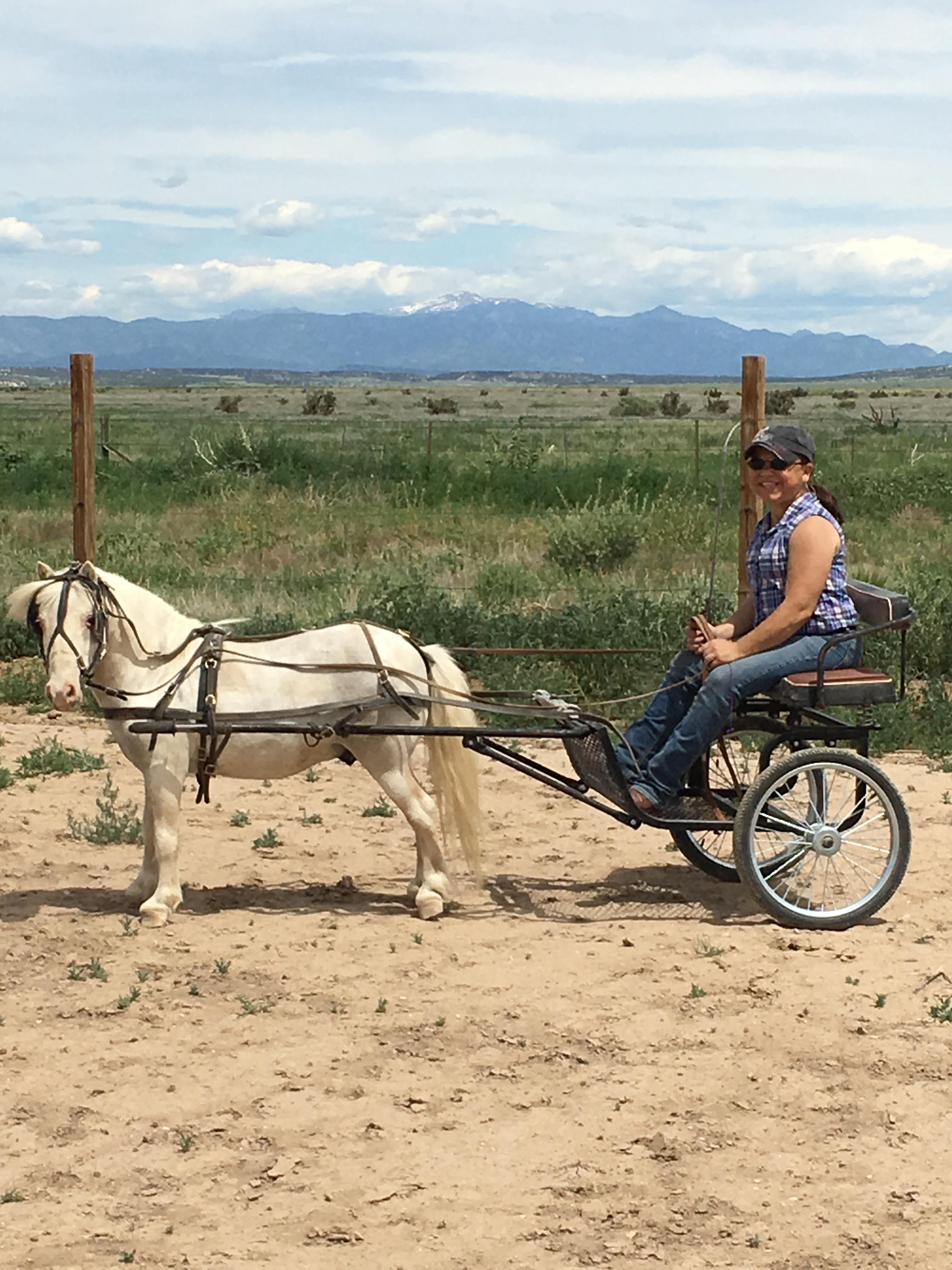 Despite a temporary setback with “mystery kidney,” Sara is looking forward to getting back in the cart with Tazz and developing her Wild West Minis club further. The club has hosted some fun shows in Sara’s native Southern Colorado, so she’s hoping to expand to other states soon to get more mini drivers involved. Most of the SASS events she attends are in New Mexico.

In the meantime, Colorado Cupcake and her miniature horse will continue to remind us every day that anything is possible. 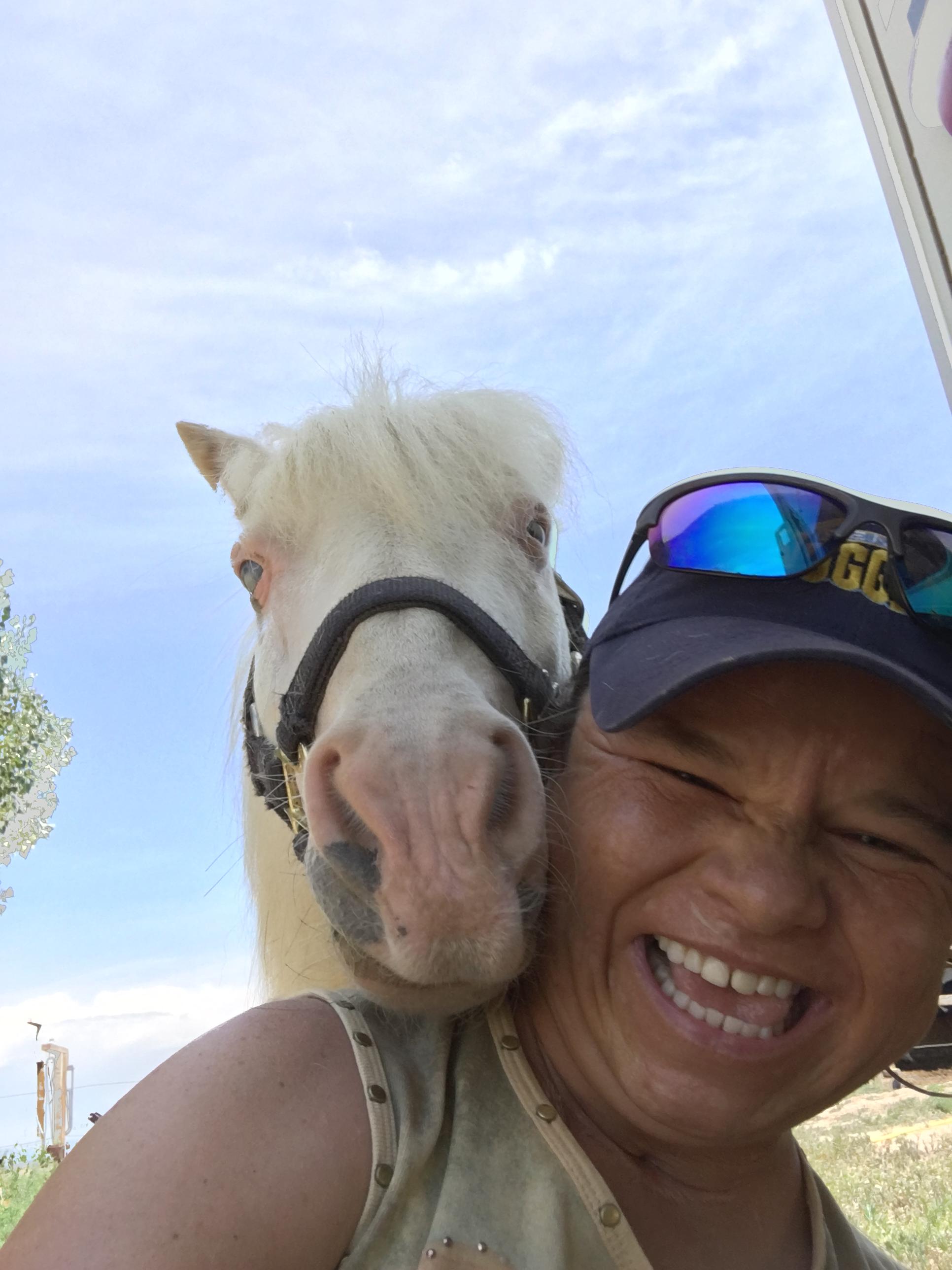