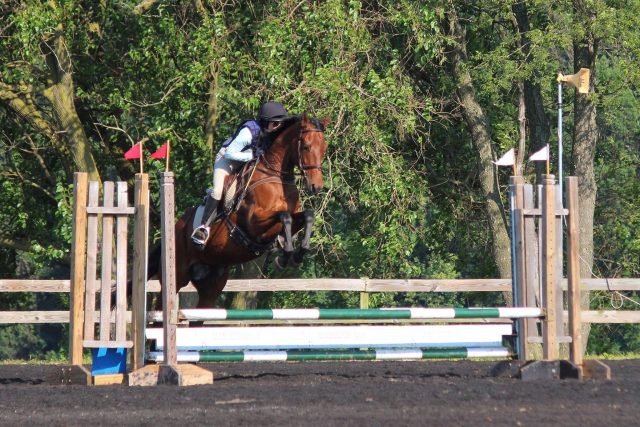 As our series continues, spotlighting trainers preparing OTTBs for the Retired Racehorse Project’s Thoroughbred Makeover, so do the opportunities to learn: today, our trainers are sharing some of their equipment tips.

As the summer rolls on, so do our RRP Makeover trainers and mounts. This month, we inquired about special training tools or aids that our trainers use to bring out the best in their former racehorses when repurposing them for a new discipline. While each trainer does things just a hair differently from one another, they all seek to find what pieces of tack or equipment work best for their very different OTTBs.

“Jacob and I have been having a bit of a challenge with saddle fit and his being comfortable with me riding him. Jacob is cold backed so finding the equipment that works best for him feels like a bit of an unending process.

Kallie has faced many confidence and trust issues while working with her RRP mount Jacob’s Lighthouse that sent them back to the basics to create stability for Jacob’s mental health. That decision comes with the ultimate reward: each month Jacob seems to thrive thanks to his slow and steady re-start under saddle and Kallie has found quite a few pieces that have helped Jacob acclimate along the way. 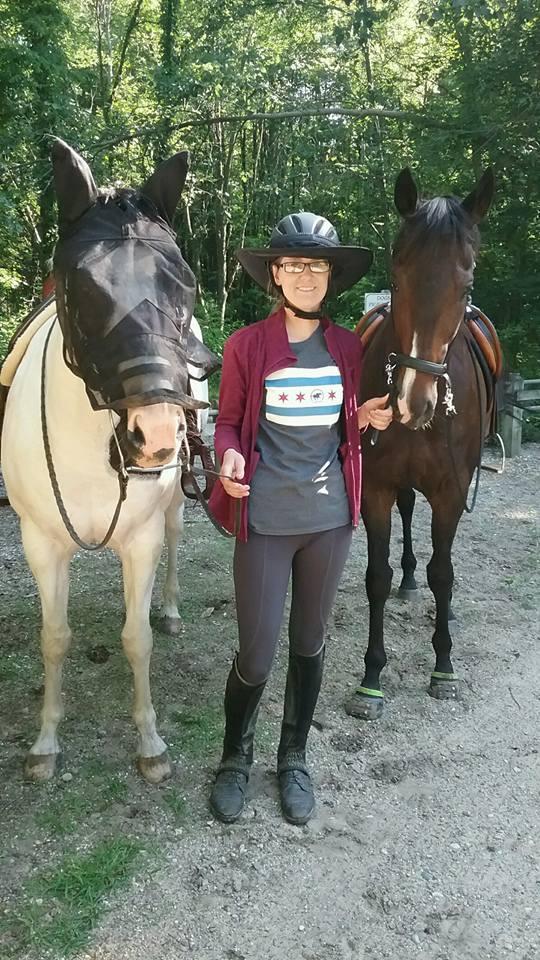 Jacob enjoying a fun trail ride with Kallie and his “girlfriend” Mimbie! Photo by Kerri Zeinstra

When Jacob first came off of the track his hooves were in horrible condition. Mismatched angles led to swelling in his lower legs and stiffness in his front end and a very forward right toe had him continuously tripping over himself. After cleaning up his hooves barefoot, Kallie utilized the Scoot Boot to transition him to shod life. Scoot Boots are lightweight, durable, and waterproof and a great alternative to nail-in shoes. Kallie places the Scoot Boots on before heading out on the trails and he is able to live his life comfortably barefoot. Kallie has also previously talked about the LightRider Bitless bridle that she uses on Jacob and how positively he has reacted to the bitless option.

Like with many OTTBs, Kallie has struggled to find a great saddle fit for Jacob. A bit cold backed, Jacob is very sensitive to saddling and girthing. Kallie started Jacob in the LightRider Bareback Pad, but has transitioned him to a saddle system that he is comfortable with. Kallie uses a Stubben all purpose English saddle paired with an Ovation Europa Sheepskin pad. Jacob does not take well to synthetic or neoprene girths, so he sports a Tory Leather girth to keep him comfortable. Kallie has incorporated a lot of desensitizing into their daily saddling routine to keep him happy and calm during the process. All of this work is done with the intention of preparing Jacob for his first extreme trail obstacle clinic at the end of the month as well as his first horse show where he will just acclimate to the environment!

“After reaching out to her about my concerns with Athena, we determined she simply was not the right fit for myself as a young mother. Amy was very understanding and very generously offered to take Athena and send me another horse, which I took her up on.

June brought on a new challenge for Victoria to face: after many months with Athena she came to the conclusion that the pair was not meant for one another. Thankfully Athena was able to be placed with an eventer and thanks to the help of OTTB expert Amy Paulus, Victoria was able to acquire a new mount who was a wonderful fit for her and her family. Victoria was paired up with a three year old mare named All Rock (who she lovingly calls Ally). Due to Ally’s age, Victoria did not want to press her to jump the heights required of showjumping so she will be showing her in the hunter ring at the RRP.

In preparing a new horse for the RRP a little later in the game, Victoria has to find the right training program for Ally and herself to get them on the path to success. She has been changing bits up to find what bit Ally responds best to. She started her in a happy mouth, but Ally became heavy on the forehand and leaned onto the bit. So, Victoria switched her out to a loose ring French link, but she still hadn’t found the response she wanted. By suggestion of her trainer, Victoria switched Ally to a segunda to get some response from Ally without Victoria having to hold her which has allowed Ally to figure herself out on her own without relying on Victoria’s hands to carry her.

Victoria intends on taking July to prepare Ally for her first show in August, but thankfully Ally has taken to her new career very well! She is jumping 2’ verticals with ease (on a limited basis as Victoria wants to preserve her body because of her young age) and really seems to enjoy her new career. Victoria and Ally are spending some time getting to know each other and enjoying leisurely trail rides with one another, which they both have enjoyed.

“He is probably the happiest horse I have ever owned and is always up for some fun, which makes it much easier not to worry about if we are keeping to the “right” schedule.

Katie likes to keep things straight forward and simple when it comes to her set up with Porter. She is never without her neck strap as it helps her be sure to never catch Porter in his mouth or in case he has a little bit of a baby moment. She was pleased to find that he is starting to learn to half halt off of the neck strap, so it is proving its worth on the cross country course. 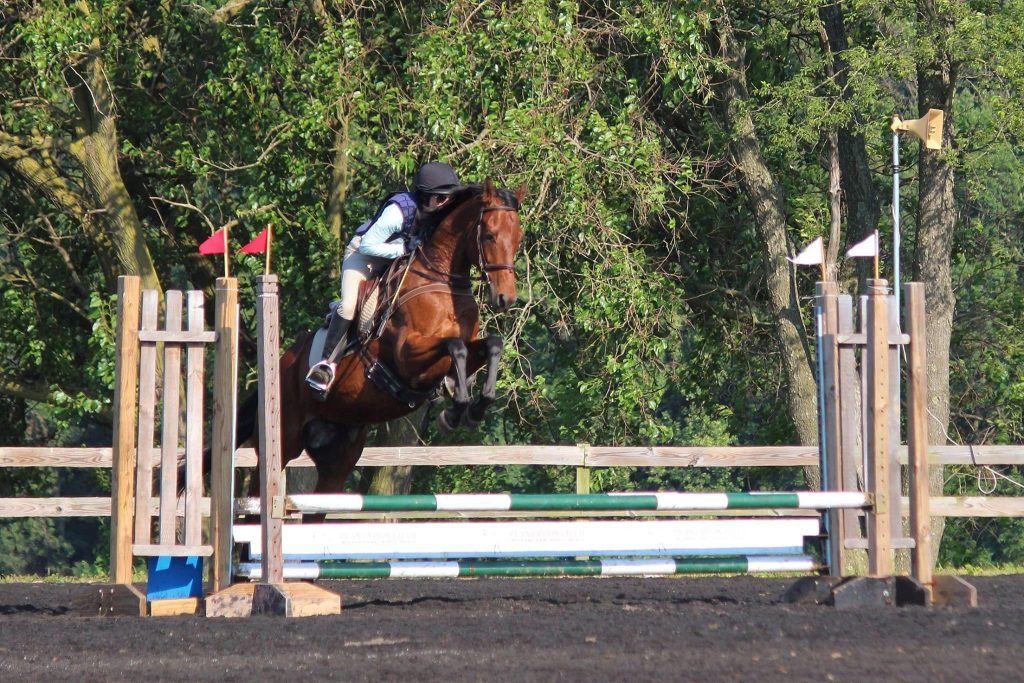 She also really enjoys using Premiere Equine Products and usually can’t be found without a piece of theirs. Porter enjoys going in one of their shim-able pads. Seeing as Porter shares the same saddle that is used on his “sister” Rittle, the shim-able pad allows Katie to get the right saddle fit for him each time. She also likes to work him in their brushing boots on the cross country course to protect his legs as they work. Other than that, Porter goes really happily in a simple jointed eggbutt snaffle and a plain bridle.

Porter tackled his first intro event in June where he was a true gentleman and took all of the commotion in stride. Katie continues to take Porter out on the trails and to some cross country schooling opportunities just to better acclimate him to seeing all sorts of sights and sounds. The warmer weather and a few unexpected thunderstorms have made it a little challenging for Katie to stick to the schedule she had originally laid out for Porter, but they try to have fun and try new things as much as possible!

“Despite the temperature nearing 100 degrees all weekend, Henry put all he had into the day and continued to amaze me.

While it was easy for Heather to find a simple solution for Henry’s bit and bridle (he goes in a double jointed plain snaffle with no martingale), she has had a challenge in finding the right saddle to accommodate his shark fin withers. She recently made an investment in an SPH saddle pad from SPH Performance Gear to help alleviate some of the pressure her current saddle pad situation was causing on Henry’s wither. The SPH pad is a handsome pad with complete open wither relief that allows free movement with no downward pressure. It also sports a cut out where your lower leg rests to allow for a close contact feel.

The first time Heather rode Henry in the SPH saddle pad she felt an instant change in his response time and was happy to see that he wasn’t sore after their ride. She is excited to invest in more of these pads in the future and is sold that this pad will help any horse, especially since they offer an English version as well. 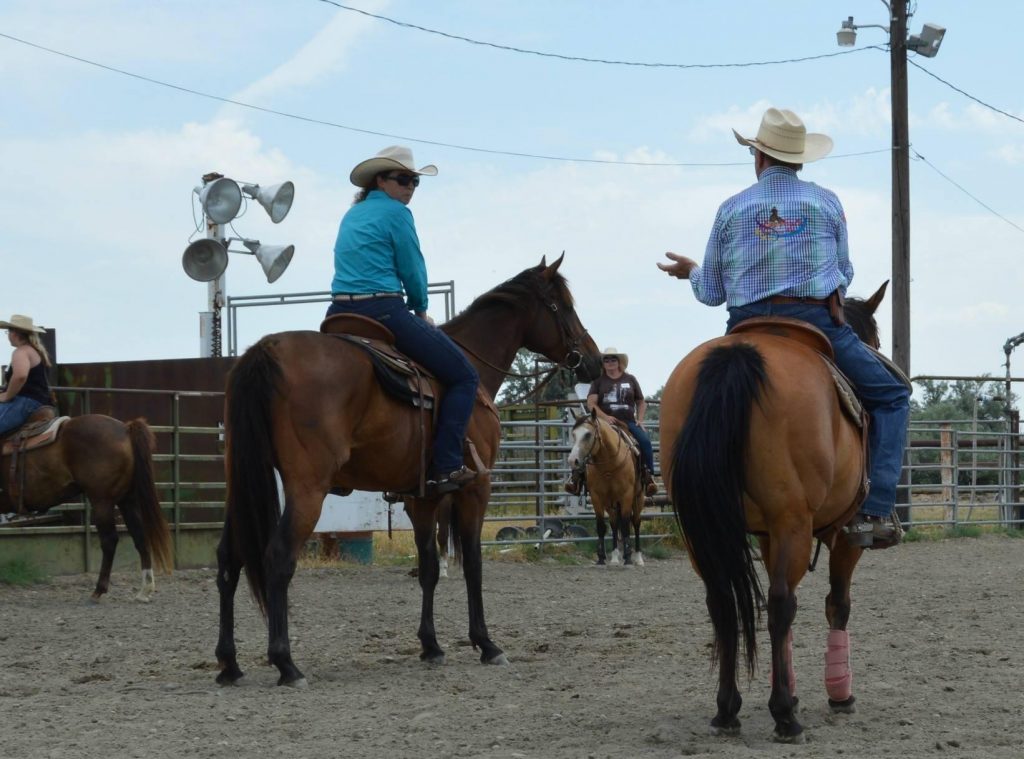 Henry and Heather hard at work with Les Vogt at the clinic they recently attended. Photo by Naomi Brown

Heather has had to spend the past month in work mode rather than horse mode, so Henry got to enjoy some down time and relax in the pasture with his horsey friends. Heather returned home from Military Annual Training just in time to fit a few rides in before their two-day reining and performance clinic with Lex Vogt, a 15 time world champion in reining and working cow classes. Despite the horrid temperatures during the event, Henry put 110% in each day and picked up on all of the new tasks quite quickly. Since the clinic, the pair have been practicing daily and Heather has definitely seen improvement in Henry’s performance. They have some fun shows lined up to better prepare them for the Makeover!

“She started cantering the poles on her own and had a good go and cantered the barrels very well.

Rather than use special equipment (other than the longe lines) to work Edeline in, Amy uses a lot of obstacles and challenges to build her confidence and trust. Amy incorporates bridges, tarps, pool noodles, and a cowboy curtain to start and later incorporates some more difficult obstacles into their training regime. She plans to have many different obstacles in their freestyle pattern, so she is adjusting Edeline to those new scenarios. Edeline responds well to a snaffle for both riding and driving, but Amy plans on switching her to a separate bit for riding and driving so she can adapt to the difference. 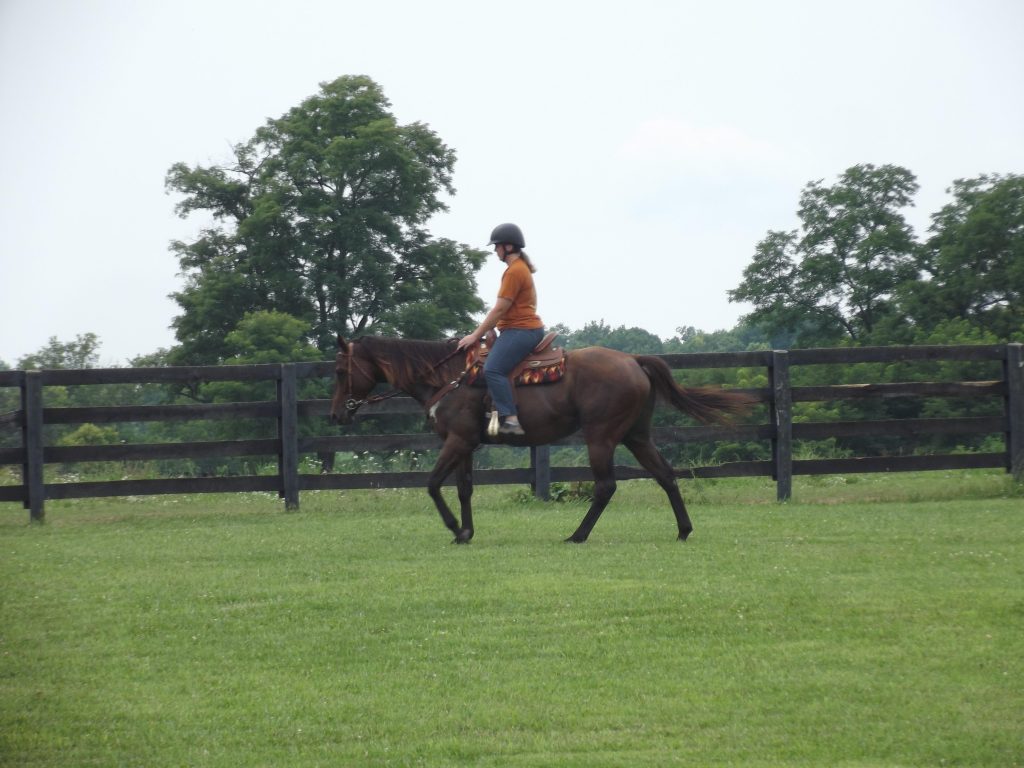 Edeline has been adjusting to the training program very well and Amy has been able to ride her frequently. She took Edeline to her first show just to school her, but Edline was responding so well that Amy decided to enter her in poles and barrels and just trot through those obstacles. However, Edeline decided to show off for the crowd and began to canter the poles on her own. After she was so successful in the poles class, Amy let her go forward and canter the barrels.

Believe it or not, this was Amy’s first time cantering Edeline as she has spent most of her time developing a nice walk and trot for driving. After Edeline placed third in both classes, it was easy for Amy to declare barrels as the mare’s second discipline at the makeover. With continued work through the obstacles Amy has planned both on the lines and under saddle, she is eager to see where the little mare will go and is happy to see she is turning out to be so quiet and trusting.

Each OTTB is different and will require different strategies when developing a training plan, but having the right equipment makes the ultimate difference in their performance. These trainers wanted to share their successes with our readers to help you think of alternative options when selecting the pieces you want to use to bring out the best in your OTTB. While each trainer had their own preferences, they all agreed on one thing- less is more. Over utilizing training pieces on a green horse doesn’t bring out the best in them, but finding the few pieces that they work well with can really change the horse you have.