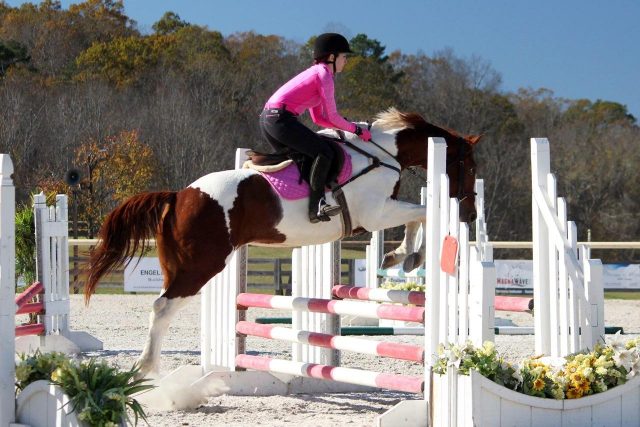 Ainsley Jacobs and her horse JJ are slowly recuperating from a ligament injury — so she’s throwing it back today to 2015, when she accidentally won a divisional reserve championship title.

Adult amateur event blogger Ainsley Jacobs has been chronicling how she finds the takeaway lesson from the good, the bad and the ugly in her equestrian experience. Her horse JJ has been rehabbing from a ligament injury for a few months, so during his layoff time Ainsley is revisiting earlier lessons in her experience.

Ainsley says, “I went to Chatt Hills this past weekend for the USEA Area III Championships and set up a vendor booth with Ride Heels Down. Although I wasn’t competing (bummer) it was great to see all my eventer friends and cheer everyone on. So, for this week’s blog, I’m throwing it back to the time I accidentally won the 2015 Beginner Novice Chatt Hills Reserve Championship!” 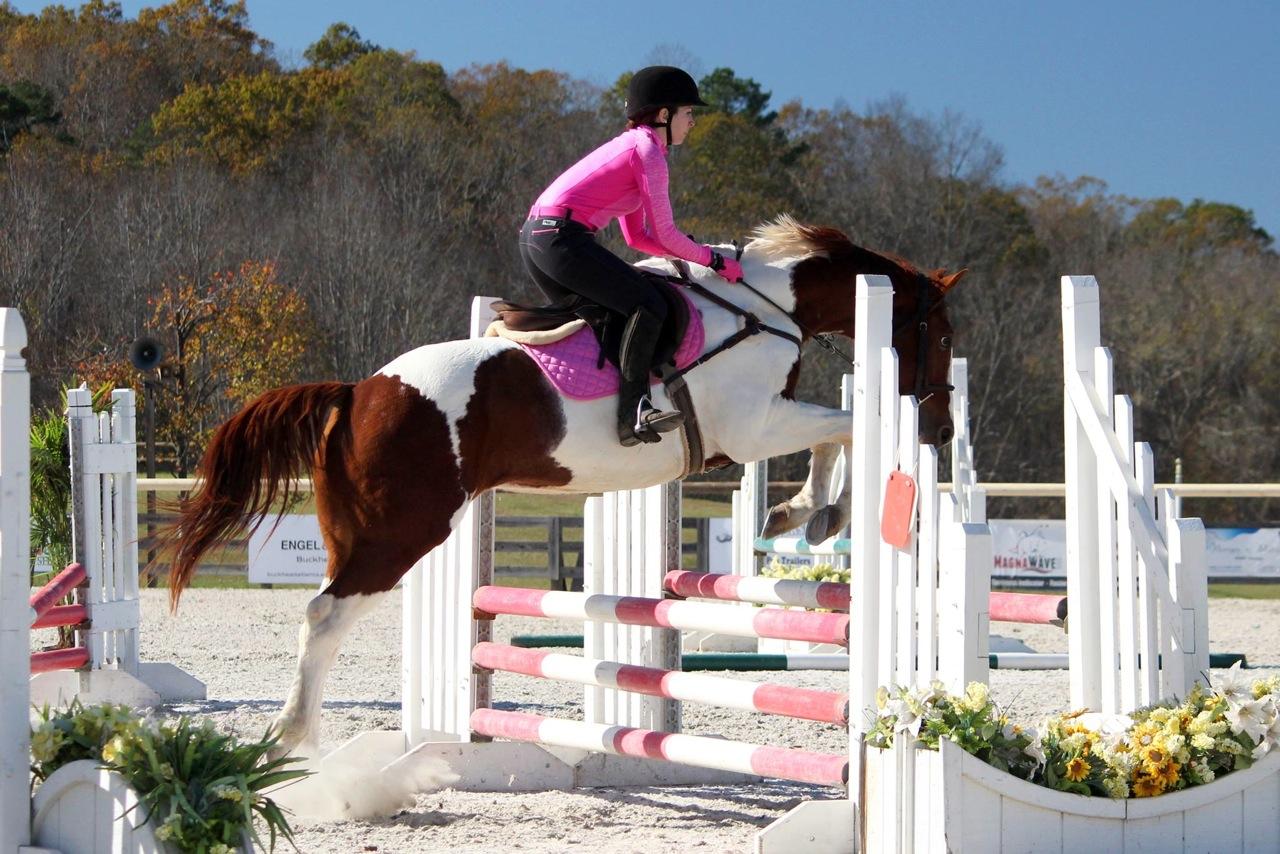 Note to self: buy new boots that don’t have worn down, slippery soles so your stirrups stay where they’re supposed to be. Photo by Erik Jacobs/P.TEN Marketing

I started my 2015 eventing season with an unspoken goal – I wanted to win some year-end award stuff. Let’s face it – you can take the girl out of the hunters, but you can’t take the hunters out of the girl. Awards were, and still are, a big deal to me!

Chatt Hills has a schooling show series with year-end award based on points accumulation. Early in the season, I had delusional hopes of doing well and getting an award. Then, one event was canceled due to rain, I scratched from another, and was out of the ribbons at a few others. I had no hope of making my goal a reality, so I started focusing on my newest goal – surviving.

This was the last Chatt schooling show of the year. I’ve been thinking about moving up to Novice soon since things have been going fairly well lately, and we’re finally getting a handle on how this whole eventing thing works. That said, this was likely my last Beginner Novice schooling show at Chatt, and I wanted to just have fun.

We’ve learned that when we school cross country, JJ and I are both happier if we do several jumps in a row rather than do one, stop, and wait for the group. This time, since we had a HUGE group of riders from Go With It Farm competing (12 to be exact) my trainer wanted me to finish up my course as quickly as possible so that everyone had a turn to go.

Our plan was to have me run my entire course in two halves, without stopping. It wound up being sort of a mini-recognized format. I was a little nervous since the last (and only) time we tried a recognized event, it was awful. Now, though, JJ and I have had over a year together as a team, and we’ve both learned a lot.

I’m happy to say that we cruised through our schooling course without a single problem (well, there was a stop at the water that had me land up on his neck, but it was totally justified on his part and I stayed on, so we’re all good). It was SO much fun to run a course that I’d never seen before, and to know that JJ and I were communicating well enough to get it done!

Saturday morning was the start of another wonderful show day, and JJ and I put in our best dressage performance yet! We scored 32.63 in Beginner Novice A – all of our hard work on the flat the last few months has started yielding big dividends!

We dropped a rail in stadium which was really unusual for us, but I figured we were already out of contention for any year-end stuff so I didn’t let it get to me at all. We’d end up where we ended up, and we were going to have fun along the way, damnit!

Cross country was effortless, and we were extra careful going through the water this time around. JJ responded perfectly and said “yes!” to every question. I am SO proud of how far he’s come in the past year! We no longer fight each other, but trust each other and protect one another. 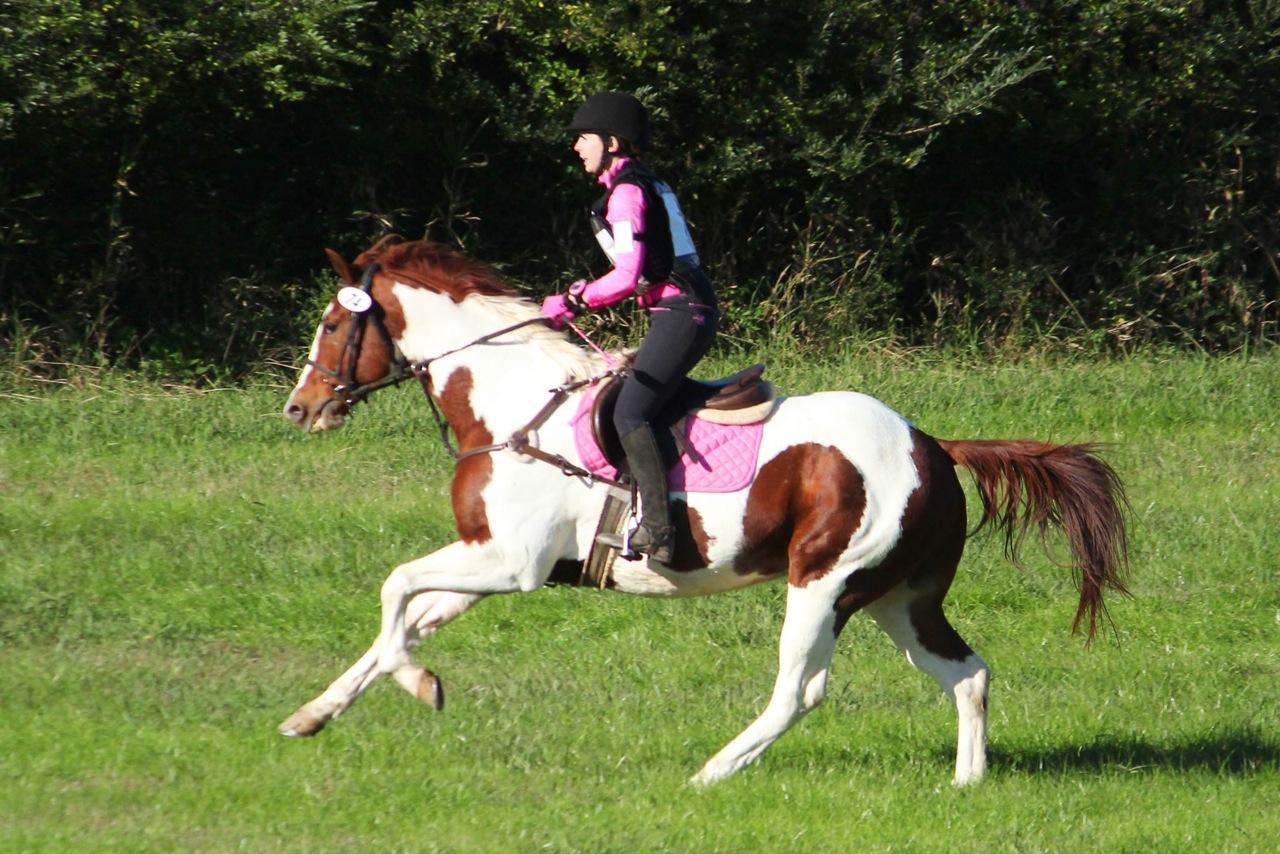 Letting JJ have a bit of a run between fences on our cross country course. I’ve learned to enjoy his speed! Photo by Erik Jacobs/P.TEN Marketing

At the end of the day, it was time to go check scores. I figured that the extra four faults in stadium would put us out of the running in the extremely competitive class, but I was pleasantly surprised to see we had gotten third! Third! That’s awesome! What a great way to finish out the year. To make it even better, the way the scores worked out, even if we had finished clear in stadium, we still would have gotten third, so that rail down didn’t effect our final position at all.

As it turns out, the points we got from our (unexpected) third place finish were enough to move us up into the Reserve Champion spot for the 2015 Beginner Novice division! Woo hoo!!!

For the past year, we’ve had a lot of ups and downs. We’ve had fails, falls, struggles, and occasionally, success. The biggest thing I learned, however, is how to have fun even when things aren’t going like I’d hoped they would. Thank you, JJ, for a wonderful Beginner Novice season!!!

If you want something, you need to commit to it and work hard – especially in eventing. Eventing is HARD. It takes a lot of dedication, but when you achieve your goal, it makes everything worth it.