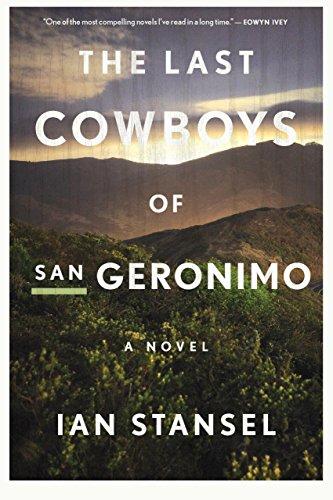 A novel by Ian Stansel.

In the admittedly small but happily growing genre of horse fiction, the perfect balance of a gripping plot set in an equestrian’s world is hard to find. There seem to be plenty of books about equestrian-specific struggles — finding one’s way in the show world, saving a troubled horse, the classic underdog story or sentimental foray into the therapeutic power of horses to heal all of our injuries. There is a time and place for all of these tropes, however well-worn they might be — but to find a story set in the horse world, entwined with horses and horse people, yet without reading like the typical “horse book”? That’s a rare thing indeed.

That’s exactly the balance that Ian Stansel has struck with care in his novel The Last Cowboys of San Geronimo. The novel tells the story of brothers Frank and Silas Van Loy and Frank’s newly-widowed wife Lena: Frank’s already dead on the first page, felled by Silas’ gun. What follows is Silas’ flight into the hills of Marin County, California on the back of his mare Disco, pursued by Lena, also on horseback; each thread of these characters’ stories is intertwined with memories and reflections on the brothers’ rivalry that developed over the years into a dangerous feud, played out in the equestrian scene of San Geronimo.

The novel is widely hailed as an updated or contemporary Western and does contain most of the key elements — a cowboy figure with his trusty steed and gun, flight into wilderness and, of course, revenge. A few noted choices in setting — the brothers turn their family horse ranch into one of the finest hunt seat establishments in Marin County in order to compete with the times — prevent The Last Cowboys of San Geronimo from slipping into the overbearing fatalistic themes that are so common in many modern westerns.

The horses, especially Silas’ mare Disco, are key characters but not over-emotionalized; Stansel clearly knows his way around a horse but avoids using the animals as emotional mirrors or dumping grounds for each of the human character’s personalities and personal drama, successfully avoiding a quagmire that seems to bog down a lot of equine fiction. At its heart, the novel tackles the themes of sibling rivalry and brotherly love, and the motivations of revenge.

The Last Cowboys of San Geronimo is one of the most riveting books I’ve picked up in a long time: I could have easily sat down and read the entire novel cover to cover in the course of a single afternoon without feeling like any time had gone by at all. Stansel’s novel is the perfect horse book for a reader who doesn’t want to read a typical “horse book,” but a gripping plot set in the equestrian world.

The Last Cowboys of San Geronimo is available at Amazon.