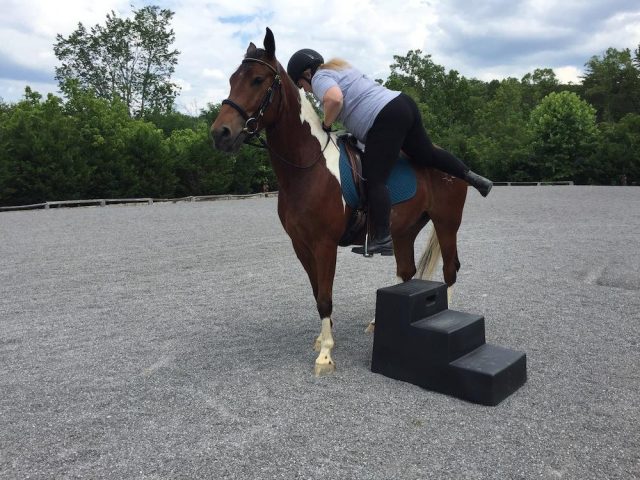 Esther Roberts continues to find inspiration from American philosopher William James, and applies his words to her weight loss process as a “bold, not old” horsewoman. 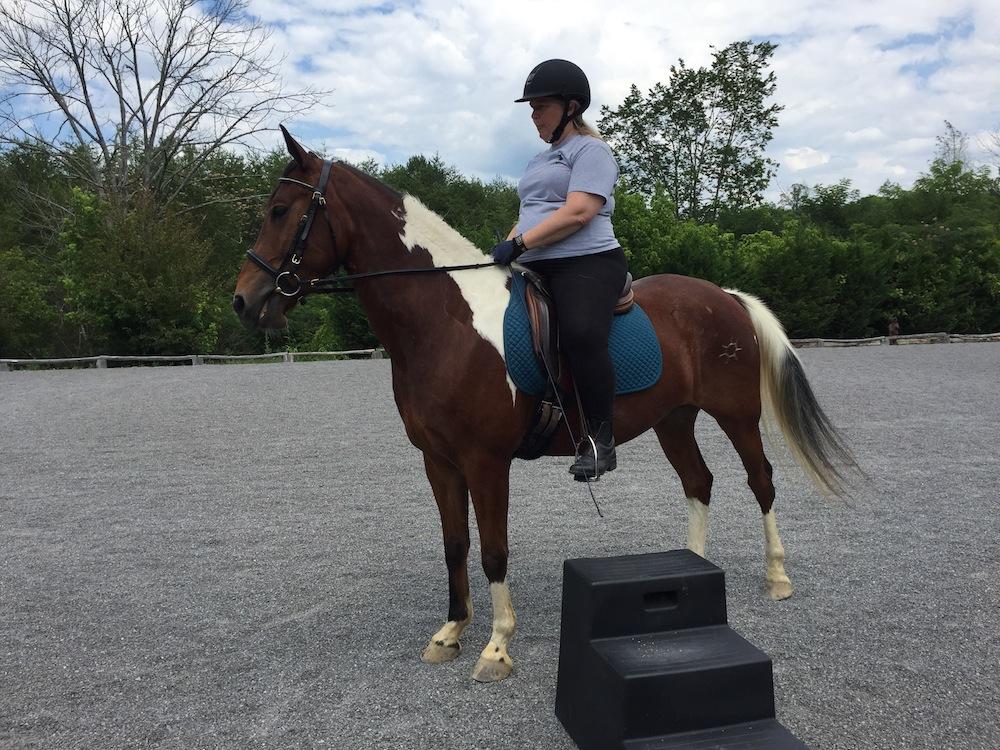 Are you new to Esther Roberts’ series “Fat to Fit to First Level”? Catch up on past columns here.

Nineteenth century American philosopher William James wrote, “The greatest discovery of my generation is that a human being can alter his life by altering his attitudes.” That sorta sounds like, “as ye think, so ye be,” to my Sunday school-reared mind.

Therapist Amy Morin writes in Forbes, “the way you think about yourself turns into your reality.  If you draw inaccurate conclusions about who you are and what you’re capable of doing, you’ll limit your potential.”

As horse people, we don’t have much time for deep introspection or “woo woo” philosophizing. So let’s get down to the nuts and bolts of how your thoughts affect your weight. And where better to start than with our equine partners?

Expert horsefolk from Tom Dorrance to George Morris teach this fundamental truth of horses: ask light, get light; ask heavy, get heavy. We use the least amount of pressure required to teach the horse to do whatever it is we are asking them to do. Ask light, get light.

I’ve spent decades “asking heavy” of myself: demanding I overachieve in multiple, challenging professions, forcing myself to push beyond any reasonable boundaries of health and rest. Three hours of sleep? No problem – caffeine can fix that! No time to eat? Gimme sugar and carbs and I can snarf 2,000 calories of “energy” in about 6 minutes. You want raw honesty? Here ya go:

For the record, a dozen Krispy Kreme original glazed donuts contain 2,280 calories. And yes, I’ve eaten an entire dozen while driving between appointments. And yes, I’ve carefully wrapped the box in a bag to throw away so no “public” evidence remained of my krazyfest.

And yes, I kicked myself for days afterwards and felt like a complete failure. Which made it all the easier to fall prey to the next craving, because hey, I’d already blown it and gained weight from the krazyfest, so what’s one package of mini-donuts the next day gonna hurt? And a mini pecan pie the day after that? This morbid merry-go-round of not valuing myself enough to take the time to eat quality food, then feeling like a big fat failure (literally), over and over, round and round is the downward “think-and-be” spiral that got me to 207 pounds in the first place.

I decided it was time to reverse course and start a “think-and-be” upward spiral towards health and fitness.  Time to stop drawing “inaccurate conclusions” about who I am and what I’m capable of doing. Now. Radically.

So here’s a word for you to try on: ATHLETE. 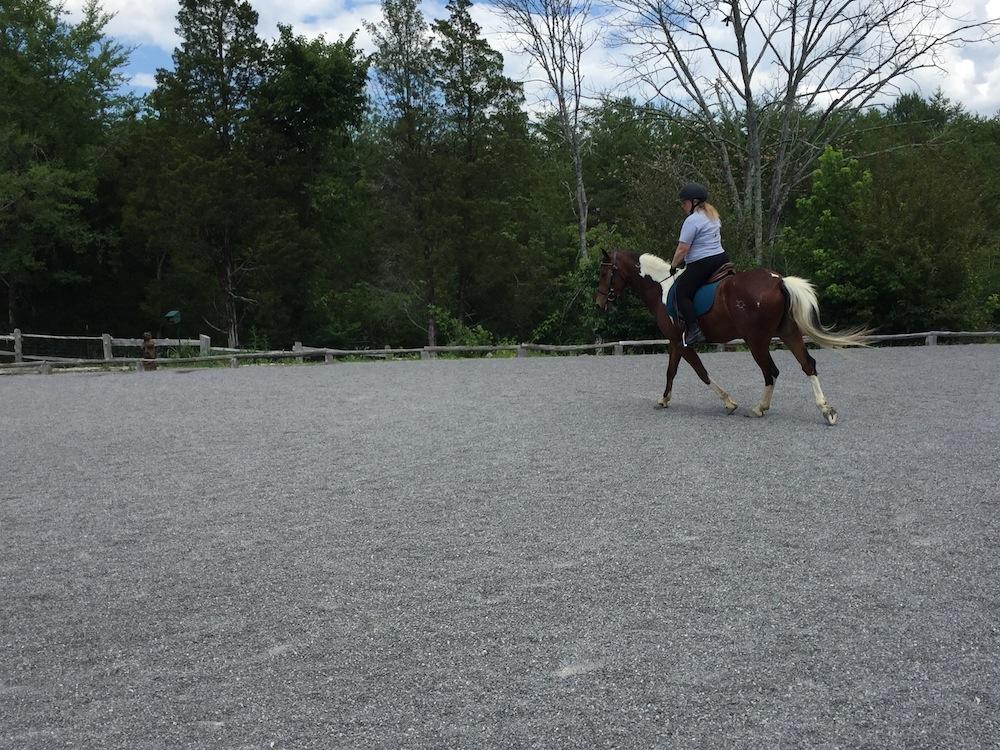 Kaliwohi beginning to step under at the trot on 20m circle. Photo by Amanda Grace Woodside.

Maybe I’m not the best rider, but I give my all every time my hands take the reins. I respect my riding partner. I show that respect by giving Kaliwohi my undivided attention and having a plan for that schooling session with definite goals in mind (hat tip to Eliza Sydnor Romm). I integrate natural horseman techniques that work really well with a mustang – or any breed of horse (hat tip to mustanger and natural horseman Mike Branch).

Two years ago, I was on the verge of a complete breakdown. I felt like there was no hope, no joy, and no future for me as a rider, and that felt like no future at all. I found a life coach, found my faith again, and started unburdening my soul, bit by tiny bit, of everything I had let pile up inside over the past couple of decades.

The image that I found helpful then was that of those poor overburdened donkeys in foreign lands that have boxes or baskets piled much too wide and high. They trudge on until, exhausted, they collapse, bless their noble hearts.

The difference is, of course, I am not a donkey. I have a choice to release the load or continue to be burdened.

Slowly but surely, I began lightening my mental load. The mental unpacking was (and IS) a necessary first step so I could actually be strong enough – in mind and spirit – to deal with whatever unhealed emotional “stuff” that was at the root of my stress-based overeating and sugar cravings.

We ask our horses to do new things in tiny little steps. They progress by tiny steps as they master each prior step. I’ve been teaching Kaliwohi to stand — just stand while I mount up. Stand and stay still after I’m in the saddle. Stand for five seconds. Stand for ten seconds, so he understands we don’t “mount and go.” We mount. Full stop. He waits until I say “go,” (lightly); then he steps off (lightly). Ask light; get light. 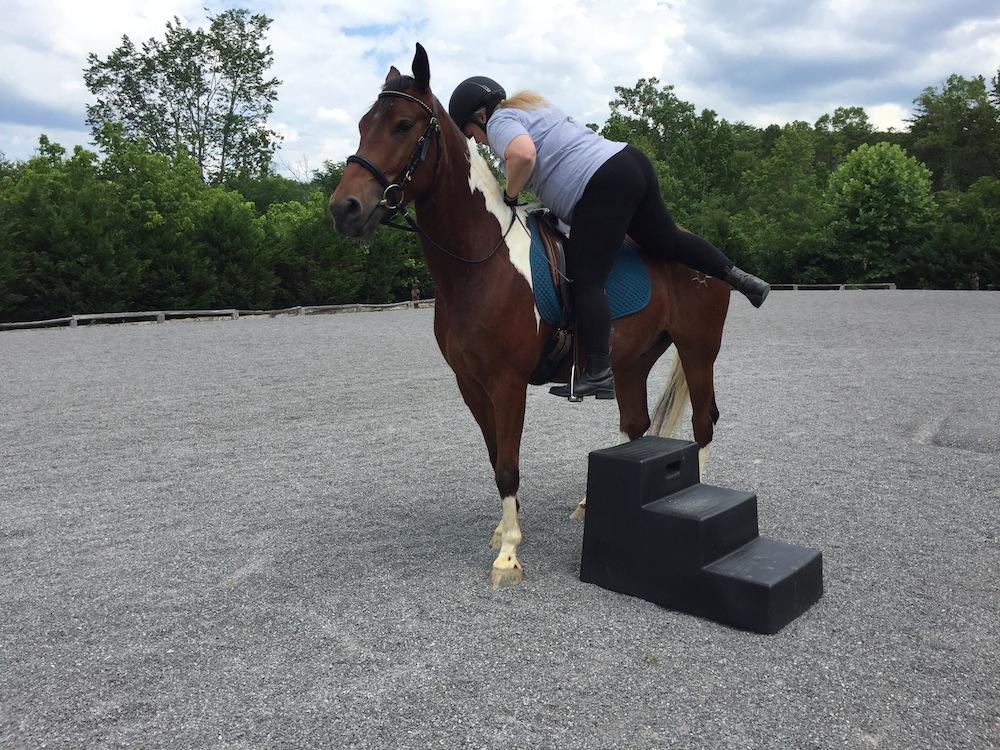 That “in between” moment of mounting. Photo by Amanda Grace Woodside.

Teaching a young horse to stand while being mounted and stand still afterwards until you say “go” achieves several training goals. You’ll have set the foundation for great scores on halts. You’ll have a much safer horse during that in-between moment when you’re neither completely on the mounting block nor completely on the horse yet (this moment can be particularly angst-creating in those of us who are not lean and lithe).

Most importantly, you give the horse a moment to quiet his mind and prepare mentally for the learning session ahead, like a first grader who walks into her classroom, hangs up her sweater, gets her primer out and then sits quietly at her desk and takes three deep breaths. Ready to learn. Lightly.

This is my current self-talk. And it is, indeed, changing my life. 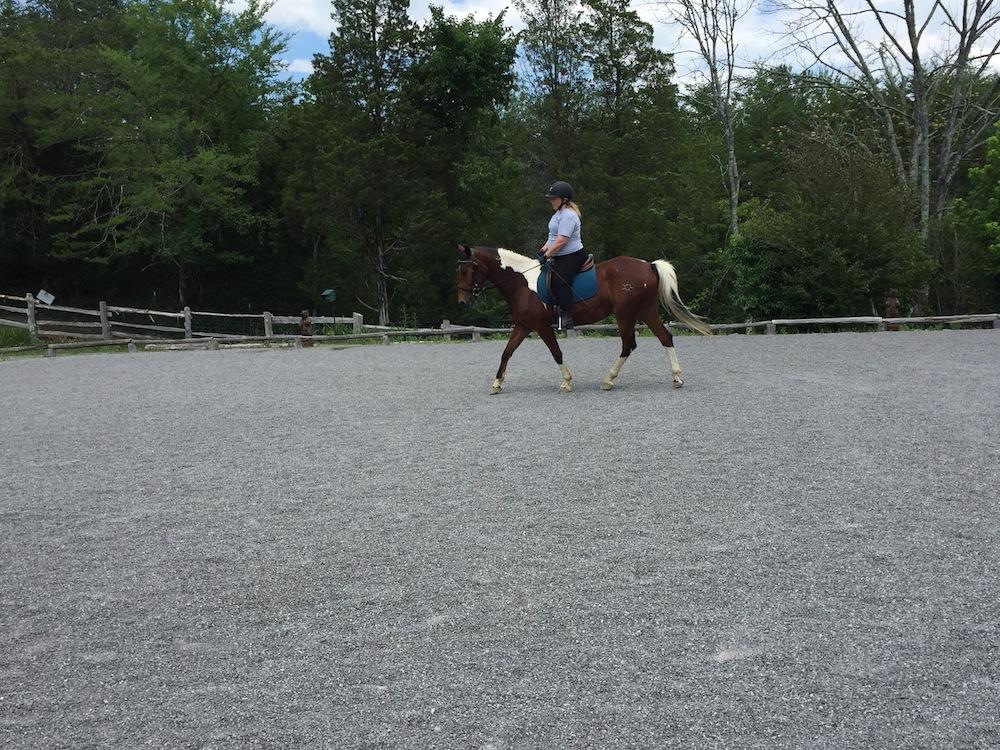 Kaliwohi learning to balance at the trot. There is not much engagement in the hind yet, but his trot is rhythmic and he is very relaxed. Photo by Amanda Grace Woodside.