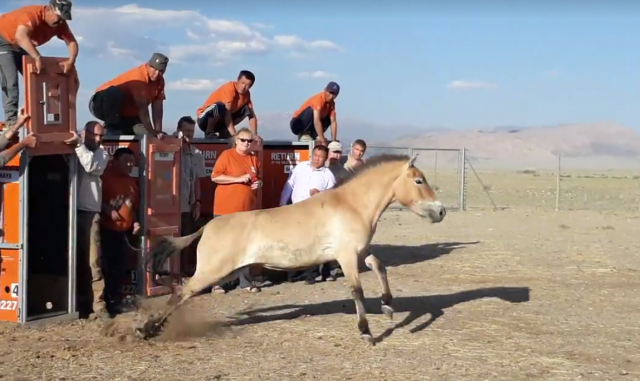 Thanks to conservation efforts, the rare and endangered Przewalski’s horse is being slowly reintroduced to the wilds of Mongolia.

The Przewalski’s horse looks like a living cave painting — which is accurate, as it hasn’t changed much from those days! Differing from feral species of free-roaming horses such as the American mustang or Australian brumby, which descend from stray domesticated horses, the Przewalski’s horse has never been tamed.

But tragically, the last Przewalker’s horses to be seen in the wild were last spotted in the 1960s, roaming the steppes of Mongolia. Thanks to conservation efforts around the world between zoos and programs in many different countries, however, the Przewalski’s horse is making a slow comeback, with successful reproduction taking place in the reintroduced herds.

One of the most significant organizations working to help preserve this species of horse is the Prague Zoo, and four horses from Prague were recently released in Mongolia after a long journey by air and road:

According to the video description and additional information in the comments, these four horses will first acclimate in this smaller enclosure, where they are given hay and water, before moving to larger areas and eventually meeting the wild herd.