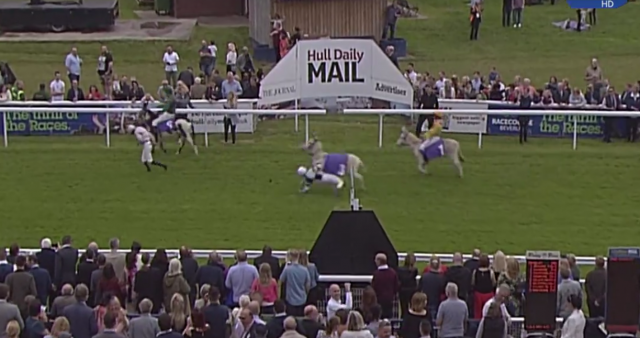 Beverley Racecourse of East Yorkshire hosted its famous Donkey Derby earlier this month, and as usual the race provided plenty of thrills and spills.

The Donkey Derby asks professional jockeys to saddle up on a field of good-humored long ears who then occasionally actually participate in a bit of a sprint race. No donkeys are harmed in the running of the Derby; it appears to be all in good fun and as anyone who’s ever worked with a long-ear can tell you, if the donkeys don’t want to participate they simply won’t.

In our opinion, this year’s race was not nearly as exciting or entertaining as last year’s, which definitely deserves a view:

The 2016 running was held as a beneficiary for the horse rescue Prince Fluffy Kareem. We were unable to find a recorded beneficiary for the 2017 running, but we’d imagine the betting handle from such an event could certainly help a deserving rescue or nonprofit in need!