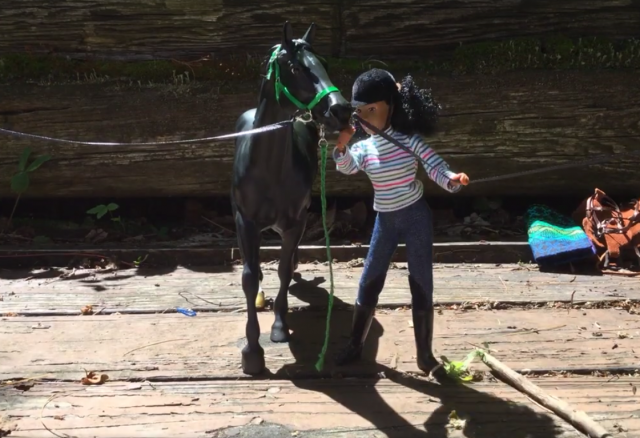 Safety-conscious, methodical, as equitation-correct as a riding doll can be… we think we found our next up-and-coming equestrian film director star.

Abby Grove, age 13, has been making stop-motion videos with an iPad for about two years. Her work ranges from hand-drawn stories forming rudimentary animation to “live” models that she carefully manipulates to tell a tale. Horses tend to figure prominently. Abby is also a horsewoman, riding in camps and lessons at the local university equestrian center.

As described by her father, “can you tell that Abby is excited for equestrian camp to begin this week?” Enjoy young Ms. Grove’s latest short film:

While the storyline is perhaps nothing new to most riders, we’re impressed with Abby’s attention to detail, from the careful dropping of the cross-ties to correct leading practices to a little “Around-the-World” warm-up. There’s quite a lot of turns on the forehand and pivots on the haunches which might make some viewers a bit dizzy… but the rider carefully picking REAL DIRT out of the horse’s hooves at the conclusion of the ride won our hearts forever.

Abby Grove did not have an artist’s statement to provide, but her father added that this particular film took 652 frames (!) and that Abby created all of the horse’s tack herself by hand.

Abby, we at Horse Nation wish you the best of weeks at horse camp, and we can’t wait to see what equestrian films you produce next.