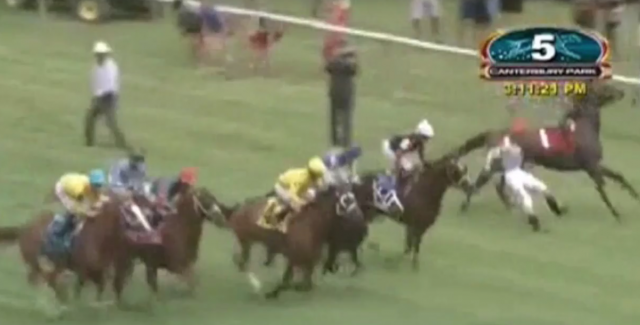 So many “oh crap” moments happened in the making of this race that you might argue it was destined to be a disaster from before the start!

Monday is already the crappiest day of the week, so it only makes sense that we make things official. We didn’t have any reader submissions this week… but we do have footage from an impossibly “crappy” race at Minnesota’s Canterbury Park from June 18.

Prior to the start of the maiden claimer for fillies and mares (and this video), a filly named Lil’ Red Devil flipped in the gate and was scratched; another filly named Show bolted and evaded capture for a few minutes before also being scratched. This is where our story begins, as noted by race caller Paul Allen as Little Drama Mama loads into the gate:

We applaud the observant and quick-thinking jockeys who successfully evaded disaster in this race by pulling up and changing course — not always an easy task when you’re balanced over a thousand-pound animal at top speed with a lot of momentum behind her. This race was declared a no-contest and all bettors’ money was refunded.