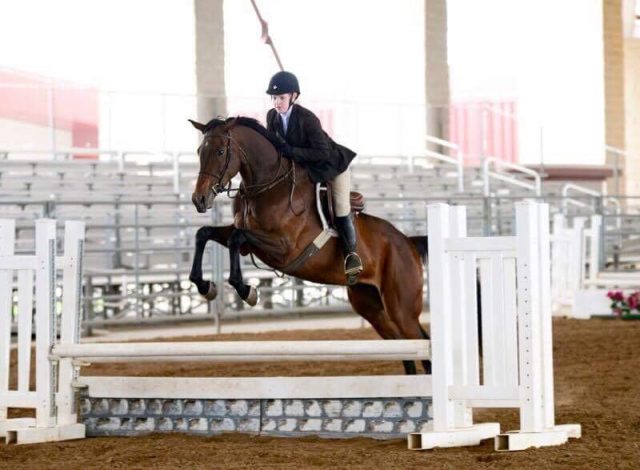 Our spotlight Retired Racehorse Project trainers don’t just have training challenges to work with — they need to find the best diet for their OTTBs too! Here’s the inside (feed) scoop from the second half of our spotlight trainers.

The start of the summer was also a jump start for many of our trainers’ programs with their Thoroughbred Makeover mounts, bringing them much success and excitement. Unfortunately, it cannot always be good news and this month also brings us to the close of a chapter for two of our trainers. With one door closing, there is always another that opens, however, and we continue to share their stories despite the challenges along the way.

“Feeding the OTTB is basically a daily chemistry experiment.

With a wide range of OTTBs at her farm, Lauren is no stranger to the challenges that come with finding the right diet plan for each individual horse. She likes to start each horse around the same basic idea: mix the right amount of Feed A with supplement B and soak with water or oil C and hope you see the “chemical reaction” (or as we know it, fattening) in that horse in the next two to three weeks. While it is wonderful when the first try is a home run, she knows that sometimes even the best made plans need a little tweaking and she continues to vary her mixes and measurements until she finds the right nutrition plan for that horse.

Gift came to Lauren from a barn where he lived outside for half of his day or more. While natural forage is an excellent supplement to any diet, Gift was still in need of some groceries to get him to his prime form. At first, Lauren was a little concerned about fattening him up as her horses are restricted to limited turnout due to pasture quality and size, but thankfully with the help from Seminole feeds, she found the right mix for him. Gift gets free choice alfalfa 24/7, which Lauren thinks makes a huge difference alone. They started off feeding four small meals daily consisting of two and half pounds of Seminole Dynasport, but once they saw the improvement in his weight they backed him down to three meals a day of about five to six pounds of grain. On top of that, he receives Smart Gut Ultra by SmartPak to control the risk of ulcers. 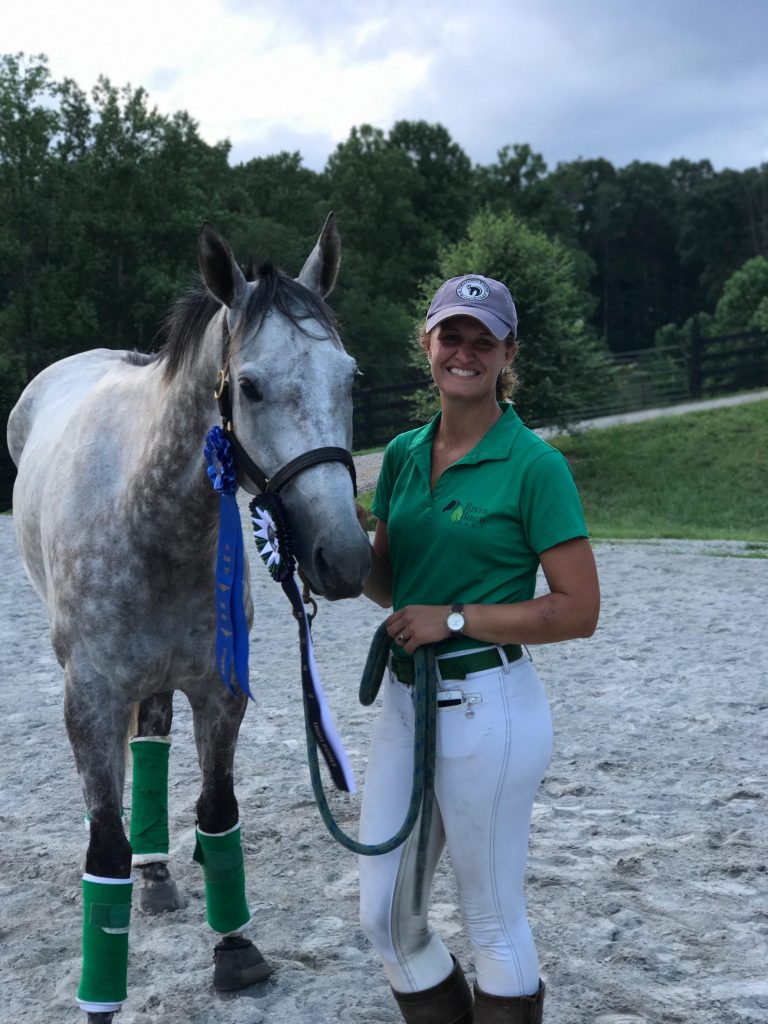 While the thought of sorting out Gift’s diet seemed a bit daunting, Lauren’s concoction is apparently working just fine. Not only does Gift look amazing, but he just brought home the win at his very first horse trail at Full Gallop Farm on a score of 28.8. Way to go Gift and Lauren!

“When I first got Bentley he was coming off of a 10 month layup after fracturing his sesamoid and he was kind of overweight.

Someone has to have the unicorn in the bunch and Savannah drew that lucky straw. She describes Bentley as a bit of an easy keeper and even felt he came to her a bit overweight after recovering from his track injury. When he started work, he lost the excess weight and began establishing a fit physique. In order to keep him building that muscle tone, they began feeding him an alfalfa/timothy mix spread throughout the day. Rather than continue him on straight alfalfa, which is what he previously had been fed, Savannah opted to feed the mixture because of alfalfa’s high protein content and select timothy because of its ability to balance the calcium-phosphorus ratio that is high in straight alfalfa. Upon entering consistent work this January, Savannah started him on a grain program to help him reach that ideal condition. 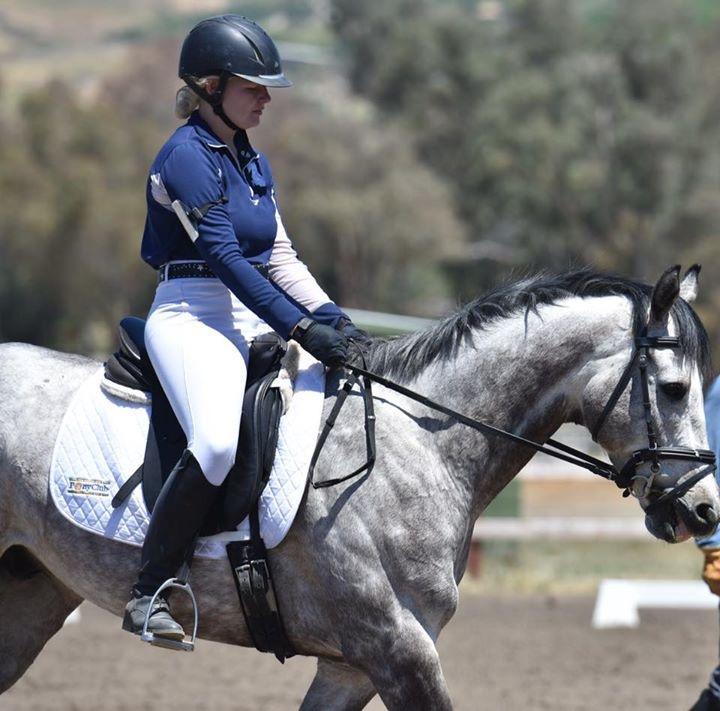 On top of his hay mixture, Bentley is fed four times a day. In the morning and at lunch, he gets ten pounds of hay followed by one quart of Triple Crown Complete and a pound of beet pulp at around 2:00 in the afternoon. Dinner is a little later in the evening, around 7 pm, and consists of another ten pounds of hay. Thankfully, this program has worked well for Bentley and so far Savannah has had no issues with his weight.

This month has been a bit interesting for the pair. Following their last clinic Bentley picked up on the habit of flipping his head. They struggled for a couple of weeks with getting him back to accepting and understanding Savannah’s aids, but he was being quite the challenge for our young competitor.

There is always a rainbow at the end of the rain though and just last week while at their lesson they started out with leg yield work in an attempt to get Bentley to move off of her leg and the difference was incredible. Bentley dropped his head and lifted through his back and the team moved forward together in a positive manner. Since then, Bentley is back to his old self and they have been schooling Training Level Test 2 in hopes of showing him in August for the first time. Savannah is positive that if his progress continues at this same rate that he will be more than ready for the Makeover in October.

“I don’t feed on any time schedule. I believe it encourages two bad things — colic and bad behavior.

While Lindsy doesn’t stick to a specific time schedule, she does feed her horses twice a day — once in the morning and once in the evening. “They eat when I eat and if we are still riding or working late, they get fed late and I can sleep in an extra 30 minutes the next day!” Throughout the day, all of her horses have access to hay and water 24/7, but she sticks to her twice a day plan for feed, alfalfa, and supplements.

Fergie was a tough challenge in the state in which she arrived to Lindsy. She had really bad ulcers as Lindsy tried to adjust her to her new diet schedule. Even after just a half scoop of grain, Fergie coliced. Thankfully, Lindsy was able to connect with Fergie’s track owners who informed her that she did best on UGuard. After three weeks of controlled dieting and some help from the UGuard, she was able to up the mares feed to six pounds of grain, a scoop of UGuard and three flakes of hay in the morning, and six pounds of grain, a scoop of Ugaurd, and two flakes of alfalfa at night. 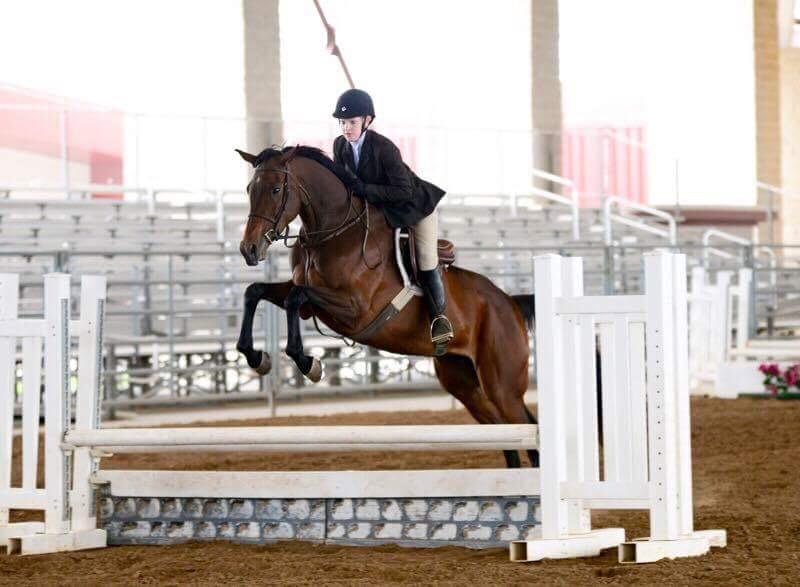 Lindsy had Fergie in the Peter Pletcher’s “Three Steps to Success” and they were making great progress on step two when Lindsy felt something just wasn’t right. When she took her stud to the vet for collection she tossed Fergie on the trailer as well for an exam and was shocked at the results. Unfortunately, Fergie is battling some soundness issues in her hind end most likely from track life — so much so that she would not excel as a performance horse without continuous care and injections. Lindsy didn’t feel it was right to subject Fergie to that and rather opted to have her bred that day while at the vet. While Fergie is going to be unable to make it to the Makeover, she has a forever home with Lindsy. She hopes to have some mini Fergies on the farm over the next several years. Lindsy is currently on the hunt for her new Makeover mount in hopes she can still compete in October.

Unfortunately, Nicole reached out to me this month and was unable to provide responses for this articles prompts. After some contemplation, Nicole is considering pulling herself and Sly from the Makeover so she can better allocate her time to some other things going on in her life at this time. We wish Nicole and Sly the best of luck with their future endeavors and will truly miss reporting on the pair’s progress.

While it is sad for us to see a few familiar faces go, this is the reality of training for the Retired Racehorse Project. As we continue to mark months off of our checklist, we will see some tougher challenges face our trainers and it will be interesting to see how each one overcomes those obstacles. Countdown to the RRP: four months!