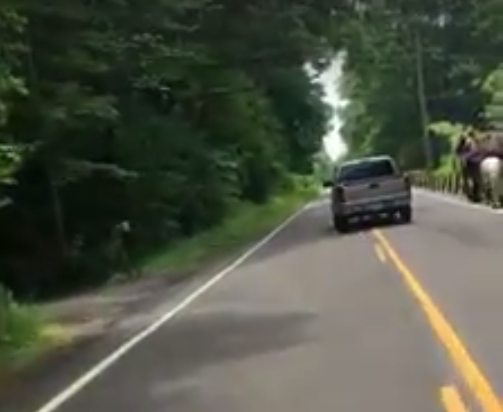 Warning: video contains language and gestures that are not safe for work or for young viewers.

A Facebook post is going viral today showing a terrifying scene: a man in a truck appears to be in a verbal altercation with a driver who is following her children as they ride down a road in Connecticut. The man speeds across the road, driving towards the riders while honking his horn before speeding off; one horse visibly spooks. The driver takes off after the man, who stops his truck and gets out to shout at the driver (this is the part of the video that earns the warning for language and gestures, so viewer discretion is advised).

While there is no way to know the circumstances that took place prior to the video being filmed, it is in no way okay for a driver to intentionally attempt to spook horses on public roadways by any ethical, moral or legal argument, no matter what might have happened or who was originally in the wrong or who provoked who. (For example, it’s unclear whether or not the driver of the car was on the wrong side of the road initially blocking traffic or had cut the truck off — regardless of whether or not both of the drivers were in the wrong, there’s absolutely no way to justify the truck driver’s attempts to spook the horses.)

Connecticut statutes on riding on the road state clearly:

“Each operator of a vehicle approaching a person riding a horse on a public highway shall reduce speed, proceed with caution, or stop if necessary, to avoid endangering the equestrian or frightening or striking the horse.”

“No operator of a vehicle in the vicinity of and equestrian and horse may blow a horn, or cause loud or unusual noises, in a manner to startle or frighten the horse.”

The full statute can be viewed here.

Horses generally have the right of way on most roads, barring limited access state highways. Unfortunately, as rural areas for riding grow more and more rare, especially in Eastern states facing continued development, riding on the road is often necessary to access equestrian spaces. Drivers increasingly in a hurry ignorant of road laws and equine nature pose a threat to equestrians on the roads, and in extreme cases such as this one, might go out of their way to intentionally try to harm a horse or rider.

Fortunately, the horses and riders in this video were unharmed.

UPDATE 6/24 2:45 PM: We were able to reach Meg Gaul, the videographer, and learn more about her side of the story.

“The two girls in the video are my daughters, a 14 year old and a 22 year old. One of the horses is good on the roads, and the other is a work in progress. It’s about .4 miles from the barn to the trails; because the mare is still getting used to the roads, I follow behind my daughters with my flashers on and window open, and when a car comes I signal for them to slow down. Many people are very gracious about this.

“In this situation, my daughters were riding single-file down the road, and I saw this guy in my rearview flying up from behind. I motioned for him to slow down the truck, and the horses were starting to get antsy so I actually moved my car over a bit to make sure they weren’t stuck between me and the guard rail. The guy came flying up between the driver’s side of my car and the side of the road and started screaming at me to get those —-ing horses off the road. I said, ‘my God, these are my children, please slow down’ and he kept screaming, so I grabbed my phone and started the video. That’s when he took off and started beeping at the horses, intentionally trying to upset them with my children on top.

“My 22 year old yells to me to go get him, meaning his license plate, so when the girls looked like they were okay I went down the road to try to get a picture of his plate. All I was trying to do was get close enough to see his plate. When he stopped and got out of the car I honestly thought this man was going to pull out a gun and shoot me in front of my children.”

Gaul has filed a police report. We will continue to follow up on this story and share the outcome with our readers.