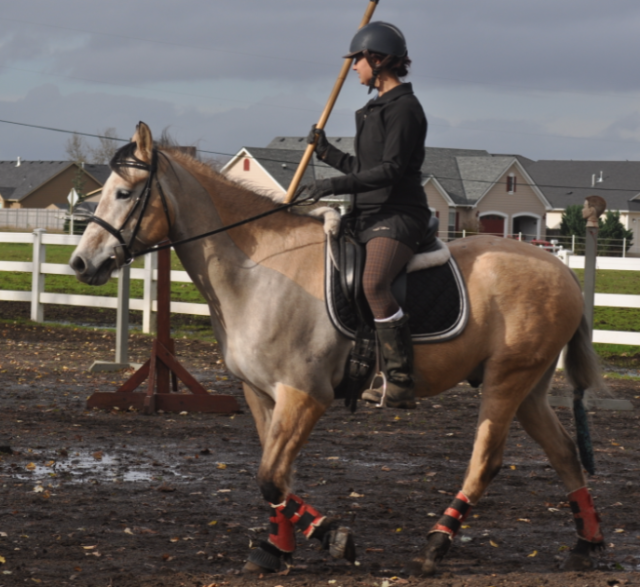 Proving that if you can think of it, it exists, Biz Stamm reports on a clinic she took in the fall with medieval mounted weaponry expert Troy Griffith. It’s exactly as [email protected]$$ as it sounds.

After seeing all of the incredible mounted combat in Wonder Woman last week, I was reminded of an excellent clinic I attended this past fall. Hands on Horse Training in Aumsville, OR, run by mounted weaponry extraordinaire Troy Griffith, frequently offers clinics combining classical riding theory with weapon-wielding bad-assery! Keep in mind that classical horsemanship was developed for use on the battlefield, something we so quickly forget while partaking in our sandbox-bound prancing competitions.

Don’t get me wrong. I LOVE competitive sandbox prancing, but when I noticed there was a mounted medieval being offered so close to home I thought it would be a great opportunity to get back to the roots of my sport while exposing the baby horse to some new and interesting things. 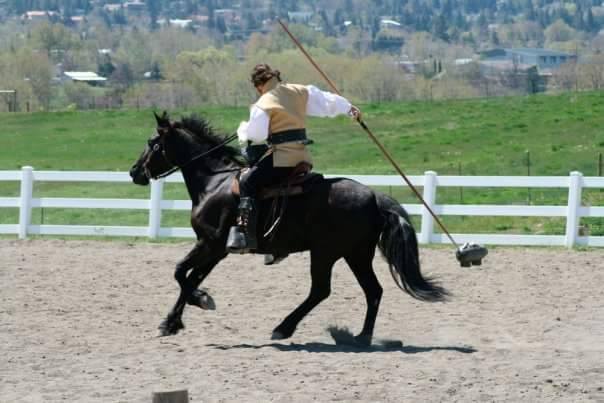 The day of the clinic was a rainy blustery one because… well… Oregon, and it turns out that the other clinic attendees decided that riding outdoors in that kind of weather was not something they wanted to do, meaning private weaponry lesson for Biz! This actually turned out to be quite fortuitous because I wound up needing all the help I could get.

First things first: in order to wield a weapon, one must be able to ride one-handed. At the time of the clinic, my little horse, Helix, was still quite green. I had spent a little time in the week prior to the clinic making sure that Helix would turn off my seat and leg which he did pretty well. He did pretty well the day of the clinic as well… until the practice lance was added to the equation.

It turns out that carrying a giant lance in one hand (and the one I was using was quite small compared to the one Troy was using to demonstrate!) will change your balance a little. Throw in my lackluster motor skills and grace of a newborn foal just learning to walk and we had a full blown mess on our hands. I really struggled to properly weight my seat bones and the fact that Helix didn’t deposit me on the ground with how much I was bumping him with the lance speaks to his incredibly generous soul. 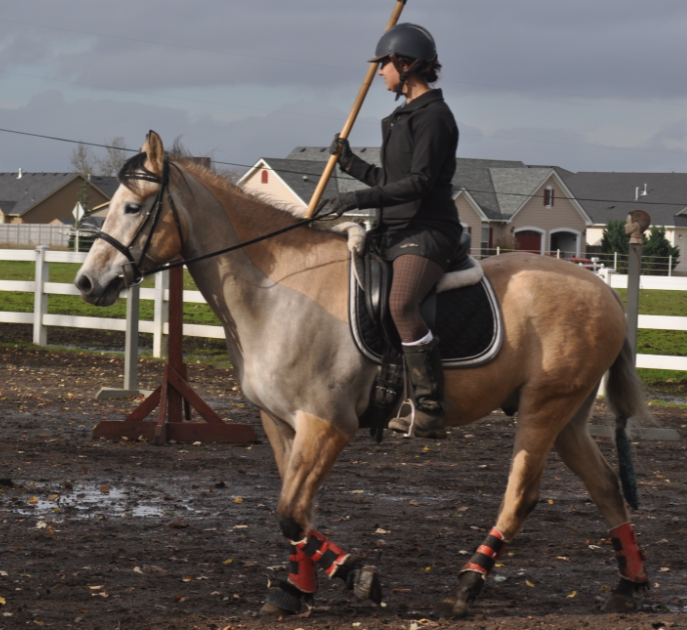 “What the heck are you doing up there?!” Helix wonders. Photo by Ana Barros.

About an hour into the clinic, we were starting to get the hang of the whole steering with lance in-hand thing (kind of) so Troy had us approach a target at a breakneck… walk. (What were you expecting? Gallop? I could barely steer!) When approaching a target, you must go from resting position with the lance perpendicular to the ground to ready position with the lance parallel to the ground, pointing at your target. As you move past the target, the lance goes back into resting position. This involves twisting your wrist in a fashion that appears quite simple, but that I found shockingly difficult. 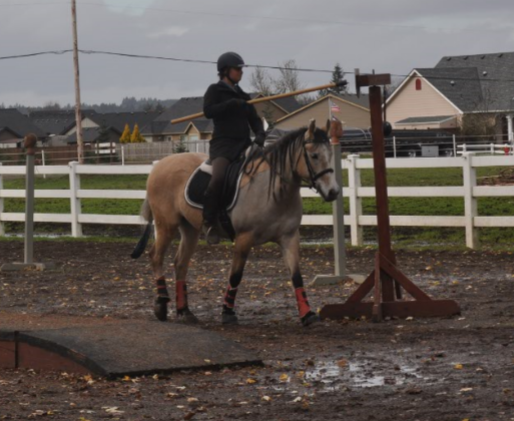 I challenge you to a joust! Photo by Ana Barros.

After we finished with our lance training, we moved on to swordsmanship. I have an extensive LARPing (live action role playing) history from my super-cool existence as a high schooler, so I was pretty sure I was going to be awesome at this part of the clinic.

For swordsmanship, we were to weave in and out of a set posts, similar to pole bending, while knocking a head off each post as we moved past it. Again, steering proved to be a bit of an issue at first, but we actually did OK after a couple attempts. The exercise was made even more fun when Troy told me to imagine the heads on the posts as the heads of my enemies. At first I had trouble coming up with people I would consider enemies, but after a little bit of thought, I decided Handsome Jack, Lord Voldemort and that guy who tailgaited my horse trailer would do just fine. 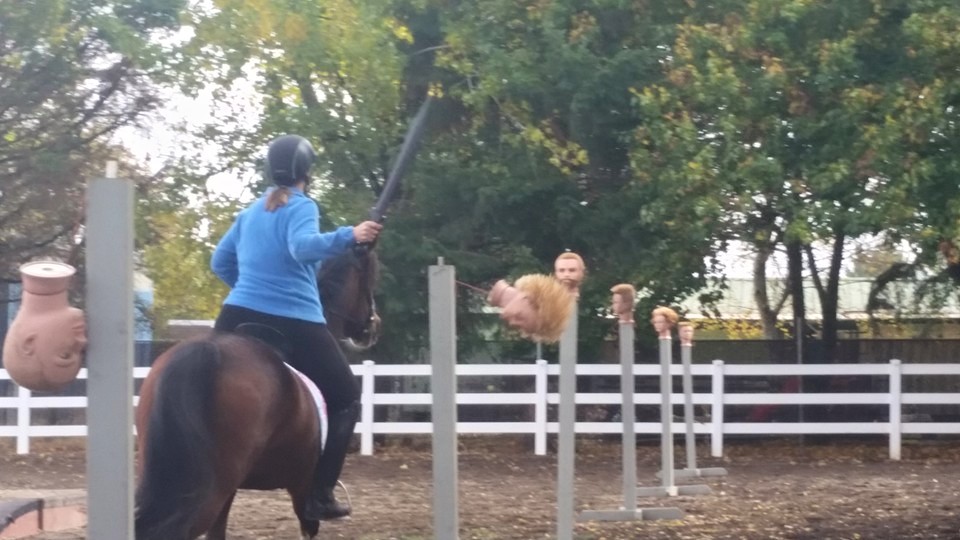 A rider takes on a row of heads at a previous clinic. Photo by Biz Stamm.

We paused for a brief lunch break during which I got to eat pizza and pet some puppies. For the afternoon session Troy generously offered me the use of his horse, Jupiter. Baby Helix was clearly tired, and Troy thought it would be fun to try out some of the weaponry exercises on a horse that was trained for the job. Boy was he right!

Jupiter expertly guided me through the same exercises which had seemed so difficult on Helix. It wasn’t just that he was trained for this particular job that made the ride so enjoyable — it was that he was generally a well-trained, seasoned horse. I think so often the specialists of horse sport forget about the enormous benefits of having a well-rounded equine partner. Sitting on Jupiter reminded me of that, and it is a concept that I have kept at the forefront of Helix’s training ever since. 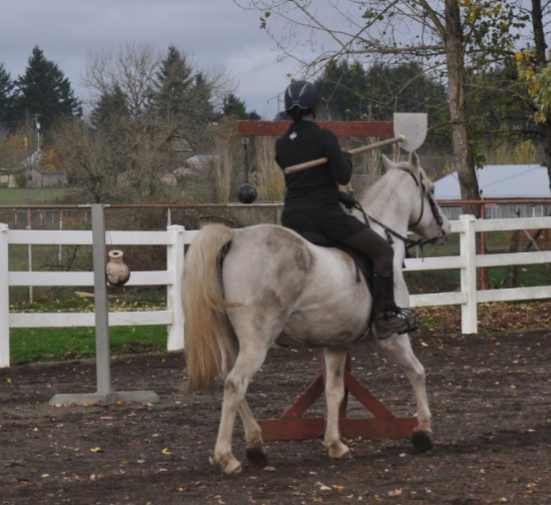 Jupiter bravely carries me towards the target. Photo by Ana Barros.

While I definitely struggled a bit during the clinic, it was a good, productive, and FUN struggle. Helix and I still have several weapons to try out, so we will be planning a trip back to Troy’s sometime in the near future. Until then, I will just have pretend I’m wielding a sword as I ride my voltes and leg yields. 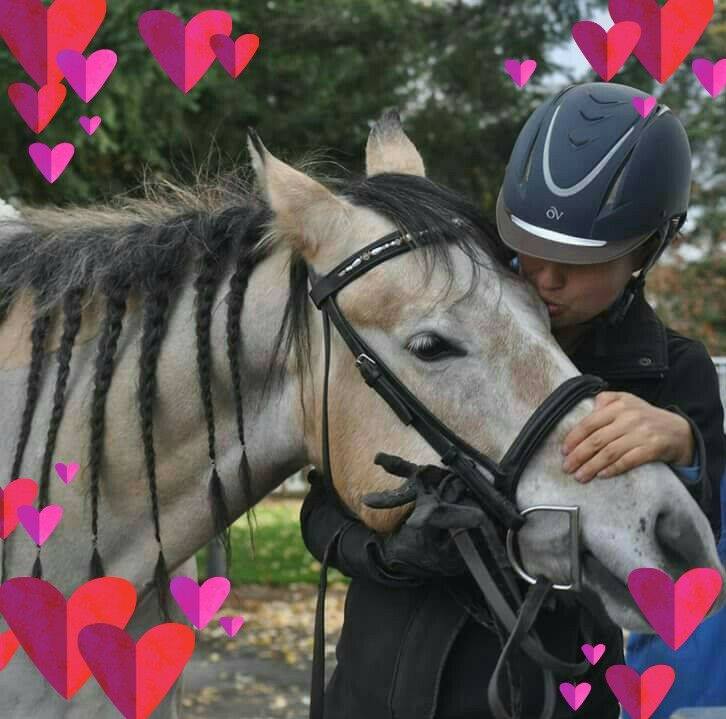