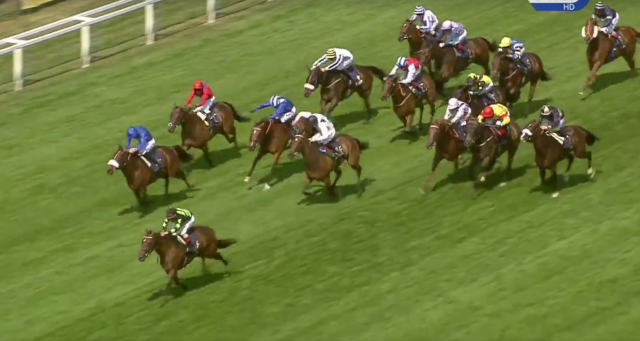 Keeneland-based filly Lady Aurelia definitely made a statement on Tuesday at the prestigious Royal Ascot meet in England, winning the Group 1 King’s Stand Stakes with ease.

We’re in the golden age of fillies and mares in the American horse racing world: with such superstar ladies as Beholder, Songbird, Lady Eli and Tepin to follow, it feels as though the world of female racing has never been stronger. The latest rising star to follow is Lady Aurelia, a Keeneland-based filly making serious waves internationally.

Lady Aurelia won her maiden start at Keeneland as a two-year-old, then daringly traveled overseas to Ascot, where she won Group 2 and Group 1 stakes as well as a third-place finish in the Group 1 Cheveley Park Stakes. These accomplishments earned her the Cartier Champion Two-Year-Old Filly title in Europe; she returned to the States for a layoff and then won the Giant’s Causeway Stakes back at Keeneland in April.

This resume is already impressive enough, but Lady Aurelia is far from finished: yesterday, on a return trip to Great Britain, the three-year-old filly won the Group 1 King’s Stand Stakes at Royal Ascot by a resounding three lengths. Jockey Frankie Dettori was out with an injury, so John Velazquez stepped up to substitute in. Watch the pair conquer an all-star field:

Lady Aurelia is the 18 horse in black and green silks (look towards the middle of the track):

Lady Aurelia’s victory is not just a big win for her connections but a win for American racing as well, as Royal Ascot traditionally draws the best of Europe. Another superstar mare, Tepin, helped prove that American horses could in fact run without the customary raceday Lasix, an anti-bleeding medication that is standard for many horses in the US. Lady Aurelia’s victories help prove the same, that American horses can run with the best in the world.