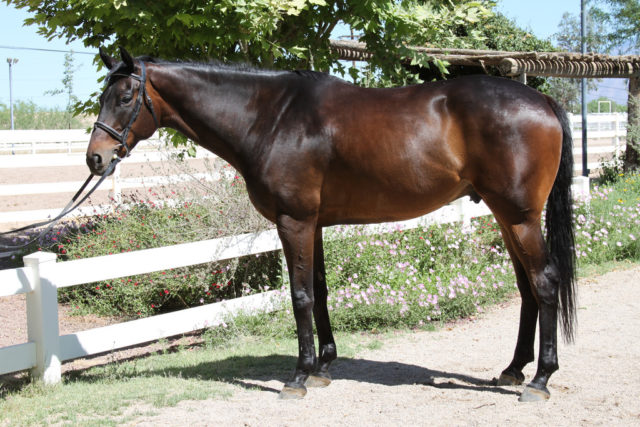 Jaclyn M. Johnson shares her knowledge, preferences, and deal-breakers when it comes to looking for the perfect OTTB project horse.

Today, in just a few hours, I am going to go evaluate an OTTB. I am considering taking this horse on as a quick project. This would likely be a 60-90 day project that I will try to re-home rather quickly, since I already have a more long term project underway.

Two years ago I attended a clinic with Kenny McPeek where he reviewed his criteria for evaluating yearlings at the sale. While not all of the specific information stuck with me, one saying in particular plays like a record in my mind now when I evaluate potential sport horses. Kenny kept saying:

“I don’t look for one or two qualities in particular. Instead, I try to take them all together in consideration. I am looking for a constellation of qualities, not a particular, isolated star.” He told the story of finding and purchasing Curlin for clients. Apparently Curlin had an ankle the size of a grapefruit. But because all the other stars arranged in such a way, McPeek was not deterred from purchasing the colt, a decision that changed the trajectory of his career.

Curlin on his way to the starting gate of the Breeders Cup Classic. PC: Wikimedia Commons

I love this philosophy. Consider it further – a lot of very famous and successful sport horses have something wonky about them conformationally or perhaps their attitude is challenging. You will never find the perfect horse, because it doesn’t exist. Instead, you have to find an arrangement of stars that forms a constellation that you can be successful with – and that is the key.

So what are the specific stars that I consider for an OTTB sporthorse prospect? Well, there are many, but I will review the big ones here. Again, it’s almost an interpretive dance of holistic evaluation, so even writing these things down is difficult. It depends on the horse, the goal, the arrangement of stars.

Herd dynamics are a very quick and dirty way of figuring out what type of personality the horse has. It’s not perfect, but it can give you a good glimpse into their mind and subsequently, what training methods will be successful. Here are some general thoughts and patterns I’ve seen:

I don’t ever eliminate a potential horse because of herd dynamics. I’ve never said, “that horse is too [insert level of dominance here]”. But, I do use it to gauge how successful I can be with them and subsequently how much I will enjoy working with them.

I tend to like horses that are somewhere in the middle of the spectrum. Not brash bullies and not total chickens. The brash bully generally requires someone who is willing to assert dominance. Which I can and will do, but it isn’t my favorite thing. I don’t live for battles, and I don’t want to die on every hill. So generally, I let someone else take on the brash bully. I also just enjoy the process a lot less when I have to be on guard to avoid being bit or kicked or trampled.

The chicken? He can surprise you sometimes. Don’t always rule out the chicken. Often times, once away from other horses and with the right person, he can gain some emotional self-control and independence. He may not be the fiercest of competitors…. but, most horses aren’t. That doesn’t mean he can’t learn a skill and be incredibly useful to someone as a lesson horse or fulfilling some other lower-level career.

The mid-range horses are generally where I look, if given the choice. A horse that can walk other horses off their hay quietly is actually pretty dominant. But not in the brash bully kind of way, in a cool calm quiet kind of way. And these horses are my favorite – the quiet leader. They are independent, but they are also not insecure about their relationship with the herd. This makes them good workers because when they leave the herd, their mind doesn’t stay back with the herd like an insecure horse’s will. They show up to work, and they are mentally present… making them generally the easiest to train.

An OTTB being evaluated for conformation. PC: NetG15/cc/Flickr

Typiness is a bit of an abstract concept, but I use this a lot. Essentially, typiness just means does the horse’s physical stature predispose them or set them up to be particularly good at a certain type of job. So a “typie” hunter will be round with a rangy neck and lofty canter, a “typie” eventer will have a ground covering stride and cat-like feet, a “typie” dressage horse will be naturally inclined to rock back on its hocks.

I like to see a really typie horse, although I don’t care what type specifically. Typie horses are just easier to train and easier to resell because their constellations have set them up for success. Imagine trying to make a reiner out of a 17.2  Holsteiner. You would literally be working against the very forces of nature and would probably only see marginal success over an extremely long timeline. Now, imagine trying to make a reiner out of a compact, quick quarter horse. It’s no coincidence that certain sports are dominated by certain breeds that have a physically superior response to the questions being asked.

An OTTB has a second career in dressage. PC: NetG15/cc/Flickr

This one is tricky because a horse just coming off the track will have a particular way of going but it is probably going to change significantly with some R and R. But, evaluating their way of going initially is a good baseline indicator of what their way of going will be like in a few months. I like to evaluate the walk and the trot the most, and generally this is all that is feasible.

At the walk I look for a few things. First, I want to see that they don’t have a completely lateral walk. Second, I look for a hint of suppleness. Do they look locked in a position with their body, or do they look like I could make them into a spaghetti noodle? The walk is often a good predictor of the canter. So if they have a lousy walk, I assume the canter will need massive amounts of work. And of all the gates the walk is the hardest one to change and improve. So I put a lot of emphasis here, even though it’s a bit unconventional.

Third, are they striking the ground evenly on all fours? Unevenness may be an indication of lameness. Fourth, I like to see a big walk. Big walks indicate the horse is not on his toes, and he is generally forward going. I give some grace here if they are on their toes due to situational factors.

At the trot, I really don’t look for all that much besides straightness of their motion. I don’t want them to move like a duck or a sewing machine. I know it doesn’t bother some, but I personally cannot stand a paddler, so I generally avoid them. Obviously, I would love if I could see them stretching down and elongating, but sometimes they just aren’t willing to do this yet and you have to trust that it is in there somewhere.

I also don’t like to see HUGE motion behind. This is simply a personal preference. It indicates to me that they are probably tight over their back, and this can take a long time to sort out and thus work against you in the retraining process.

Stars that don’t get considered

While I have a long list of things I look at, there are some things that I try to block from my own evaluation. These are things that might meddle with my overall impression of a horse and either prevent me from have a positive evaluation or sway me to discount negatives that I’ve already noticed. I try to pretend as though these things don’t even exist.

Color – there is no scientific evidence (or even in my case anecdotal evidence) to suggest that particular colors have different temperaments. The “chestnut” myth drives me nuts. I personally have a slight bias against grays that I have to work to counter, not because I think grays are associated with a particular characteristic but because SO many people want grays that they buy them whether they are lame or sound. Which results in a sport horse-world full of lame grays. I want the horse for the job at hand and color is just a distraction. Sure some colors may be easier to sell than others, but a quality horse is a quality horse and I trust buyers to be able to see that.

Breeding – Here in Kentucky it is easy to get swept up in “this stallion is known for [X] and his progeny are generally [mean, nice, lazy, etc.]. ” I try not to let any of these prior considerations determine my evaluation of the horse. Sure, certain sires throw certain temperaments, but there are always exceptions. My Dynaformer grandson will lick your face like a puppy dog while his grand sire was known for trying to bite people’s’ faces off. You simply can’t always generalize.

The exception to this rule is that I DO let breeding inform me about certain physical qualities. For example, Kitten’s Joy horses are generally conformed to make wonderful sport horses. Now that is useful information.

Size – Shakespeare said it best, “Though she be but little, she is fierce!” Sometimes mighty things come in small packages. If anything, I have a slight bias against big horses because of the potential soundness issues. But again, I try to hold this constant in my mind and not even consider size.

Soundness issues that have been resolved – the pool of unblemished OTTBs is relatively small. Most have sustained some type of injury or had some type of soundness issue over their racing career. Many of these have been completely resolved, rehabbed, and fully recovered. If I can prove to myself that the soundness issue is behind the horse, I try to not let it effect my decision moving forward.

For example, chip removal is not something that scares me away as long as I have evidence that the surgery went well and the chip was removed cleanly. That is a common OTTB issue, and most are cleared to go back into race training… which means if they can hold up to that, they can hold up for me. If we all ran away from the first sight of a previous soundness issue, most of these horses wouldn’t learn a second career. I try to be cautious but not flighty.

Go find an OTTB. If you want to minimize risk, buy one from someone who has already restarted one.