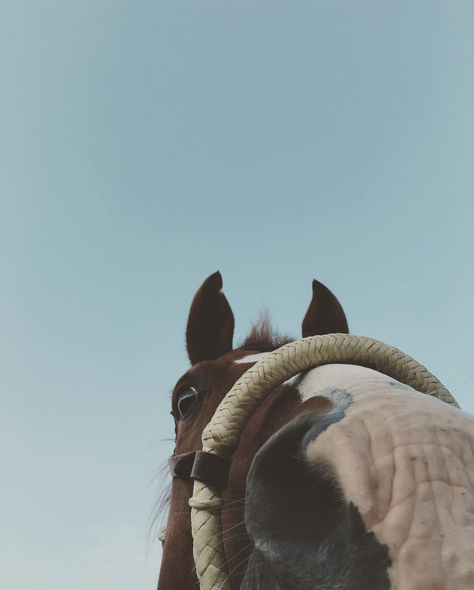 …and why I choose to ride other horses in bits.

There are a few subjects in the horse world that always seem to polarize equestrians: barefoot trimming vs. shoeing; blanketing vs. not blanketing; treeless saddles vs. traditional tree saddles… and I realize that by flying headlong into one such hotly-contested issue, I’m really asking for the comments section to turn into a battleground. Hear me out, readers. I think we can get through this one together.

A few years ago I first met Red. (He’s got his own hashtag — #redthecowpony.)

LOOKIT HOW FLIPPIN’ CUTE HE WAS THAT FIRST SUMMER I can’t even. Photo by Kristen Kovatch.

He technically belongs to my husband’s grandfather, but I’m going to go ahead and put in writing that he’s essentially become mine since I slowly took over the equine end of the family farm. The gist of the details that I got from Grandpa Allen was something along the lines of “that little red is a good working horse” so we spent the first summer together just getting to know each other, wandering the farm pastures and pushing cows around and eventually getting to work on some of the finer points of western riding.

And yeah, Grandpa Allen was correct — Red had a good work ethic, he neck reined and moved off the leg, he was pretty brave on cattle, he got much braver on the trail as we gave each other confidence about tackling new obstacles and some tricky spots. As far as “well broke” went, however, I was a little less confident: Red only had one consistent lead, he didn’t really pick up his back or use himself well, and every time I made contact with his mouth in the curbed snaffle I was riding him in, he tucked his nose behind the vertical and hung out there, often pulling his nose all the way in to his chest. There was no leg to hand connection, just this constant dodging of contact and a big “sucking back” of forward motion.

Admittedly, a large part of my reasoning for going in the curb in the first place was the long-held western belief that all horses over the age of 5 should be in a curb. This is true in the show ring, but there’s obviously no rules at all about riding on the farm and no real reason this horse HAD to go in a curb. Photo by Kristen Kovatch.

I spent a good chunk of the autumn and into the winter trying to drive Red up into a light contact, but it was such a touchy, fragile thing — if I took my mind off of the tightrope I was walking between forward impulsion and contact, even for a second, Red was either squirting out from under me or sucked back on the bit. I finally wised up and backed the curbed snaffle down to a loose ring, thinking it was time we went back and re-addressed some basics that seemed to be missing or otherwise hidden under years of past riders teaching this horse either intentionally or accidentally to duck the bit. The horse’s teeth were fine and he was in otherwise excellent condition — this seemed to be purely a training issue.

The snaffle led us to a bit more success (see what I did there), but I still wound up spending most of my ride fighting Red to go forward even with the slightest pressures on the bit. It was as though he had learned to move off of leg, and how to turn his face to bit pressure, but he had never had two and two put together to make four. We continued to wheel around the pasture struggling to put the whole horse together, me constantly trying to keep that balance between hand and leg.

This was a particularly unpleasant ride in blowing snow, but I can’t say we didn’t try. Photo by Kristen Kovatch.

I went back and forth with myself a lot during this period. If we were never going to show, why couldn’t I just make myself live with Red in his unconnected state and accept that fact that he would never be “put together” properly? He was getting by with cattle chores as he was, and he was still fun to ride, always game for a long canter across the meadow or a rugged trek up and down the creek valley. But another part of myself believed I owed it to this horse to help him travel correctly, make the most of his body and his movement, and improve his way of going. It was hard to live with myself as a horsewoman if I continued to let this horse drag us around on his forehand and turn like a dirtbike, no matter how much of a struggle it was to get him there.

On a whim, I found a secondhand bosal hackamore at a local tack auction, and just $10 later in the world’s shortest and saddest bidding war it was mine. The bosal is the traditional western tool of the vaquero, upon which so much of reined cow horse is based as a competitive discipline. Ideally, the horse is started in a bosal and then transitioned to a bit, eventually becoming what’s referred to as a “bridle horse” able to travel with the lightest of cues in a spade bit and romal reins. As I slipped the bosal over Red’s nose and adjusted the hanger, I mentally shrugged. We were moving backwards, from a traditional training standpoint, but ducking the bit couldn’t possibly be an issue if there WAS no bit… right?

I’m oversimplifying here by leaping right to the end of this story, but essentially… I was right. I’m not saying it was a miracle overnight change, that Red suddenly started loping around like a National Reined Cow Horse bosal champion, but removing the hurdle of trying to get him in front of my hands and from ducking the bit meant that I could focus my energy instead on helping Red use his body correctly whether tracking straight or making a turn. He started to learn — or more likely, to remember — how to use his hindquarters beneath him as his engine, lifting his back and staying out of his own way.

For this particular horse, the bosal was the key to unlocking a door I thought we’d never be able to open, or at least not without years of frustrating work. Since I have zero plans to set foot in a show ring with Red, I don’t see it as a problem that he’s essentially had to rewind to babyhorsedom in terms of tack if he’s finally stepping up in cowhorse ways I never imagined.

But that’s not to say that I’m ready to go through my tack room and chuck out all of my bits. Sure, you might think that perhaps with such a dramatic, positive experience putting up the conventional bit and going to a bitless bridle I might be a total convert now to the wonders of bitless ways, ready to proclaim my love to the world and encourage everyone from the lady up the road to Beezie Madden to ditch the bit. I don’t think bits are barbaric. I believe the bit is a tool, and in the right hands it can be an effective form of communication from horse to rider. This horse in particular simply communicates better without one.

Should Red decide tomorrow that the bosal no longer works for him, but the loose-ring now does, you know what I’ll do — heed what my horse is telling me. Should another one of my horses speak up and let me know that the curb bit isn’t working for him, I’ll give that bosal a try.

Riding shouldn’t be about prescribing to one set of beliefs and devoutly defending that point of view until we’re all blue in the face and refusing to listen to each other. Working with horses is a dynamic relationship, and what works for one horse won’t work for another. All we can hope to do as horsemen and horsewomen is be able to listen.

So that’s why I ride Red bitless. And that’s also why I ride my other horses in bits. To each horse — not the rider — his own.