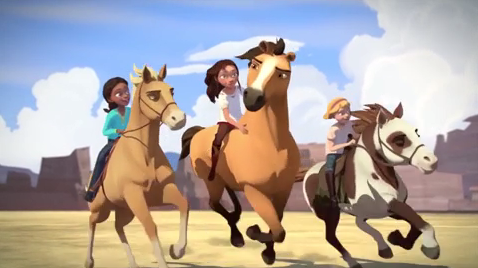 Biz Stamm braces herself for disaster in the spin-off Netflix series Spirit: Riding Free… and finds a lot to love about this latest adventure for young horse lovers.

Spirit: Riding Free is a spin-off of the Oscar nominated Spirit: Stallion of the Cimarron with Season One now streaming on Netflix. As the very proud mom of my own Kiger Mustang (the breed on which Spirit was based), I knew I had to give this series a watch. The story centers around Fortuna (Lucky) Prescott, the daughter of a railroad magnate who has moved from the city to a small town out west. There she befriends a group of girls and the wild stallion, Spirit, and oh the adventures they have!

In case you were wondering, he totally still has eyebrows.

While this show had all the makings of a cliche horsey piece (a young girl who has lost her mother befriends wild horse that only she can handle despite having zero experience with horses), and was clearly made for the target audience of children 2-12, I found it quite watchable and possibly even enjoyable as a childless 30-something. After pondering for awhile about just what it was that made this show so compelling for me, wondering if that biological clock thing everyone is always talks about was finally telling me to make some mini-Biz’s (Sorry Mom and Dad. That’s still a big N-O!), I was able to come up with several components that make Spirit: Riding Free better than your average children’s show.

Coherent Story-Telling With a Purpose: So often it feels like children’s shows are little more than vehicles for funny noises and silly catch phrases. When I was in college, I worked at a daycare one summer and I remember cringing every time I’d hear a wacky catch phrase in a trailer for the latest kid’s movie or TV show because I knew I’d be hearing children scream it for the next month. My head hurts just thinking about it! At any rate, each episode has a well-constructed miniplot, and while I haven’t finished the entire season, it seems as though a cohesive through line is beginning to fall into place.

A Diverse Group of Well-Developed Characters:

It would be so easy to make characters one dimensional as many characters are on children’s shows, but these characters are complex and multi-faceted. Lucky and her friends can generally be classified as “good,” but despite their innate goodness, the show also reveals their flaws and their ability to make bad and/or tough decisions that not everyone agrees with. The show also does an admirable job showing the humanity in characters one could all too easily write off as “bad,” often addressing why a person might end up having undesirable personality traits in a way that invokes empathy instead of malice. I find that to be a very positive thing.

Clever Writing: It seemed to me the line of dialogue “My name is Fortuna, but you can call me Lucky,” was a wink and a nod to the adults in the room who may know a thing or two about Latin root words. At any rate, the show seems to acknowledge that adults may find themselves forced to watch the show from time to time and the writers’ efforts to say “We see you!” to parents is quite charming and appreciated.

The very clear message that “horses are awesome!”: On top of being a fun show with good life lessons, if you’re looking for a way to introduce your child to some horse-loving indoctrination, this show is your answer! While many things on the show are completely unrealistic and overly fantastical, it truly captures the magical relationship that can form between a horse and his person.

For the above-mentioned reasons I give Spirit: Riding Free an enthusiastic 4/5 carrots. So go ahead. Give it a watch.  Show it to your kids, and if for some reason, such as illness or injury, you find yourself unable to make it to the barn, It is far from the worst thing you could binge on Netflix (I’m looking at you, Fuller House!)