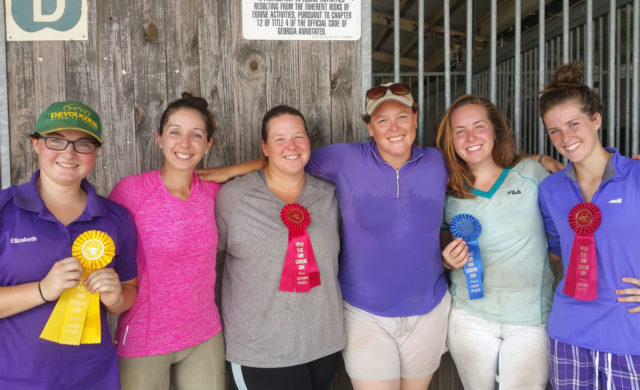 If you and your horses have ever had a particular “nemesis” jump or obstacle, you’ll understand exactly how Ainsley Jacobs felt about a certain fence at a certain event.

Adult amateur event blogger Ainsley Jacobs has been chronicling how she finds the takeaway lesson from the good, the bad and the ugly in her equestrian experience. Her horse JJ has been rehabbing from a ligament injury for a few months, so during his layoff time Ainsley is revisiting earlier lessons in her experience. Today’s story is from August of 2015.

Ever since JJ spooked and stopped at the American flag jump at Poplar in July, I’ve been equal parts excited to go back, and terrified to go back. I knew one day I’d have to face my fears and try that jump again, and this was the weekend we made it happen.

A small group of Go With It Farm riders trekked down to Poplar for another eventing weekend. Unfortunately, once again my husband’s work travel made it impossible for him to be with us, but that’s okay. It was rather fitting since he missed the show that I fell off at, too.

Cross country schooling was easy peasy, and after we all got done, I asked my trainer if I could school the American flag jump in stadium a little, to help alleviate the slowly-brewing panic attack that was threatening to present itself on horse show day. Normally we don’t school stadium prior to the event, but after some desperate (pathetic) pleading from me, she agreed.

We started just by trotting through the fence with a pole on the ground – it wasn’t even a jump. I was feeling completely sure that JJ wouldn’t bother to look at it until the actual jump went up, but he surprised me and tried to stop again. So weird! He really hates that jump. Somehow, I kept him going, and we “jumped” the scary ground pole. We finally raised it to about tadpole height and schooled it from each direction a few times until he was going over it smoothly and confidently, then called it a day.

On Saturday morning, we had our best off-farm dressage score to date. The new saddle is really helping a ton with my position which helps me ride more effectively, and it reflects in JJ’s movements. We got an awesome 34.50 on our Beginner Novice B test, although I had no clue we had done so well until the end of the day when I finally checked the scores.

After dressage, I had a few hours before my ride time for stadium. I was SO nervous, and SO freaked out about the American flag jump that I knew sitting around waiting was only going to mess me up mentally, so I took a nap in a folding chair outside JJ’s stall. It was an awesome decision because I got some extra sleep and couldn’t be nervous while I was asleep! Score!

I tacked up for stadium, and gave JJ a little pep talk. Basically, I asked him to please be nice to me, to please jump all the things, and to please not kill me. I think he said “okay,” but I gave him a few peppermints to butter him up, just in case.

The American flag jump was the second jump of our course this time, and it was part of an outside line, not a standalone hanger like it was when I got dumped. I was so focused on riding that jump defensively, and clearing number two, that I completely disregarded the first jump and we knocked a rail. It wasn’t the way I wanted to start my course, but my focus was on attacking the American flag jump and getting over it on the first try – which we did! We jumped everything else without any issues, and I was SO relieved when we walked out of the arena and I was still on the horse!

We finished out our day with another clear cross country course, and I was so happy to have done well again. I’ll still be nervous about the American flag jump in the future and ride it more carefully, but getting through this event was a big confidence booster for me.

The rail down in stadium hurt our score and we finished up in 8th overall. My nonexistent ribbon sure felt like a big ol’ blue one to me.

Sometimes the best prize is simply overcoming your fears and succeeding. Measure your achievements and accomplishments relative to yourself – not the competitor’s score sheet.