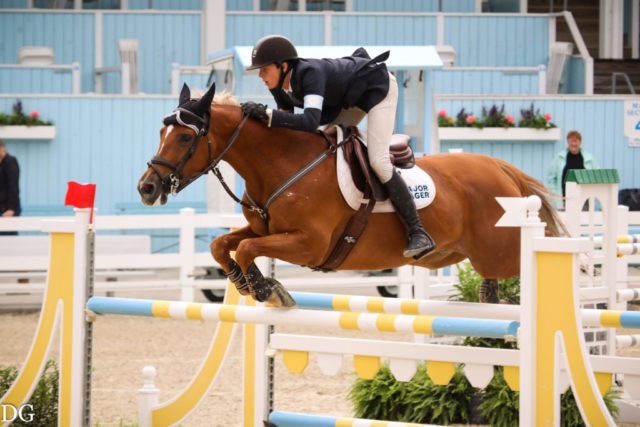 He might only have his learner’s permit, but this junior rider is wise beyond his years.

“Oh yeah, watch out for him, he’s a licker,” Brian Moggre mentions as his hunter ride MTM Fashion reached over to greet me himself. I had finally caught up with him at the gate at the Devon Horse Show’s Dixon Oval, where he held the reins to MTM Farm’s MTM Fashion, with whom he was leading the Small Junior Handy Hunter 15 & Under on Saturday morning. Brian, after all, doesn’t turn 16 until August.

“I’ve got my learner’s permit,” he confides to me. “So watch the roads.” It’s incredible to think that this junior rider has already won a Grand Prix (last summer’s $50,000 Lamplight Grand Prix, just a few days after Brian turned 15) and isn’t old enough to actually have a driver’s license. But Brian hasn’t always done things in the usual way.“I didn’t do the pony hunters,” he states. With a previous trainer — he now rides with MTM Farm and Mike McCormick — a young Moggre piloted an Icelandic pony through the .85 and .90 jumpers.“He wouldn’t tölt in Iceland! So they didn’t want it. So the trainer I was with at the time got it, and when I came along, I rode her. She was just a lesson pony, but she would do whatever we needed her to.”Brian now has a full quiver of horses to show, and four of his string were with him when he met up at Devon: MTM Fashion in the junior hunters (also shown by Tracy Fenney in the first years in the second week), Condor in the equitation, and two jumpers including his own fiery MTM Flutterby and DDM Equestrian LLC’s Condero III. And this is exactly what he wants his life to look like across all three rings

“My long term plan is to compete in the jumpers, but to have some hunters too — I want to have my own business and make a living out of it. This is what I want to do for the rest of my life. It’s maybe far-fetched, but I want to ride in the Olympics someday; hopefully, some Nations Cup teams when that comes around. I want to take some equitation clients, but when I’m older and more seasoned.”

Brian went on: “I don’t want to start having my own business and clients and everything as soon as I turn eighteen — I need time to develop as a person as well as a rider, to know how to run my business and how to manage. It’s worked great for other people in the past, but I’d rather be safe than sorry and take my time — I have my whole life to figure this out.”

Developing as a person? Becoming more seasoned? Learning to run a business? This was the talk of a person far wiser than one would assume a fifteen-year-old could be.

Brian grins. “My dad is big on goal setting. We started that when I was quite young — we’d sit down at the beginning of the year — we still did this in January — literally with a pen and paper, and write down my goals for the year, whether it’s horse shows I want to attend or horses I need to go to the places I want to attend. So a goal for me for this year was to be successful in the hunters, jumpers and equitation at Devon, and so far that’s going as planned; I’m happy with it.

“It’s so much easier when everyone’s on the same page of what you want to do — and it’s not necessarily win, win, win all of this, but it’s more going to Young Riders and having clear rounds, doing this and doing that. It’s knowing what you need to do when, and if it won’t work out this year, then it goes on the goal list for next year. You take it easy and strategically plan what you need to do.”

To have such a foundation at age fifteen didn’t come by accident, of course, and Brian credits his parents for incredible support despite not coming from an intensive equine background. “We weren’t a horse family when I started, but my parents are so into it now. They tell me that there was a barn down the road from us when I was little — I was two, almost three, I don’t remember this — and I always wanted to stop and pet the horses. I started pony ride lessons and technically you had to be five years old, so I was five for three years. I’ve been doing this for as long as I remember and I can’t imagine not doing this at all.

“My mom comes with me to all of the shows and it takes up a big chunk of her life. I’m so grateful she’s willing to do that.”

Even with the pressure of meeting goals, building strategies and executing the desires of owners, trainers, and parents, Brian still shows keen self awareness that this is all part of his childhood experience and not letting it slip into a massive pressure cooker.

“I think it’s helped me greatly not to get too wound up, and to have fun with it still. I’m still a kid, and I want to be a kid, but I’m in such a professional business that I need to switch on and off for when everything needs to come together.”

Brian Moggre’s parents, of course, can be assured that they’ve raised not only a rising star in the equestrian world but a young man much wiser than his fifteen years. In this sport which is truly a lifestyle, what more could you ask?

Moggre and I parted ways as he led MTM Fashion back into the Dixon Oval to claim his blue ribbon, having won the Small Junior Handy Hunter 15 & Under. It wasn’t Moggre’s first blue ribbon, nor will it be his last.