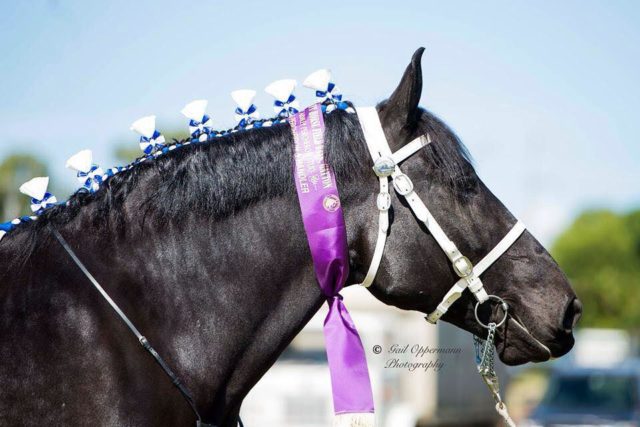 Show season is in full swing, and so are the fabulous manes!

Well, the next time I want my horse braided, banded or mane rolled, I think I’ll just put a call out to our readers, because Horse Nation certainly has some talented grooms out there (or at least they know where to hire one!).

Well, for the most part. There was this one:

My Mare sporting the efforts of some summer pony camp campers after learning to braid for the first time. Safe to say she was not amused with the style, but she was a tolerant teacher. Photo by Danielle Keating

Okay, she gets a blue ribbon just for patience.

“Mr Magee” A pure Kaimanawa wild horse from New Zealand posing for his photo. He loves the camera! Photo by Jill Dickie

Mandy Endfinger: Taken by my husband Sean Endfinger at our first show of the year.

Josie LaForge: The mare I used to lease, owned & braided by my trainer Jessica Pilley, Photographed by Terri LaForge.

“But mom, braids make me look like a girl” Hackney pony Tuffy, photo by Kayla Webb.

Just playing around with some rubber band braids. Photo by Jessica McDonald

Cheyenne and a French braid. Photo by Madison Anglebrandt

Photo by Sierra Isak Horse: Penny For My Assets – AQHA.

A post shared by Thorsten & Allison Zarembowicz (@zarembowiczsporthorses) on Jun 7, 2017 at 1:36pm PDT

Is he ready for jogs or the wedding!? The world may never know! #thoroughbred #eventing #horsenation #braids #ohyoufancy #ottb #superlew

If your fingers aren't sore by the end then you're just not doing it right. #horsenation