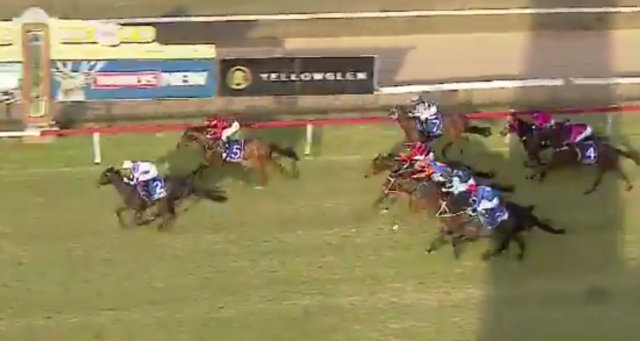 If you’re still on the fence about following horse racing — yes, even if horses like California Chrome or American Pharaoh or even this year’s sentimental hero one-eyed Patch aren’t enough to get you excited — we may have found the horse that will change everything for you.

We’d like to introduce the newest winner in Australia, Horsey McHorseface. And yes, that is his real name.

He’s done it! The people’s horse Horsey McHorseface breaks through for his maiden win at #Cessnock. Congrats to connections & @BBakerRacing! pic.twitter.com/hMVZ3Is5U4

As you might expect, most of the internet is just laughing at his name, so stats on this horse are actually kind of hard to find. What we actually want to know as equestrians is that Horsey McHorseface is a three-year-old brown New Zealand-bred gelding racing in Australia for owners Joe Rosetti and Bjorn Baker; Baker also serves as the horse’s trainer. Under Keagan Latham, this son of Nadeem broke his maiden in his fourth career start in the $20,000 Lathan Arthur Thompson Memorial Maiden.

Horsey McHorseface is named in honor of the Boaty McBoatface snafu of 2016 — in case you aren’t familiar with that story, in a nutshell, the British government opened up a national poll to name a new polar research vessel. The winning name by thousands of votes was Boaty McBoatface, prime evidence that if you want people to take something seriously you never open up a national poll. The British government overrode the people’s voice, naming the vessel the Sir David Attenborough, but fortunately did opt to name a small sub-sea vessel on board the Boaty McBoatface.

Horsey McHorseface’s connections tossed around the equine equivalent as a bit of a joke and then decided to go for it… and the rest is history. Horsey McHorseface may not be destined to be the next great Australian star of the turf, but he’s certainly earned the informal title of “the people’s horse.”