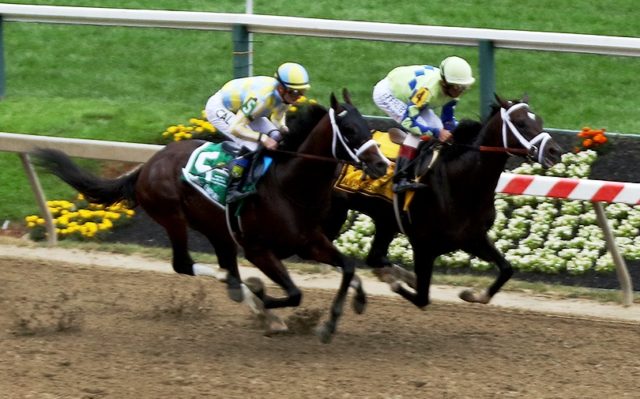 Just days before the Belmont Stakes and the classic race that should have been his to win, Classic Empire developed an abscess and had to scratch as announced earlier this morning. Who hasn’t been there?

We were sorry to hear about your abscess today. They are literally the worst, and they pretty much always pop up right before the biggest races of your life like a zit on your chin the day before junior prom, devised by the powers that be to 100% make you as miserable as possible.

Of course, you’re a tough cookie, and if it’s true what Mark Casse said that you were suddenly three-legged lame this morning, we believe you that it’s a bad one. After all, you ran an entire race with another abscess brewing in the same foot — your infamous Holy Bull performance in February. So you didn’t win. You finished third — that’s still in the money — with an abscess in your foot! We’d like to see Usain Bolt run with an infection in his foot and let us know how much it sucks.

Okay, and then the abscess gave you some back problems, and we totally get that, but you bounced back from that and you won a very gritty Arkansas Derby, and the racing world said “yep, here we go, here’s our future Derby winner all set to make his daddy proud like his older brother American Pharoah.”

We can only assume that the other colts were tired of hearing about your big brother and your famous daddy and decided to make a little example out of you. How else can you explain Irish War Cry side-checking McCraken who crashed right into you at the start and pretty much knocked you out of contention out of the gate?

But you’re a class act, Classic Empire, and you kept on fighting, working your way up through the field, before that dirty McCraken tried to bump you out again. You battled on all the way up to fourth while Always Dreaming took home all the honors and the praise of the racing world.

So what if you were nearly taken out twice? So what if you had so much mud in your eye that it basically swelled shut the next day, making it look like you had been in a bar fight in downtown Lousiville the night prior? (You would never do that. You’re an athlete and you treat yourself right.)

Nope, because you’re as gritty as you are talented, you bounced back from getting basically punched in the face repeatedly all the way around Churchill Downs. The Preakness was pretty much yours to win, and you put away Always Dreaming like you were shot out of a cannon, until that little upstart Cloud Computing dropped out of the sky and stole your thunder again.

This time it was going to be different. You were made of stronger stuff — while other horses skipped the Preakness, opted to sit out the Belmont, maybe came to New York totally fresh with no Triple Crown attempts at all, you decided you were going to go the distance, run in all three classics, remind the American people that even if you were down and out and had to fight for everything you had with no more chance at eternal glory with your name on that big special trophy, you were going to go for it anyway, run the race and do your best and show everyone what happens when you work hard.

Except you got an abscess.

An abscess! I mean, don’t get us wrong, we’re glad it’s something pretty minor, and we’d hate to see you pulled up with a career-ender or worse. But an abscess. It’s basically like a zit in your foot. It’s almost a little bit embarrassing, except that you’re a horse, and you had to remind the world that this is what horses do when the chips are down and it’s do or die time — they get abscesses. They patiently let us soak their feet and wrap them in diapers and duct tape and swear silently about the timing.

Hey buddy, it happens. And we’re glad to hear that you’ll be on the mend soon, and we can’t wait to see you back on form in the Haskell this summer.

Classic Empire, this one’s for you — you might be a star, but you’re just like one of our own horses. We all get abscesses.