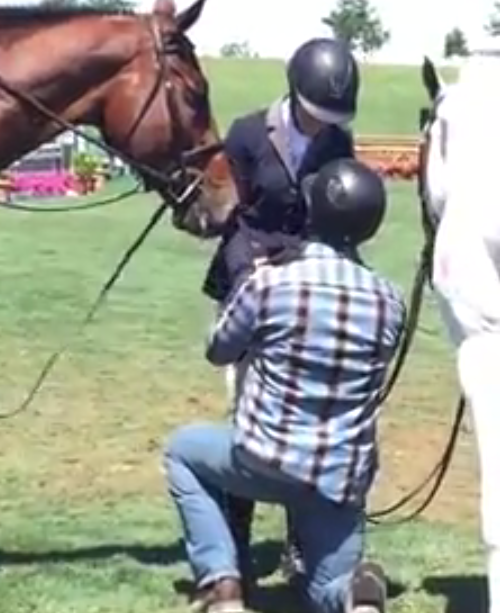 Get out your tissues.

Hey fellas, are you thinking of popping the big question to your equestrian girl? Well, you might want to take some tips from Matt Chilcote, who made a grand gesture this past weekend in Paso Robles, California.

Kim Laursen and Matt Chilcote were approaching their four year anniversary as a couple on June 5. As it happened, Kim was competing several horses in Paso Robles, California, over the weekend, which gave Matt a perfect opening to plan his big move.

“I had no idea he was going to propose!,” Kim said. “He had been planning it with some of my clients for a few weeks. They all kept an awesome secret — even my mom came down to ‘watch me ride’.”

There was indeed a lot of planning that went into this on Matt’s part, who from the beginning knew that he just wanted the moment to be one that Kim would cherish and remember forever.

“I had originally thought about this idea a couple years ago,” Matt said. “I had it in my head that she would compete in a class that was being spectated by a lot of people and family and friends. I would pop the question right after her round — assuming she didn’t tank the round, of course!”

Matt set about recruiting people to help him, all the while keeping it a secret from Kim. He eventually selected Paso Robles as an ideal setting for the proposal, as it had become somewhat of a sentimental destination for the couple throughout their relationship.

“At the time, I had actually planned on maybe doing it at a big team dinner and give a toast to Kim for her hard work and lead it into a proposal, but after a lot of thinking about it, I just wanted it to be more personal and special to her,” he continued. “I just kept thinking about how big of a deal the proposal is for a girl. I feel like they spend their whole life thinking about how it will happen so I just wanted to make it about her.”

Together with several clients and friends of Kim’s, along with the management staff at West Palms Events, Matt put his plan into motion while Kim was in the ring for a 3’6 Performance Hunter round on her client, Sarah Maples’, horse Ramzes. And, well, the rest is history:

For those of you wondering, Matt is not an avid rider. “I mean, I’ve done the horseback riding thing on vacation a few times,” he said. “A couple of times with my dad, and I’ve gone trail riding with Kim a few times. But I’m definitely an amateur compared to the people at these horse shows. I am currently working on my posting trot.”

Wearing a borrowed helmet and sitting astride Kim’s horse, Moon, Matt popped the ultimate question, and we don’t think there was a dry eye in the house.

“My first reaction was ‘What is he doing in the show ring?’ And then I read the side of the horse and figured it out. I didn’t know what to do, I totally froze and I had to ask him what to do, if I should get off my horse,” Kim said. “He was such a gentleman and so patient with my frozen state.”

“My favorite part of the whole thing is how personal it was between us,” Kim continued. “I never noticed how many people were watching. I don’t think he ever thought it would be this popular with other people, I know he really did it 100% for me and us and I love him so much for that. I am really blessed to have love like this in my life!”

Matt is quick to thank everyone who made this proposal possible, including Kim’s mother, Alicia, as well as close Friends Missy, Sydney, Lyndsey and Sara. And, he hasn’t lost sight of the most important part of this whole thing: “As special as it was and as much attention as it’s getting, it is and will always just have been about Kim. I just hope that I lived up to whatever her dreams and expectations were.”

What about when I told Matt that he’d definitely set the bar insanely high for the other poor guys out there? “I hope not, but if I did, Kim was worth it.”

We here at Horse Nation want to wish Matt and Kim the happiest of engagements! We’ll be waiting for our invite for the wedding.