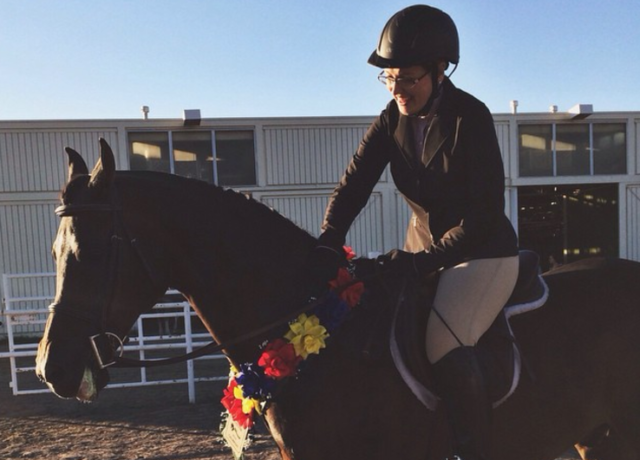 Some of our greatest moments in the saddle come when we least expect them. Lorraine Jackson recounts the ultimate catch ride and reflects on the gifts she received from a horse named Happy.

Throughout my junior and adult amateur riding career, I’ve always fallen comfortably into a certain economic slot – resources sufficient to pursue my expensive passion, but never enough resources to be competitive. I’ve never complained about this because I know that just being firmly in the American middle class means I make three times the global average wage. I have to do it on cheap horses and second-hand tack, but I get to enjoy the sport I love. You just have to get used to losing. A lot.

This is exactly where I found myself in the fall of 2014. I had a horse – an adopted BLM mustang – who was only four and even on her best day wasn’t going to turn a head in an under saddle class or out-stride a warmblood in the jumpers. But we got to do our thing most days, and that was great.

We’d been looking forward to the State Fair all year (they’re small dreams, but they’re mine), and naturally, the perfect hardy hooves of my sure-footed mustang picked that week to take after her dainty barnmates and blow an abscess. The barn owner consoled me that there were going to be a dozen horses from the barn at the show, and I could come and catch ride anything that had an open slot.

On Friday night I took my show clothes up just in case, and as I arrived, one of my barnmates was furiously leading a stunning, shiny, cresty bay arabian back to the barn from the warm-up ring, where they had apparently had a disagreement that was sufficient enough to convince her to scratch.

I couldn’t take my eyes off him. His long dishy face and delicate legs were the stuff of Arab fairytales – A Godolphin lookalike who snorted and stared past me like he was looking into a desert expanse a thousand miles away.

The horse was fairly new to our barn, and the barn owner suggested he might just need a quick lunge, but the woman had already moved on. He looked at me staring like a kid in a candy shop and asked, “Do you want to ride him?”

In the next few minutes, “Happy” was lunged as I rapidly changed into my show clothes, pinned on a number, and met the horse at the mounting block. His new owners, Erin and Ben Blackwelder, who had bought the horse for their young daughter Ellie looked on with complete trust and support as I threw my leg over a horse worth more than my car. “You’re going to love him!” they assured me. Ellie, too, looked on kindly from the edge of the ring as her Prince Charming packed me around.

I stared down the powerful, muscular neck and crisply pricked ears, in complete disbelief that I was on this animal. He moved off with grace and power beyond any experience I’ve ever had, and from warm-up to dismount, I couldn’t wipe the grin off my face.

I had just two or three minutes with him before we were called to the ring for the class, but it didn’t matter: no warmup could prepare me for what came next. As we trotted into the illuminated night ring, Happy puffed up and stepped out even more than before, keenly aware of the job before him. He marched on with expression and purpose at every gait – a perfect combination of the consummate professional and emotive, graceful performer.

I was ecstatic but still a little nervous early on, but I completely forgot I was being judged as they asked for the hand gallop, and I leaned forward into two-point and felt the late summer air whip across my face as Happy charged the ground like a Bedouin warrior. He had transported me to that distant desert and evaporated every adult angst swirling in my head. I was just a girl galloping with a spectacular animal.

When they finally called us into the center for pinning, I reluctantly brought him to a halt and then realized I had no idea what my horse’s show name was or what number was on my back. I only knew we’d won by the gleeful reaction of the Blackwelder family at the rail when they announced “Cytes of Summer” in first place. Even though I knew the horse was otherworldly, I was still in shock. They pinned the blue ribbon on his bridle and I took the first victory gallop of my entire riding career.

The Blackwelders kindly offered to let me ride him in the championship the next night, as well, and despite my nerves at letting down this incredibly generous family, I stayed out of Happy’s way and he won the championship with me aboard. I was in complete awe as they draped the tricolored rosettes around his perfect neck and we took another exhilarating gallop together under the lights of the electric fairgrounds. To anyone else in the world it was just another ribbon at the State Fair, but to me, it was a poor scrappy horsewoman’s dream come true.

At just 12 years old, Ellie proved to be wise and generous beyond her years, and insisted that I keep the ribbon and rosettes I won with Happy. These treasures now hang above the desk I sit at – tokens which became even more precious this week as Happy was laid to rest after a swift and brutal fight with soundness issues this spring. For all the many joyous rides Happy gave to others, Ellie made the selfless decision to give Happy the one true gift we can give in return – a dignified ending.

I feel beyond lucky to have been the recipient of one family’s generosity, and also Happy’s full and willing soul. A more aptly named horse has never lived, for he truly embodied and manifested the purest form of Happy.  Thank you, Happy, for being the catch ride of my life.

Many Thanks to Erin, Ben, Ellie and Brooke for your generosity through the years, and for allowing me to share this story here. Thanks also to Rebecca Tolman at Impulsion Images Photography for sharing her work.