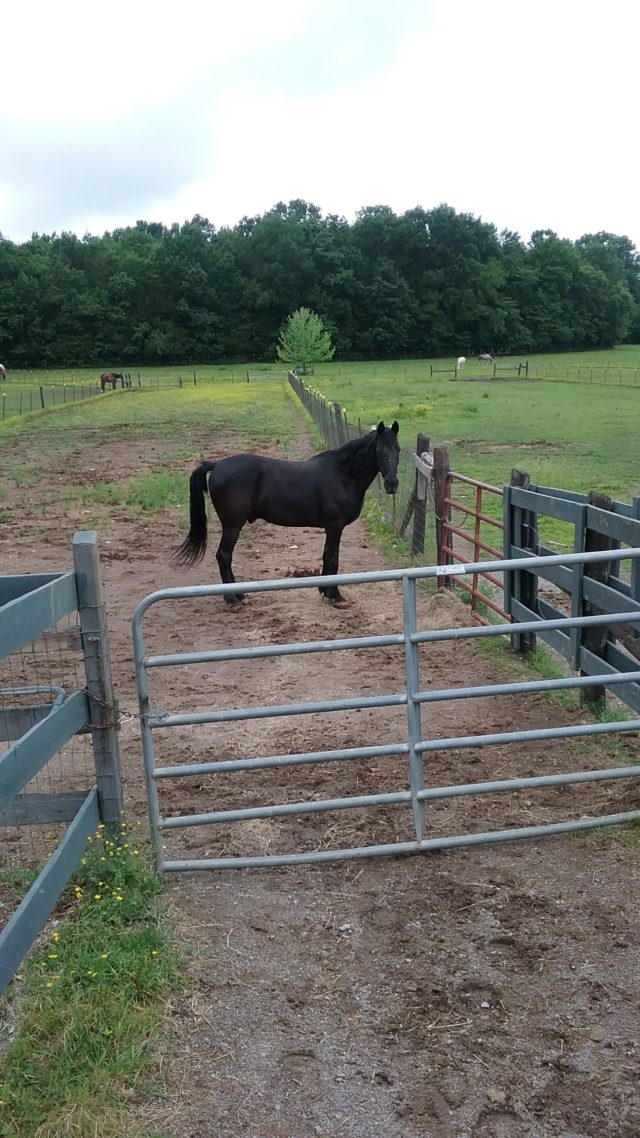 Great news for Theo: he got his first pasture turnout.

“What am I doing out here?” Photo by Candace Wade.

New to Theo’s story? Catch up by clicking the #SAVING THEO hashtag at the top of this page.

No nauseatingly demeaning horse wearing a mortarboard and tassel for Theo.  We mark the occasion of Theo, the rehabilitating ex-big lick Tennessee Walking Horse, moving out to a “big boy” pasture with a joyous heart and a wary sigh of relief.

“Theo Red Letter Day” was the header for the e-mail I received from Ed (Theo’s rescue/rehabber) on Sunday. A hope-charged paragraph followed:  “Theo faces the future on his first ever day out in a big paddock. He’s been staying pretty close to the gate for security, but he’s looking out at the rest of the horses with interest, now that he can put his nose over and nuzzle if he has a mind to do so. Thought you’d want to know; it’s been a long time coming.”

Big-wow for normal horse, right? For over 18 months, Theo has endured the day to day danger of never having his hoof heal and/or having the inside of his head heal enough to challenge the world outside his little paddock. Ed’s news was joyous to hear.
I was full of questions for Ed. Here’s the scoop:

Why this weekend? “We’ve been mulling over getting him out of the small triangular lot. The shoe seemed to be holding and I thought that if he took off like a Formula 1 when he had more space that he wouldn’t tear up his foot as he had before (author’s note: when it drizzled on him, for heaven’s sake!). The ground was firm. It was overcast so if he got rambunctious, he wouldn’t over heat. Sometimes you just have to say… ‘OK, let’s do this.'”

What went through your mind? “I was concerned that Theo would rear up and jam his foot in the fence if either of the two horses on the other side of the fence picked at him. Fortunately, neither one of them seemed to give a hoot that he was out there. And, Theo gave no indication of having any interest in interacting with any of them either. This is not an uncommon reaction for a horse that has spent so much time, since he was about 16 months old, confined to a stall.”

Any prep? “We took a deep breath; made sure he had a big pile of hay in the corner of the paddock; walked him in and turned him loose.”

How did he respond? “He stood for a moment, kind of smelling the wind, walked about a dozen steps, turned to the hay and commenced to chomp. He never ventured more than about 15 feet from the gate and from sight of the barn entrance. Again, this is not uncommon for horses that have been totally confined. He didn’t flip his tail in the air and run off. He’s going to have to feel a lot more confident about being out then he does at present.”

What else did you notice? “Every time Theo saw a person come close to the gate, he’d come over for attention. Any time a horse came close to the separating fences on either side, he’d scoot away from the fence so that he wasn’t within ‘reach out and touch someone’ distance. He also doesn’t like it when flies touch his sacred body. The great outdoors has a lot more bug potential than he’s used to in his box stall with the fans going, or the small paddock where he spent short turns out. The time he spent in the great outdoors in the large paddock was the longest time he has spent outside in over a year and a half.

How did he respond when it was time to come in? Happy to put his head in the halter and walked right back in. Perfect manners.

I asked if there was anything else. “A big sigh of relief. This trial went so well. At some point Theo is going to discover that his legs are meant for running and that he can take a chomp out of the rude boys across the way, but hopefully by the time that happens, he will have been out in the open long enough that he will be less exuberant. The farrier comes this week to work on Theo’s feet again. All his shoe nails will be tight and ready should Theo decide to launch himself airborne or move out Preakness style.”

“It’s a big world out there.” Photo by Candace Wade.

Ed added an experience-nugget from a previous ex-big lick rescue/rehab: “I was reminded about the two plus years that it took to actually get this other TWH comfortable with being outside and being part of a herd after years of confinement in a stall as a ‘show horse.’ Now he doesn’t want to come in and can’t wait to go out. He is so much healthier in his mind as well as in his body. That’s our goal for Theo.”

Yeah Theo! Congratulations to Ed and his team. Stay tuned for Theo’s college courses in “How to Be a Balanced Horse.”