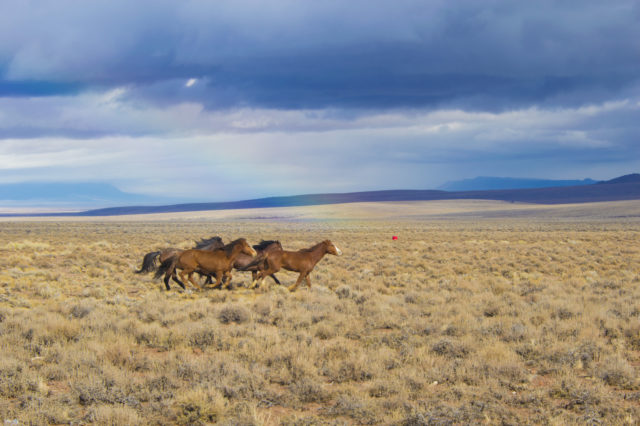 President Trump’s 2018 budget proposal calls for a 9.2% reduction in spending for the Department of the Interior, which includes the Bureau of Land Management or BLM — this is the federal agency charged with overseeing and protecting the nation’s wild horse and burro population.

Traditionally, the BLM has managed the nation’s wild horse and burro population by setting management levels for herd management areas, and then conducting roundups to remove what it deems to be excess wild horses from areas when necessary. Gathered horses are available to the public for adoption, with unadopted animals living in long-term holding. Tens of thousands of horses have accumulated in long-term holding at the expense of the taxpayer.

The Bureau of Land Management has come under criticism for this method of so-called population control, with advocacy groups suggesting everything from birth control vaccination administered by dart (the PZP vaccine) to allowing nature to take its course and stopping gathers and any population control altogether. While advocates may not agree about the best course of action to take to manage wild horse numbers — or if management is even necessary — most agree that the BLM has not done the wild horse any favors with its current plan.

The BLM’s 2018 budget justification, which can be viewed by clicking here, calls for a $10 million reduction in spending in the Wild Horse and Burro (WHB) Program, describing the current situation as follows:

The consistent growth in annual costs for the program is unsustainable and constrains the Bureau’s ability to effectively address competing uses of public lands, as the number of animals on the range and BLM holding facilities grows.

The majority of the WHB Program’s budget has gone towards maintaining the tens of thousands of horses in holding facilities while numbers of horses on the range still continues to rise according to estimates, demonstrating clearly that the model of gathering horses and removing them from the range is not a sustainable long-term solution. To reduce this spending, the BLM suggests the following:

As such, the budget proposes to give BLM the tools it needs to manage this program in a more cost-effective manner, including the ability to conduct sales without limitations.

A BLM press release went even further, stating explicitly that this budget would allow for the humane euthanasia and unrestricted sale of “excess animals.”

The budget justification addresses advocate-supported methods of population control such as the PZP vaccine as well:

The remainder of the funding decrease will be achieved by reducing gathers, reducing birth control treatments, and other activities deemed inconsistent with prudent management of the program.

One can only imagine how the BLM seeks to both reduce the need for gathers and reduce the number of wild horses on the range.

How can you affect change?

If you are opposed to this budget plan for fiscal year 2018 for its dramatic proposed changes to the Wild Horse and Burro Program, we urge you to contact your representatives in Congress and explain to them why. There are numerous online petitions in circulation, but the most effective and meaningful way to affect real change is to speak with your lawmakers and make your opinion known. If you need assistance finding your representation in Congress, you can find your representatives here and your senators here.