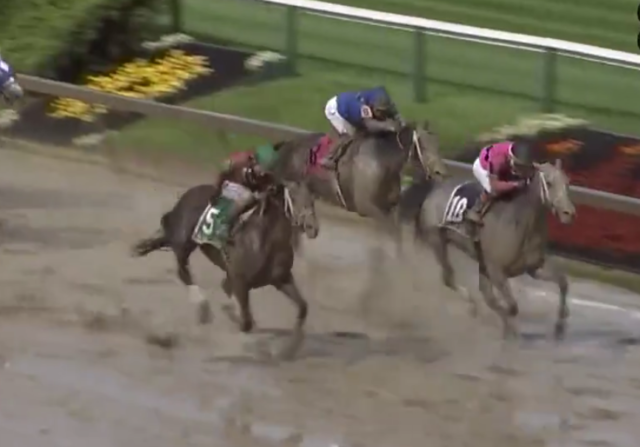 While the main spotlight may have been on Cloud Computing for Saturday’s Preakness Stakes, it was a filly day on Friday: long shot Actress scored an exciting win in the Grade 2 Black-Eyed Susan.

A quick opening pace that completely fell apart in the homestretch set up a perfect scenario for late-closing fillies in Friday’s Grade 2 Black-Eyed Susan, the traditional filly race the day before the Preakness Stakes at Pimlico of Baltimore, Maryland. The mile and a sixteenth was run on a sloppy track thanks to the early arrival of a torrential downpour; the rain, however, failed to dampen the spirits of a record Black-Eyed Susan Day crowd.

Initially led by Tapa Tapa Tapa, Full House and Moana racing three-wide, Shimmering Aspen cruised along the inside and eventually came to challenge Tapa Tapa Tapa who had taken command of the lead. Coming out of the turn for home, jockey Nik Juarez aboard long shot and maiden late closer Actress saw a space between the leaders and made a move, only to get shut down which forced him to check the filly back.

As the leaders folded and the pace crumbled, Actress and Juarez dug in deep and somehow accelerated yet again, even after a check, to power past the folding pack, repel a challenge by Lights of Medina and cruise home in the mud to victory.

What a way to break your maiden in only your third career start! Actress is trained by Jason Servis and owned by Gary and Mary West, a homebred by Tapit.

The Black-Eyed Susan is informally considered the second jewel of the Triple Tiara, though no formal such arrangement actually exists. Generally, the filly equivalents to the three Triple Crown races — the Kentucky Oaks, the Black-Eyed Susan and the Acorn Stakes of Belmont Park — are informally called the Triple Tiara. The Coaching Club American Oaks has also been in play in the configuration for the Tiara, and New York state has set up a more formal Tiara series consisting of the Acorn Stakes, American Oaks and the Alabama Stakes.