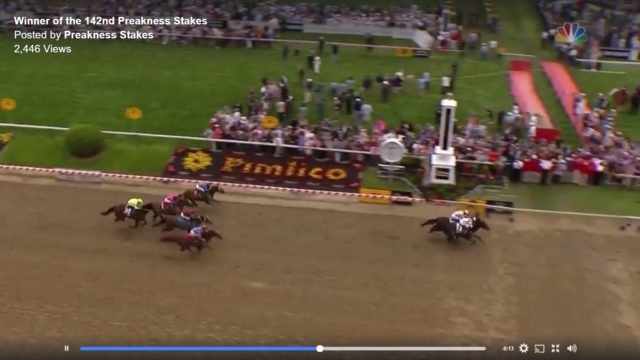 It came down to a shocking head-to-head finish, but with Always Dreaming nowhere to be found.

Fans, analysts, handicappers, and commentators were all shy to pick anyone outside of 7-5 favorite Derby winner Always Dreaming or 2-1 colt Classic Empire, which was the perfect setup for a stunned crowd when Classic Computing took the race by a nose despite the 13-1 odds against him.

Jockey Javier Castellano offered up a beautiful ride on a sunny Saturday in Baltimore, keeping Cloud Computing just off the rather slow pace set early on by favorites Classic Empire and Always Dreaming, who went nose to nose with each other for the first 3/4 of the race.

Always Dreaming and Classic Empire stayed ahead and nose by nose into the far turn, at which point the Derby winner started to fade, and no amount of pressure from jockey John Velasquez could keep him in the hunt for the draping of Black-Eyed-Susans and the colt would ultimately finish in eighth.

Classic Empire appeared as if he would hold off pressure from any number of strong finishers, including major pushes from Senior Investment (a 30-1 long-shot who ultimately finished third) and Conquest Mo’ Money who pushed hard after the turn but shuffled into seventh at the finish pole, but it was Classic Computing who found the perfect easy pocket to leap forward and rival Classic Empire’s speed.

The two did the final furlong in a dead heat, with Cloud Computing only pulling ahead in the last four strides of the race.

The Preakness Winner is trained by Chad Brown, and owned by Klaravich Stables, Inc. & William Lawrence.

Cloud Computing was not raced as a two-year-old, and in his three starts only won his maiden debut in February. He was second in the Gotham Stakes and third in the Wood Memorial.

Immediately following the race, his trainer Chad Brown was asked if they plan to run Cloud Computing in the Belmont, and he was non-committal. “We’re going to enjoy this one first and then make some decisions. It’s a ‘maybe.'”