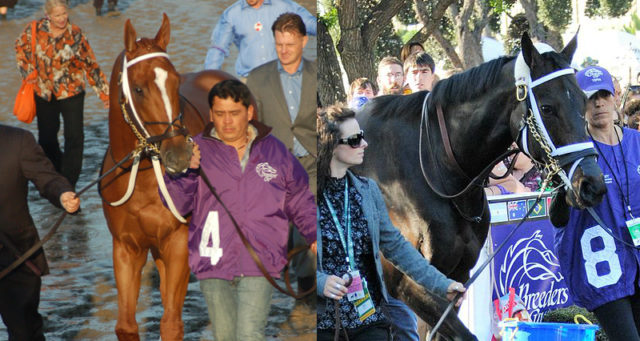 Connections of the “Queen of the Turf” reported yesterday that champion Tepin is in foal to Curlin for a 2018 baby.

Despite initial news in mid-April that Tepin would not be bred this year immediately after a springtime retirement, the stars aligned and the champion turf mare’s connections announced yesterday that she is confirmed in foal to Curlin.

With such a narrow window of opportunity when the mare came into heat the end of April — owner Bob Masterson stated that he would not have attempted a breeding any later — plans were rapidly made and Tepin headed to Hill ‘n’ Dale for a date with Curlin, a Breeders’ Cup champion in his own right and sire of Grade I winners.

Fortunately, luck was on this pair’s side, and Tepin was in foal on a single cover. She will stay at Hill ‘n’ Dale for the foreseeable future. The mare was checked on Monday and rechecked on Wednesday to confirm that she is in foal.

Tepin retired with 13 wins to her name on two continents and two Eclipse Awards, with many of her wins coming on turf against males. She earned over $4 million in her racing career. Curlin earned over $10 million and until 2016 was the highest-earning North American money earner; he won such races as the Preakness Stakes, Breeders’ Cup Classic and the Dubai World Cup.

Best of luck to Tepin, and we can’t wait to see what this combination produces.

[Tepin in Foal to Curlin]