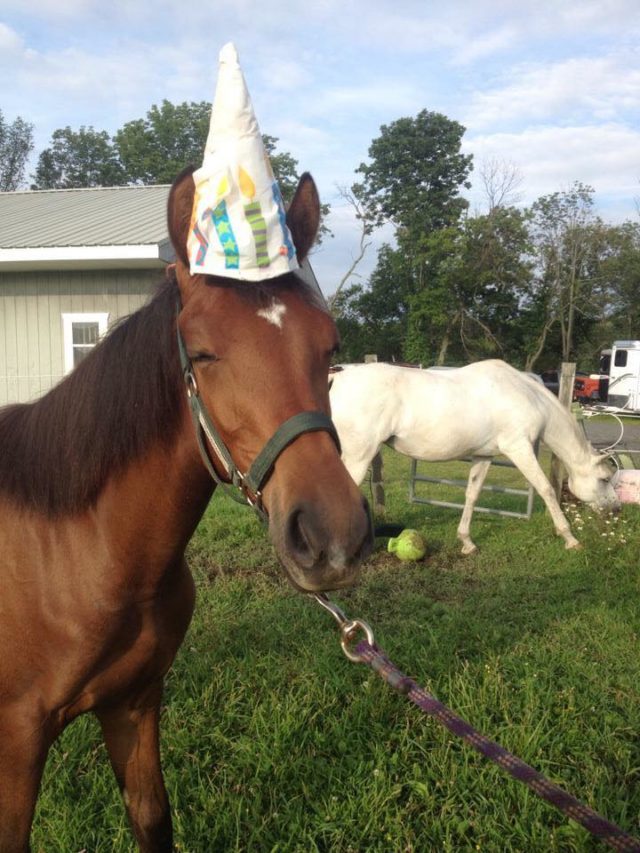 It’s their birthday and they’ll party if they want to.

Ranking fairly high on the list of things equestrians do that confuse “normal” people is celebrating your horse’s milestones: birthdays, anniversaries, “hooray, you didn’t buck me off today” parties… the occasions to celebrate are varied, but fortunately our readers photo-documented along the way for this week’s challenge!

With a party, of course! Photo by Emily Tibbs.

I snapped this photo of my boy Oliver on his 15th birthday. Turns out he’s not a fan of carrot cake. Photo by Margaret Wilson.

Last year, 6/6 on Coach’s 18th Birthday. I think my pic speaks for itself and how he feels about the hat. Photo by Victoria Tunis.

When I was still boarding, we would celebrate my horse Scooter’s birthday with the lesson kids. There were decorations, handmade birthday cards, and games like apple bobbing! All photos were taken by Anita Kennedy.

He OBVIOUSLY gets a carrot cake!!! Photo by Jessica Troup

Cowboys 5th Birthday. He has to stick his nose in everything. Photo by Hailey Longstreth.

he gets a sash, usually a crown, and an extra scoop of grain. he refuses to try homemade treats(cake, etc) he turned 22 this year.
Photo by Nina Amelung.

This is Tory’s signature pose. Top photo was taken at 1 hour old and the second one on her first birthday last year. Both photos by Sharon Lambert Coombe.

We celebrate with cake! My quarter horse and event pony loved the blue icing. Photo by Phyllis Myers

I took this one of my girl Maple when she turned 23 this year! She was born on March 29, the same day as Man O’ War, who she is related to on both sides 😀 I made cookies for all of the 33 equines at our barn, and left a bag of her favorite treats on her door so that people could spoil her throughout the day. Photo by Kylie Pierce.

n addition to baking him a “horse cookie” cake with his age written in peppermints, Roger Rabbit “celebrates” his Jan. 1 OTTB birthday by modeling fashionable costumes. Below is a montage from his most recent looks: 25th B-day – The Monopoly Man; 26th B-day – Viking Warrior; 27th B-day had two Dr. Seuss themed outfits – “Thing 27” and The Rabbit (Cat) in the Hat; and this year’s 28th birthday celebration in which he was transformed into his cartoon namesake, Roger Rabbit (and I joined him as an awkward Jessica Rabbit). All photos by me, Yvette Seger, except the 28th birthday ones, which are courtesy of Mike Cook.

Throwback to Penny's first birthday I celebrated with her. She shook her head a second after the first photo. ? #horsenation #chestnutmare #happybirthday

My birthday boys R Pair A Dice the AWB and Colin the OTTB. #horsenation