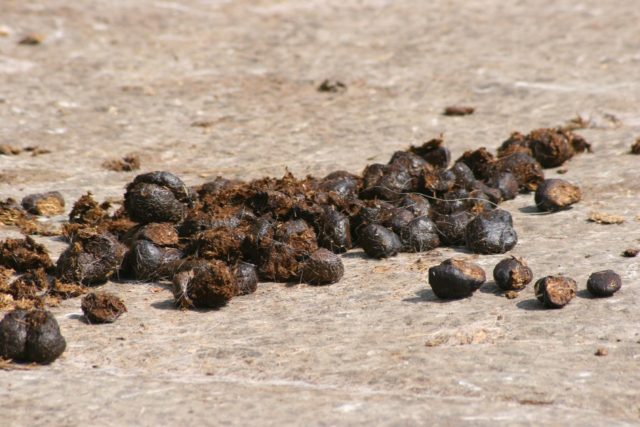 We know, we know, we’re preaching to the choir… but as it turns out, you COULD eat off the barn floor, just like you always told Mom. (Not that we actually recommend that.)

In many parts of the country, recreational trail riders are sharing their spaces with bicyclists, hikers or even just dog walkers out taking the air. In suburban southeastern Pennsylvania where I grew up, some of the most popular trail riding areas are designated multi-use trails — and while the vast majority of trail users, from the serious mountain bikers to the casual day users strolling the nice graded paths, are pleasant and happy to share with horses, a few take objection. Specifically, they seem to take objection to the manure that they leave behind. Family and friends out on a ride have been shouted at by strangers that if they (the stranger) need to clean up after their dog, they (the riders) need to clean up after their horses as well, and that the horse manure is equally a public health hazard.

Dog waste does pose a significant threat to human health because it can carry pathogens that can affect humans, some of which are antibiotic-resistant (see Environmental Contamination by Dog’s Faeces: A Public Health Problem? for more details). But does horse manure carry the same threat?

Adda Quinn is a founding member of Envirohorse, an organization devoted to research-based information on horses, horse trails and related public issues, supporting the continued equestrian use of both public and private lands. Quinn prepared an excellent, well-researched paper on horse manure and its risks to human health, first published in 1998; this paper provided the foundation for this article.

The chemical makeup of horse manure classifies it as a solid waste — that is, manure does not contain significant amounts of hazardous components nor does is exhibit hazardous properties. The chemicals in horse manure are not considered toxic — in fact, they can have many beneficial properties in agriculture, which is why horse manure has been and still is used as fertilizer both on an industrial scale and by home gardeners.

Generally speaking, most farm-generated animal wastes provide little risk for carrying human pathogens. Horses in particular do not significantly carry in their guts C. parvum or giardia, which are recognized as the greatest human health concern in contaminated water; these diseases can also be passed through oral-fecal exposure. “Significant” presence of C. parvum or giardia would be concentrations high enough to transmit to humans; tested samples of adult horses on a California trail system did indicate a low prevalence but not enough to make anyone sick.

E. coli exists in several strains specific to the individual species; the equine strain does not cause intestinal disease. Adult horse guts have been found to contain insignificant amounts of E. coli (as well as salmonella) and after 24 hours, E. coli did not exist in manure.

So is it safe?

Quinn refers to a few equestrian-world examples of exposure to manure to help illustrate that horse manure is not a toxic waste: anyone who has ever seen a veterinarian armpit-deep in a horse’s rectum and the veterinarians themselves can attest to the fact that one doesn’t get sick from contact with manure. The multitudes of horsepeople that spend plenty of hours mucking stalls and cleaning pastures can also back up this point.

Some of the perception that horse manure is a risk to human health comes from a lack of contact by the general public with horses. An aversion to animal waste is a natural response, and we’re not suggesting that everyone go roll around in the manure pile and then go eat lunch without washing up — but “normal” contact with horse manure is probably not going to get you sick.

Due to insignificant levels of the waterborne pathogens C. parvum or Giardia and bacteria E. coli or salmonella, as well as the lack of toxic chemicals found in horse manure, combined with the lack of evidence of disease from the equestrian population who regularly handles manure, we can rest assured that horse manure does not pose a risk to human health.

To read Quinn’s paper in full, click here to see the PDF.