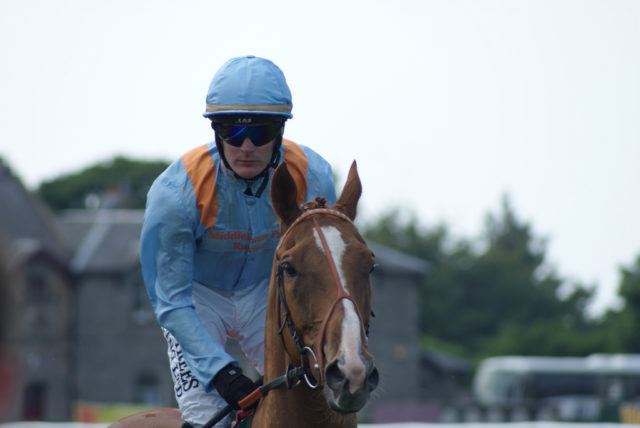 With the Preakness Stakes just days away, the pressure is most certainly on: we spoke with Kristen Dieffenbach of the Association for Applied Sport Psychology to learn about how sport psychology can help jockeys (and all equestrians).

Sport psychology is increasingly gaining mainstream respect as a critical aspect of an athlete’s preparation for performance. In the building anticipation for Saturday’s Preakness Stakes, we spoke with Kristen Dieffenbach, an executive director of the Association for Applied Sport Psychology and a certified consultant, to learn more about sport psychology can help jockeys (and all riders!) deal with high pressure.

HN: So we’re just days away from the Preakness Stakes, and the pressure is definitely on. The horses are definitely in the spotlight, but the jockeys are athletes themselves — what kind of pressures are they facing?

KD: That’s definitely correct to call the jockeys athletes — often in sports such as horse racing or riding, or even auto racing, where the horse or the car is putting in what looks like most of the physical exertion, people will forget about the jockey or the driver as an athlete. They’re as much an athlete as a quarterback or a pitcher, with that same need to physically execute a skill. Jockeys are physical performers plus the unique element of performing with a living partner as a team, but one that doesn’t speak the language!

KD: At an elite level, it’s unlikely that these jockeys would be successful if they hadn’t developed certain sport psychology skills along the way. There’s always an ego blow when someone doesn’t perform, plus a certain fear factor — we see this as well with mountain and road bicyclists, that fear of falling. The best performers have likely practiced certain mental skills to put themselves in the right place prior to a race — that’s not to say that there aren’t still jockeys in the field who are still developing these skills, but it’s likely that the elite jockeys are able to be prepared.

HN: While I’m sure that these skills have been around for awhile, it does seem from an equestrian’s perspective that sport psychology is becoming more and more a focus in all horse sports, but especially in racing. Is that true?

KD: In certain respects, yes. Sport psychology has really been around since the early 1900s within the psychology field, but it wasn’t until the 1980s that it became a formalized profession. It’s now often blended with exercise science, looking at the athlete as a whole. 30 years later, it’s still a young profession in some regards — more people are aware of it and talk about it; I don’t have to explain what it is that I do as often!

There is still a certain lingering stigma that’s slowly being erased — the concept that there “has to be a problem” in order to apply psychology. We’re spreading the message that just like sports nutrition, athletic training and so on, if we invest the time in sport psychology now with athletes it will help enhance performance down the road.

There’s a performance shift with athletes towards working proactively — these trends develop over the years as we learn more, but we are starting to recognize that the body includes the mind and the mind includes the body. There’s more money involved in athletics and the pressures are more intense, and the sport psychologist is now often one person in the entourage of a professional athlete.

Jockeys remind me of long-distance runners in many ways: they’re intense people, they’re very driven, they’re passionate, and riding is a whole-life experience and very consuming. Sport psychology is about taking that Type A driven personality and harnessing it in a positive way to benefit the jockey’s performance.

HN: This may start to enter the realm of speculation to a certain extent, but what are some strategies that jockeys might be doing in the locker room before a big race like Saturday’s Preakness?

KD: Many jockeys on race day will likely be trying to do things the way they always do it — eat the same things, stretch the same way, do the same things at the same time. You don’t get to a big race and radically change every thing you’ve ever done — you’re going to do what you’ve trained to do, really well. Unlike something like a soccer match, where the game is going to change and transform as it goes, the race is the same — the distance is the same, the shape of the track is the same. From what we see with the elite jockeys, there is some acknowledgement that the race is a big deal but the routine should be the same. They’re taking care of business.

On the other hand, some jockeys may find they need to change the routine in order to protect themselves. They might be under much more public scrutiny, they might be followed by the media — they may need to change their routine to find the time they need in order to not expend their energy on all of this extra “stuff.” A race-day jockey may be “self-ish” — not necessarily needy, just taking the time they need for themselves.

The elite athletes are aware of the controllables — what do I have control over, how do I control those things, and how do I minimize the distractions of things I can’t control?

HN: That really sounds like a good example for all horseback riders.

KD: It is! Let go of what you can’t control and have no impact over. Top level athletes in any sport who are consistent at that level have developed these skills and an awareness of them. A lot of younger athletes can learn from this example!

HN: This is also good advice for coaches of riders too.

KD: A coach is very good at acting in the moment like this with the athlete they have. A sport psychologist will build those skills ahead of time so that the uncontrolled isn’t as much of a problem.

Elite athletes, such as jockeys, are working on these skills in the years and weeks leading up to a big moment — they’re not trying to learn all of this a few days before a big race. They need to have built the skills and practiced them in less intense situations until they’re ready to go.

HN: Thank you, Kristen, for your time!

We’ll bring you plenty of Preakness coverage in the days and moments leading up to the race, so keep it locked on Horse Nation this week. Go riding!