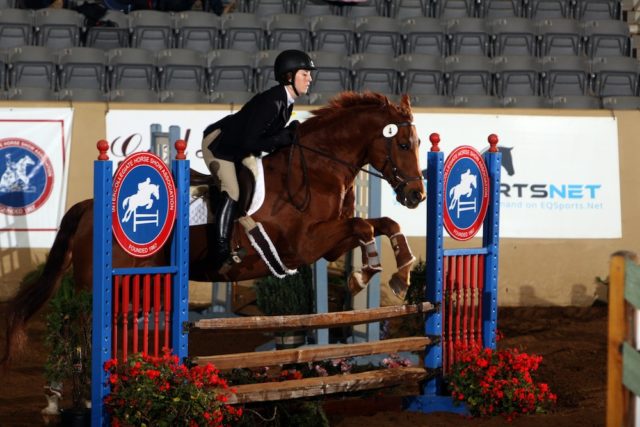 2017 was a benchmark year for the Intercollegiate Horse Shows Association as it celebrated its 50th anniversary. Here are details on the major winners at this year’s National Championships.

Lexington, KY (May 12, 2017) “Alone we are a whisper but together we are a cyclone,” said Katherine Steiner after a brilliant series of rides led to crowning the Centenary University Equine Studies major – in her first trip to Nationals — the USEF Cacchione Cup titlist for 2017 during the Intercollegiate Horse Shows Association (IHSA) National Championships, May 3-7, at the Kentucky Horse Park in Lexington.

Under the keen observance of hunt seat judges Linda Andrisani and Stephen Wall, and in front of USEF president Murray Kessler, Steiner topped a field of 38 qualifiers from across 8 IHSA Zones competing on the flat and on Johnson & Wales University alum Tom Hern’s over fences courses.

“This is one of the best arenas to work in,” said Hern, referring to the indoor Alltech stadium. “Since intercollegiate riding is based on the draw, I built courses that incorporated options and encouraged horses and riders to keep striding straight and forward.”

“Solid, safe choices are their own reward,” said Wall, who was judging Nationals for the first time but had competed as a rider in the 1970s. “I’ve been impressed by the high quality horses and level of riding. This show lives up to its billing. Linda and I enjoy seeing how kids from all over have qualified and won.”

Andrisani, who last judged in 2006 when Sarah Willeman (Stanford) won the Cacchione Cup said, “You can’t lose perspective that these are riders just getting to know their horse.” Good scores come from “nice style combined with good choices.”

“My goal,” said Henry, “was to make the top three.” The Entrepreneurial Business Management major said her inspiration comes from the number one ranked show jumper in the world, Kent Farrington. “The horses were amazing. Riding flat isn’t my strong suit so my coach and I worked hard on dropping stirrups and trotting fences. I watch a lot of Kent videos. My friends call it my ‘Farrington effect.’”

“This was Katie’s first Nationals and last show,” said Centenary coach Michael Dowling about the graduating senior. “It’s a Cinderella story. She invested herself all year for this one moment and was the most driven and dedicated of riders.”

“Going last in the work-off was nerve-wracking,” said Steiner, who joined the program as a freshman Intermediate rider. “It was the best and worst place to be. I drew a horse I knew could pull a rider over the pommel if you let him, so I wanted to deliver a calm, cool and accurate ride.” And cool she was, despite riding with taped ribs that Steiner, who lives with asthma, bruised in an allergic coughing fit the night before. After graduation she plans to move to California and continue competing.

An EquestrianCoach.com Achievement of Excellence Award went to Claudia Freeman (Rochester Institute of Technology), who clinched an individual national championship on the first morning of competition in Open Equitation Over Fences. Freeman gets a six-day apprenticeship and $500 stipend with 2005 COTH Show Hunter Horseman of the Year, Stacia Klein Madden, of Beacon Hill Stables.

Focus was the key to the SCAD Bees and hunt seat coach Ashley Henry’s third consecutive Collegiate Cup. “We tried not to think about it and practiced like we’d never won it before. My riders are amazing. It took everybody to make this happen.” Including a 90-point winning score in Open Equitation Over Fences (Team) for Tatum Tatreau on the “handy” 16.3 grey, James (Centenary).

SCAD co-captains, Mariel Cooper and Meredith Denny, (known as ‘the M&Ms’) were also proud. Cooper, a senior heading to law school, “couldn’t be more ecstatic,” to have won a third title, and Denny, a sophomore, called it “icing on our cake.”

Proving they would have their cake and eat it too were coach Carla Wennberg and the St. Andrews University (SAU) Knights, sole winners of the American Quarter Horse Association (AQHA) Trophy for high point western team, having shared last year’s title with Berry College in one of only five such ties since IHSA began recognizing high point western teams in 1979.

“It felt nice to pull ahead. It came down to the last class,” said Wennberg. “We needed a win in Open (Western Horsemanship – AQHA Trophy) by Mark (Mowbray). If Black Hawk’s Kinsey Ayres (who finished second) had won it would have led to a tie (between teams SAU and Black Hawk College). We needed an Open win if we were going to win the team trophy.” The 2008 AQHA Horseman of the Year and 2012 IHSA Sportsmanship Coach of the Year concluded, “This team truly works together. That’s why we did it. You’ve got to help each other win.”

The AQHA Trophy reserve high point team was Black Hawk College, coached by Donna Irvin and capping a 26-year career as coach and professor of equine studies at BHC for the AQHA Professional Horseman and barrel racing clinician. “They never gave up,” she said. “This is one of the hardest working student teams I know. We’ve been third three times. This is our first reserve national title.” Under Irvin, the two-year college has qualified teams for the Nationals every year since 2002.

Another two-year program that wrote its first historic chapter this year was Northeastern Oklahoma A&M University, which produced 2017 AQHA Trophy High Point Rider, Britney Abernathy. The sophomore Agricultural Business major said, “I felt like I had a chance after I won my western horsemanship (AQHA Trophy – Rail Phase A). I didn’t expect as high a score in reining but I’m thrilled! I couldn’t be on this journey without my coaches. They brought me all this way.

“This is huge for our four-year-old program,” said NOAMU coach, Amanda Boroughs. “She’s our first national champion. I’m so proud. Last year Britney just missed advancing to finals. That’s when she said she would ‘not let that happen again.’ Next year, she told me, we were going ‘all the way.’”

Also making her first trip to Nationals was AQHA Trophy reserve champion Hayley Ruffner, 19, (Alfred University). “I’m beyond excited. I drew Danny Boy for my reining pattern and he was perfect. Good broke and gave his all. I just listened to my coach, who says ride to win don’t ride to not get beat.”

For Kristen Wesoja, 22, her inaugural trip to Nationals was the slide of the Cazenovia College student’s life. She rode “honest” Luke, provided by University of Findlay, to an NRHA Lawson Bronze in the NRHA Open Reining Pattern championship: “My horse was amazing. I couldn’t have done it without him. This was a great experience, especially getting the feel of different horses.”

“This is a show that brings good horses and good riders together,” said AQHA World and Congress judge, Mike Carter, who joined Deborah Kail (who has produced more AQHA Youth Champions than any other Quarter Horse showman) in judging IHSA western horsemanship and reining classes.

“This is the fourth time I’ve judged Nationals,” said Kail, who first did so in 1996 at the Los Angeles Equestrian Center. “IHSA continues to advance. Its horses and riders get more talented every year.”

“Fifty years is not that long a time but when it comes to college riding and the opportunities it has offered in conjunction with the impact it has played on student lives, then half a century of intercollegiate horse shows has made a world of difference,” said founder and executive director, Robert E. ‘Bob’ Cacchione.  “It was my love for the horse that drove the vision of providing riders, regardless of skill or finances, to compete on animals with such big hearts. I am humbled when I step back and think of what these amazing partners have provided IHSA for generations.”

The 2018 IHSA National Championships will be May 3-6 in Harrisburg, PA. For complete results and news see www.IHSAinc.com.