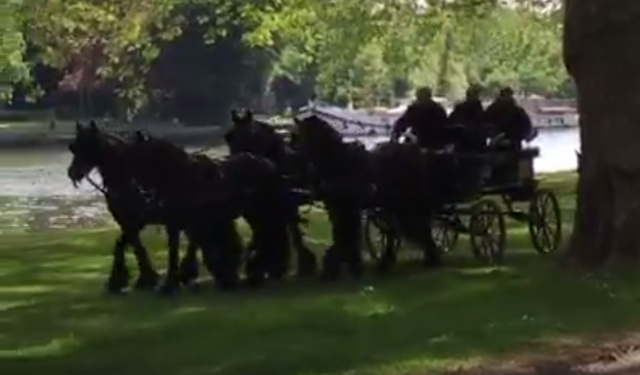 England’s Prince Philip recently formally retired from royal duties — but that doesn’t stop him from supporting the equestrian sport he loves.

Royal Windsor Horse Show traditionally attracts a competitive set of combined drivers from all over the world, ongoing right now in Great Britain. Instrumental in the development of combined driving as an international sport was Prince Philip, the Duke of Edinburgh, who announced his formal retirement from royal duties just last week.

A lifelong equestrian in a variety of disciplines, Prince Philip was seeking a new equestrian diversion when he retired from polo at the age of 50, and while carriage driving wasn’t initially on his radar he proved to be quite a hand at the lines. Misdee Wrigley Miller, a combined driver from the US, interviewed Prince Philip at Windsor to discuss his driving career — his first interview since his announced retirement.

Prince Philip is clearly doing “retirement” right — he’s been driving about the grounds at the Royal Windsor:

You could probably make a case that staying active with the horses and sport he loves is helping to keep Prince Philip “young” — he makes 95 look good. We can only hope to be doing this well!

….but Prince Philip, we wish you the happiest of retirements and continued joy of your horses. Thank you for your work in the development of combined driving as an international sport!