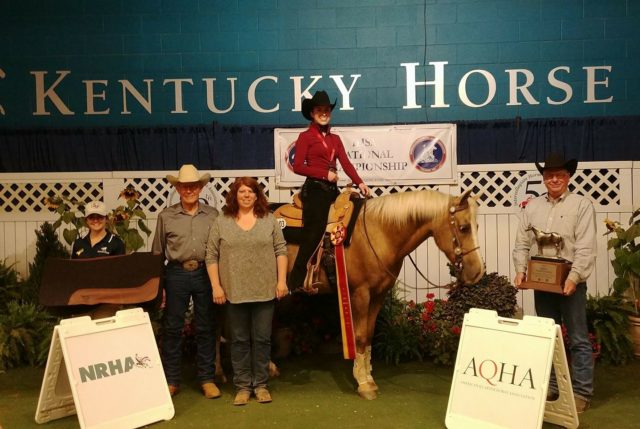 Our collegiate blogger came, saw and conquered at the Intercollegiate Horse Shows Association National Finals — and pens a heartfelt thank-you to the horses, volunteers and staff that made it a show to remember.

2017 marks the 50th anniversary of the Intercollegiate Horse Shows Association, a milestone all the coaches, riders, and volunteers celebrate this weekend at the Nationals show in Lexington, Kentucky. Three Alfred University riders qualified for the show: Lauren Cole in Walk/Trot/Canter hunt seat, Taylor Soderholm for Intermediate Western Horsemanship, and me for Open Reining, Open Horsemanship and the AQHA High Point Rider competition.

Everyone maintained a level of cheerfulness and camaraderie unmatched at other shows (especially shows of this caliber) that I have been to, making for a fun and supportive environment. Riders and volunteers worked together across both disciplines to maintain the efficiency of the show schedule and helped each other both in the show pen and outside of it. After we showed, riders were encouraged to write thank-you notes to the very generous sponsors of our classes and to the horses we rode.

The horses themselves were the stars of the show, tolerating a busy atmosphere, a wide range of riders, and a demanding schedule of classes to make the show run smoothly. Our own Alfred University “Dream Team” of horses, including veteran Frank with rookies Henry, Bubba and Kody all behaved wonderfully this weekend and made it in the ribbons every ride. A special thank-you goes to University of Findlay’s Harley, who carted me around my individual horsemanship class like a saint, a perfect gentleman despite my nerves, winning me a fourth place and a trip to the AQHA World Show in Oklahoma City.

SUNY Morrisville’s sweet palomino gelding Trigger gave me a fun and fast individual Open Reining ride where we threw in a couple of extra lead changes for fun, ending in ninth place to finish out the class and reminding me to be more careful about keeping leads across the center.

My next draw was a fancy horse named Blaze for the AQHA High Point horsemanship portion, who was an angel on the rail and incredibly tolerant of my butchering his cues during the pattern. I was asked to switch horses and do another pattern aboard Wayne, a big handsome gelding who carried me through a nice pattern despite my knowing nothing about him, to end third overall in the horsemanship portion. I am grateful beyond words to have the opportunity to ride such talented and tolerant horses this weekend — there are not enough peppermints in the world for such kind, forgiving souls.

My final ride on Sunday was aboard University of Findlay’s Danny Boy for the AQHA reining, where he did everything I asked and then some to earn a score of 145, finishing third and half a point below the leading score. These rides combined put me in second place overall to earn the title of AQHA Reserve High Point Rider, below Brittany Abernathy of Northeastern Oklahoma A&M College, a kind person and beautiful rider who had a phenomenal show this weekend. Incidentally, we also drew the same horses both in Amarillo, Texas at Semi-Finals and in the horsemanship class at Nationals.

IHSA staff in conjunction with founder Bob Cacchione have worked tirelessly to make the 50th anniversary year unforgettable, a feat they pulled off flawlessly by running an excellent horse show and team party complete with Team Spirit and Team Cheer competitions (and a big enough buffet table to feed the starving post-horse show masses). All the staff and volunteers went above and beyond this weekend, making every event special for the riders who made it this far, and taking care of everything behind the scenes that often goes unnoticed and without thanks. On behalf of my team and, I think, every rider here, I give my heartfelt thanks to everyone, horse or person, helping with the 2017 IHSA National Finals.

I would also like to thank my coaches, whose encouraging attitude, proclivity for mischief, and a century’s worth of knowledge and cowboy wisdom have made me the rider I am today, able to compete with the country’s most talented college riders. They have also taught me the importance of sportsmanship, of losing as gracefully as you win, of thanking your horse and handler after every ride no matter what.