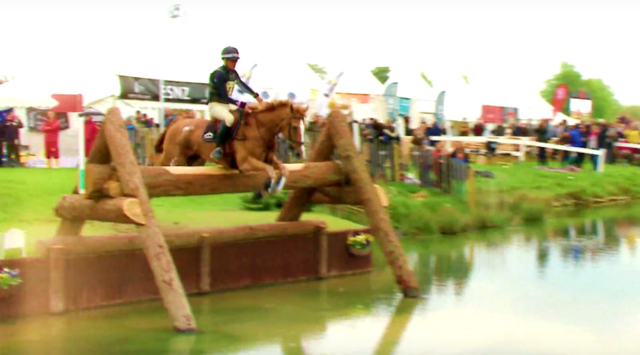 One of Great Britain’s epic four-star events, Badminton chewed up and spit out a field of competitors from all over the world, particularly with a notoriously difficult cross-country course. At the conclusion of Sunday’s stadium jumping, New Zealand took the day — Andrew Nicholson aboard Nereo finally brought home his first Badminton win, after completing the event thirty-seven times.

Friday evening after two days of dressage saw Nicholson and Nereo sitting tied for fifth with the USA’s Lauren Kieffer and Veronica with 38 penalties apiece; Christopher Burton and Graf Liberty led the way with the third-highest Badminton dressage score of all time at 32.9.

An epic cross-country day moved Ingrid Klimke and Horseware Hale Bob into the lead, but a clear round with just 2.4 time penalties kept Nicholson and Nereo well within striking distance in third place, just tenths of a point down from Klimke and from defending winner Michael Jung and LA Biosthetique Sam in second.

Both Klimke and Jung dropped rails in the stadium round on Sunday — and with a clear round and just one time penalty to add, Nicholson and Nereo had captured their first Badminton win.

This win is made more impressive by the fact that Nicholson was competing in his first Badminton since 2015 thanks to a neck fracture after a riding accident that could have easily been a career-ender. This is Nereo’s first clear round in a four-star since 2014. The stars certainly aligned for this pair in eventing’s comeback story of the year.

Here are the video highlights:

Click here to catch up on full rounds of competition from Badminton if you didn’t watch the live stream over the weekend!

For more coverage, head over to our sister site Eventing Nation to catch interviews and exclusive reports from Badminton.