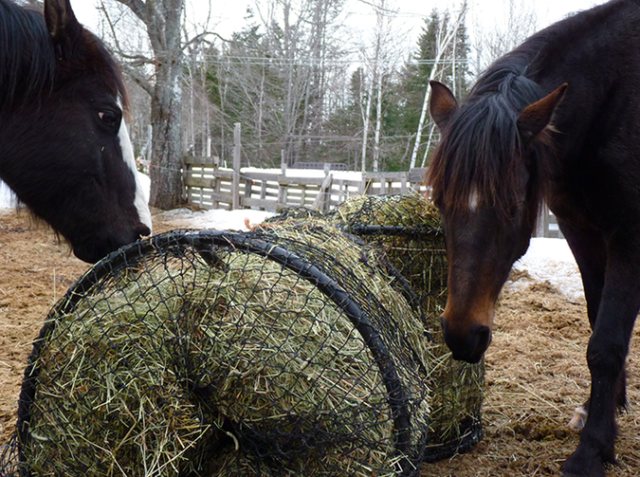 Learn more about this unique feeder in development!

The concept of a “perfect solution” in the horse world is pretty rare — there are plenty of aspects of horse care that simply aren’t going to change any time soon, such as horses needing to eat hay (unless you’re somehow lucky enough to have healthy grass pastures all year long, in which case, we’re all moving in with you).

Even this simple task — feeding your horse hay — is fraught with questions that need answering: round bale or square bale? Hay net or ground feeder? Slow feed or free choice? Is my horse eating his hay too quickly? What if there’s bad weather and I can’t make it out to the barn before the nets run out? What if I need my hay soaked?

In an effort to answer some of these questions as well as address some unique challenges of her own, horse owner Lisa Boudreau decided to build a better moustrap — and developed the unique Tumble Feeder. Part hay net, part bale feeder, the Tumble Feeder can be filled manually like a net and then placed in the pasture like a feeder — with one hand and no large equipment needed. We spoke with Lisa to learn more.

HN: How did you come up with the idea for the Tumble Feeder?

It’s hard to contain loose hay in the field — I was dragging a “kiddie pool” filled with hay out to my horses, which contained it a bit. I had the thought that it would be much easier if I could roll something with higher sides and that held more hay — that way I wouldn’t have to make as many trips. I was bitten by a tick in 2009 and by 2010 was hospitalized with advanced Lyme disease symptoms, so finding some thing that took less effort was key.  I couldn’t even look after the horses for months. A few years later my horse Master also developed advanced Lyme symptoms a year after I found a tick on him.

HN: How does the Tumble Feeder work?

It’s basically a rolling hay net with a flexible frame. So it’s easy to fill and even easier to move. I call it the “monster truck” of hay feeders, because it rolls over almost anything. It moves over mud or snow and it doesn’t sink. The first one I built was four feet across and had a removable top with mesh sides. I still use it every day! It wasn’t a slow feeder, but I assumed many people would want use netting to save waste and mess. After a few prototypes, I came up with something that allows the horse access to the hay regardless of the amount left or the feeder orientation.

The stall size holds up to a square bale and rolls from stall to paddock — it’s enough for 24 hours. It’s so light, it can even be hung for horses with shoes. There is a two bale size too — it’s that’s kind of heavy to hang up, but it works great for four or five horses outside. They can move it around which helps avoid a single messy, unhealthy feeding area. If you are on a steep hill, you can tether it. It’s not metal which makes safer and mouth friendly and it won’t ground out your fence.

HN: What makes this such a unique but effective tool?

The mobility is key, but it’s the patent pending “donut design” that makes it really special. This unique design makes it easy to rinse allergens from large volumes of hay. Instead of soaking a few flakes at a time, you can rinse and roll it and the water flows through one side and down to the other. You can wet a whole bale or two in two or three minutes. Then let it drip for a bit and off you go. I used it all winter as well with no trouble with freezing.

HN: Sign us up! Where can we buy one?

I am taking pre-orders through Kickstarter. Crowdfunding will help raise the money to get the feeders rolling. The people who pledge get a discount and will only be charged if the crowdfunding goal is met by May 25th. Pre-orders provide the volume to get bulk discounts on materials and shipping rates. Plus I need a horse-tough custom part manufactured. Any amount can be pledged to support the project!