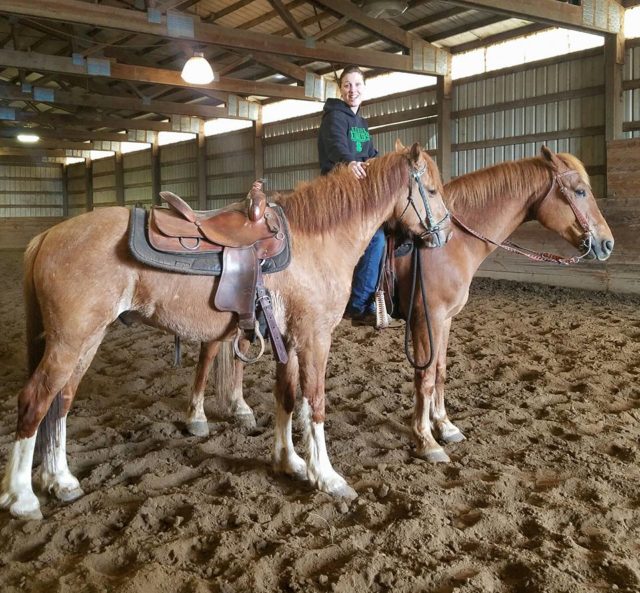 Biz Stamm follows up with the mother and son team working towards the Northwest Horse Fair and Expo mustang makeover. How did Jessica and Joe’s mustangs fare in competition?

Every March Oregonians flock to Albany for the Northwest Horse Fair and Expo. The expo features a wide variety of vendors, breed exhibitions and clinicians representing just about every discipline under the sun. One of the main highlights of the expo, receiving a prime time slot in the main arena, is the Teens and Oregon Mustangs mustang makeover competition. The competition consists of three phases: body scoring/showmanship, trail (in-hand for yearlings, under saddle for horses three and older), and a freestyle.

Earlier this year we checked in with Jessica and Joe Bishop, a mother/son team competing in the makeover. As I mentioned in my previous article, Jessica’s draw, Hershey was deemed “incredibly difficult,” by the competition organizers. Jessica initially thought she’d give it a shot, but two weeks from the expo, she decided that competing with Hershey would not be a good experience for anyone and accepted the offer of a redraw. Hershey clearly needed a slower approach to training, and she wanted to be sure that he received just that. Jessica kept Hershey at home and continued to work with him, but her makeover mount became Teddy, a sweet chestnut gelding with a laid back and completely lovable demeanor.

Jessica ponying on Teddy off one of her more experienced mounts. Photo courtesy of Jessica Bishop.

Joe and his yearling from the South Steens herd, Apollo, were a big hit the crowd, and I must say this kid has a future as a trainer if that’s a path he chooses to pursue. Apollo was very obedient, and clearly in tune with Joe, but he hadn’t lost a single ounce of his spunk and personality. During the in-hand trail portion, Apollo pranced around, making quick work of all the obstacles and looking truly pleased with himself after completing each one. For their freestyle, Joe started by showing off Apollo’s in-hand skills and ended with an adorable dance. (If that performance didn’t melt your heart, you’re a monster. Just sayin’.) The two ended up in 7th place out of a large youth in-hand division, earning a flashy buckle and some serious bragging rights.

When Jessica and Teddy entered the arena, I wasn’t sure what to expect. I had seen via her Facebook page that Teddy had been a pleasure to work with, but knowing that she had only had him in training for two weeks, I tried to keep my expectations realistic. Well, Jessica redefined what “realistic” means. After she had completed her trail pattern, the announcer informed the crowd that Jessica had only been training her mount for two weeks! There was an audible gasp from the peanut gallery, as they had just witnessed Teddy perform as well as the horses that had been in training for the full 100 days.

On the final day of the expo the mustangs used in the competition were auctioned off to pre-approved bidders. Not surprisingly, both Apollo and Teddy were quickly placed in loving homes, with Teddy’s new owner leaving him with Jessica for a bit of additional training. In a pleasant turn of events, Jessica’s original draw, Hershey, was also able to be placed in the perfect home with an owner who will continue to give him that slow and steady approach he needs.

I was completely inspired by Jessica, Joe, and having started off in the training world putting first rides on several BLM mustangs, I’m thinking that the Mustang Makeover at the Northwest Horse Fair and Expo is something I’d like to try my hand at in the not too distant future.  Thanks again to Jessica and Joe for allowing me to follow along on their journey, and an even bigger thank you for all the work you do on behalf of BLM mustangs.