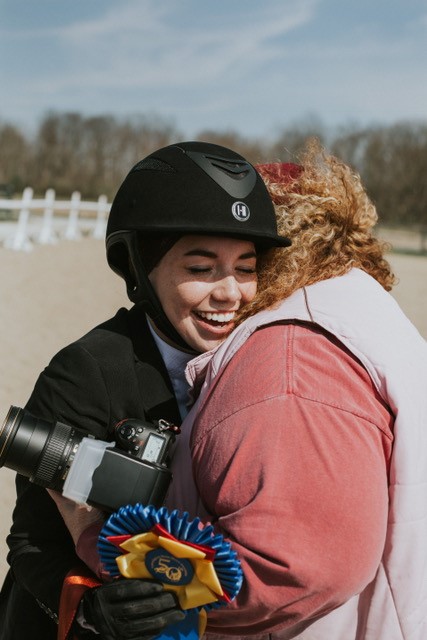 The Intercollegiate Horse Show Association, or IHSA, offers college student-equestrians a way to compete without having to own their own horse. With both western and hunt seat divisions, the IHSA has been developing young talent for 50 years now by offering friendly college versus college competition. With the IHSA National Finals quickly approaching, we wanted to spotlight just a few of the riders who will be making their way to the Kentucky Horse Park in May.

Daylan receiving a big hug from her mother after qualifying for Nationals. Photo by Lane Jones

At three years old Daylan Whittle began begging her mother for riding lessons, but her non-horsey family wasn’t quite sure if she had the attention span to stick with the sport. Despite her mother’s concerns, Daylan fell in love with riding and the rest was history. Her cumulative years in the saddle now total to 18, but 12 of those years were spent training and showing in dressage with a little eventing experience as well. Prior to joining the IHSA, she had no hunter/jumper experience, but after having to take a few years off from riding between her sophomore year of high school and enrolling at the University of Oklahoma, she was itching to get back in the saddle.

She knew that OU was where she wanted to attend and later heard that her college of choice was also home to an IHSA team, but she knew little about it and was afraid she might feel overwhelmed going into college. After a year of adjusting to college life, she began training for tryouts the following summer. Thankfully, after a great experience at tryouts, Daylan made the team in the Advanced Walk/Trot/Canter division — this is her qualified Nationals level, but she currently shows in Intermediate.

With her lease horse, Zappa. Photo by Deanna Whittle

“I knew going into this season that I had enough points that I could potentially qualify for Regionals, so I was already very motivated and focused on that first building block. That early in the season the thought of Nationals for myself never really occurred to me,” said Daylan. Seven women qualified from her team for Regionals, five of which moved on to Zones, including Daylan — this is a huge accomplishment and new record for their team.

After qualifying for Nationals, Daylan upped her riding schedule to two to three training sessions a week and has seen consistent improvement in her strength and riding skills, but this added workload has definitely posed a challenge for her. “As a senior, my course load has been more demanding than previous years… But my secret is you just have to tell yourself everyday to make the time. I know everything I’m doing is worth it and will pay off. It’s like the phrase ‘you get out what you put in.’”

Like many IHSA teams, the OU equestrian team must do a lot of fundraising due to limited funding — IHSA equestrian is not an NCAA regulated sport. (Many colleges designate IHSA teams as a club rather than an athletic team; therefore little to no funding may be available, depending on each university’s policies.) Daylan’s time as president of OU’s IHSA team has given her plenty of opportunities to boost her work ethic and responsibility factor, but according to Daylan, it is all worth it. “The best part is I have got to be part of a tight-knit group that I consider my best friends; we are like family. I don’t see a lot of organizations around campus providing the same qualities and lessons that IHSA does.”

She felt that tight family bond when she won her class at Zones, sealing the deal for her trip to Lexington. “Once they got to third I began to cry. I could see my mom also crying and my coach and fellow friend and teammates cheering me on. I remember running out of the ring to them at the gate after rewards. We fell into each other in a giant group hug. It felt like a dream. It was an incredible experience.”

What piece of advice does Daylan have for riders considering joining an IHSA team? Do it, but be flexible. It poses new challenges for each rider, but Daylan says if you find your focus and push through the things that make you uncomfortable it is worth it. And the life lessons it can teach you can greatly impact your life. “IHSA has shaped me in ways I didn’t know it would. I think the biggest change for me was my outlook on teamwork. Coming into college I had never been on any sort of team. I never played team sports so I wasn’t sure how I was well I was going to like being on the team. Turns out I love it. My team is my family. They are fantastic. Constantly someone is doing something for another teammate. I feel so humbled being their president.”

The Horse Nation family wishes Daylan and all of the other qualified riders the best of luck at IHSA Nationals at the beautiful Kentucky Horse Park in Lexington. Drop on by May 4-7th to watch some of the country’s young talent show off their years of hard work on horses they have never sat on before. A true test of any rider’s abilities, IHSA Nationals offers both western and hunt seat competitors at the top of their game a place to compete without owning their own horse.

If you are interested in more information on the Intercollegiate Horse Shows Association, check out the website and follow on Facebook. And don’t forget to keep reading Horse Nation for more exclusive rider profiles for those who have qualified for IHSA Nationals!

Are you a college rider, college bound in the fall or searching for the perfect equestrian school? Network with other students at our new College Equestrian message forum!