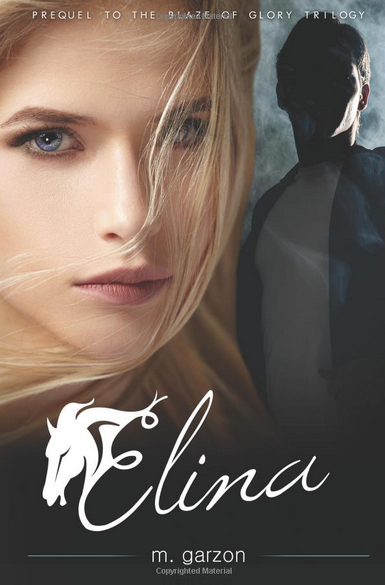 Prequel to the ‘Blaze of Glory’ trilogy by M. Garzon.

My knowledge of the Blaze of Glory trilogy is limited only to the review of the first novel that ran on Horse Nation way back in 2012 — a young adult romance novel through the lens of the riding stable. Garzon’s newest novel Elina serves a prequel to Blaze of Glory, presumably setting the stage for the trilogy.

Elina Everson is a young struggling single mother of twins (Seth and Téa) who somehow scrapes together enough funds to buy her children a package of ten riding lessons at a local horse farm. Arriving late for the first lesson thanks to, well, life, Elina is taken aback by the direct and to-the-point attitude of who she assumes to be a stable hand who ends up teaching the first lesson as the instructor has gone home. For as curt as Declan the stable hand speaks to Elina, he proves to be an excellent teacher for the twins and the nine-year-olds are immediately hooked on horses.

From a horsey perspective, watching children fall in love with horses and find a home in the community of the lesson barn from the point of view of a safety-conscious non-riding mother is charming; Elina’s naivety in the barn is carefully shaped by an author that clearly knows her own way around a stable. That particular aspect of the storyline will be familiar to any reader who essentially grew up at a lesson barn. The point of view of the modern single mother gripped me right from the beginning, though I had to laugh when Elina barely has time to drink a cup of tea and relax on a typical day yet somehow whips up a quick hand-knit hat AND scarf for Declan for Christmas just a month and a half after meeting him for the first time.

The novel’s main plot, however, centers around Elina interviewing for a job that would include better pay to help her make ends meet with raising her family, but also would involve a major move to a new city. For readers looking for a plot with twists and turns and a big reveal at the end, this is not that book — the entire novel is essentially summed up on the back cover up until the last chapter, and with most of the major romantic tropes already in place (main characters who initially don’t get along, falling for each other despite logic, larger life events pulling them apart, etc) it’s fairly predictable how this story is going to end. (And I suppose if you’ve read Blaze of Glory, you probably know all of this is going to happen already anyway.)

I’m not much of a romance reader, but I do understand that the genre is not necessarily meant to serve as social commentary. Despite my constant reminding myself that this was just supposed to be a fun, quick read — a mental candy bar, if you will, not a three-course meal — I still thought the conclusion of the novel was troubling. Declan’s constant “mansplaining” and his easy solution to the problem of Elina needing to move to find a better job to support her family undercuts Elina’s independence and strength. The novel tries to sell this as Elina putting the needs of her children first, but to the reader it feels like she’s walking into some sort of trap. When Declan mentions in an offhand way that Elina could go back to school to be a teacher if she so desired, it feels like a throwaway remark; Elina mentions in passing once that she wanted to be a teacher but it’s never defined as a major part of her character.

But wait. I digress. After all, this is supposed to be a fun romance, and all of the characters wind up happy. If you’re seeking an easy read for a bit of entertainment full of accurately-portrayed horse scenes (and we all know how truly hard those are to come by in books these days!) pick up a copy of Elina. The book is available on Amazon.