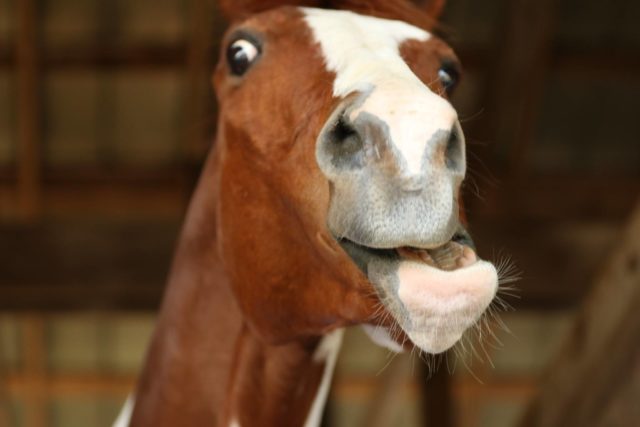 He’s beauty and he’s grace… and yet he’s also totally capable of making some incredibly derpy faces. Enjoy this week’s reader-submitted photo challenge of the noble horse in his less-noble moments.

“The outside of a horse is good for the inside of a man,” said Winston Churchill. While he probably meant that the beautiful, noble, powerful, graceful appearance of a horse in splendor is an uplifting, comforting, inspiring sight for all of humankind, we’d also like to think he meant that horses caught in a “derp” moment were good for a belly-laugh, and who doesn’t need one of those every now and then? Behold, the derpiest 44 horses of Horse Nation as submitted by our readers for this week’s photo challenge.

The boys wanted their cookies for not taking their fly masks off in the pasture. Photo by Loryn Utech.

Thunder, enjoying a shake a little too much. Photo by Anita Reyes.

It’s so hard standing after a workout. Photo by Kimberly Reese.

Got this as she was shaking after a roll. Photo by Wesley Schroeder.

My Arab, Al’ain Oasis. He had a long day. Photo by Heidi Cladyne Barrett.

I… I don’t even know… he just kept doing this over and over. Photo by Ainsley Jacobs.

Jackie Schultz DeSpirito: Well this one is easy. Our one-and-only recognized show. Yeah. So far… Photo by Laine Ashker.

How do you pick just one??? Callie’s middle name is derp! Photos by Hope Carlin.

One of our Tennessee walkers Nika. Photo by Sahvannah Johnson.

Chevy. Extremely unhappy and surprised that something has been added to his grain… Photo by Arean Srock.

Ransom trying to hog the camera. Photo by Emily Brickey.

This guy. Does this when he is bored. Licks the side of his face. Dufus!! Photo by Cath Anney.

Bailey playing with me in the paddock. Photo by Melissa Rodgers.

Pete looking to the sky. Photo by Apryl Attwood Thomas.

The derp is strong within this one. Photo by Rose Albrecht.

Hi my name is Pistol and I’m kind of a dork, treats just fall right out of my mouth sometimes. Photo by Hailey Longstreth.

Betty Blanton: Joy is my girl. Photo by Becky Blanton.

Photo by Natalie Claire Mine

What you get when you try to take pictures of your horse while she stuffs her face ?❤️? #horsenation