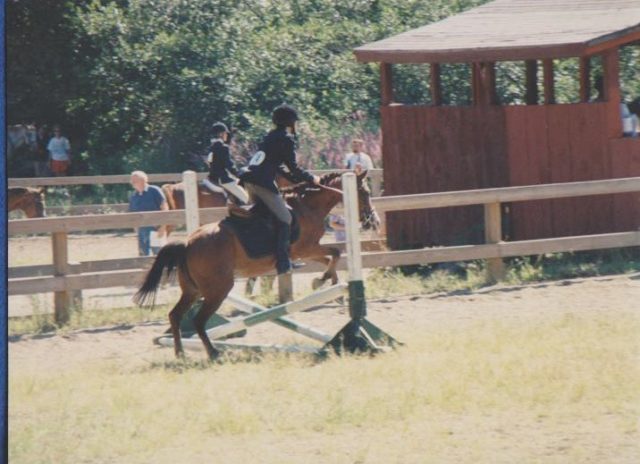 The writing staff reflects on the lesson horses in their lives.

Whether your first riding lessons were formal affairs in an arena with an instructor or involved clambering aboard and figuring it out for yourself, all of us started on a lesson horse. On the last Tuesday in April, Horse Nation takes a day to thank these special horses who started our equestrian journey — and because our staff writers are all riders just like you, we have our own thank-yous to share.

Meagan DeLisle: You can keep your tall bays with chrome, your sassy chestnut mares, and your slender grays — my favorite lesson horse of all time was an elderly, mottled face, Appaloosa pony by the name of Susie Q. Our barn acquired her as a saintly larger lesson pony for our younger riders and as the shortest adult at the barn, it was up to me to give her a good test ride when she first arrived. It was love at first ride. She hated cantering and broke down frequently, she barreled through crossrails without a care, and it took a crop… or two… or three to get her to go forward.

But she was a saint. She was the first to meet you in the paddock and the last to leave you alone. She was gentle in the stall and while it was work to get her to go, she tried her little old heart out. We would go to the barn on Saturdays while I was still in college to school all of the lesson horses and the only one I wanted to ride was my old pal Susie Q. While Susie is no longer at our barn (she got to retire at home with her former owner where she is being spoiled rotten), it will take a special horse or pony to take her place in my heart as my favorite lesson horse. You could trust her with the tiniest of kids and all of your secrets. Pretty is as pretty does, but I think Susie’s soul made her the prettiest pony in the world.

The best pony in the world. Photo by Kellie Holman

Morgane Schmidt Gabriel: While I certainly owe a great deal of gratitude to those first kindly beasts whose patience allowed me to learn such mundane tasks like mounting, posting, and steering (and to those less than kindly ones who taught me one rein stopping, emergency dismounting, and gracefully falling), I should also thank the string of horses that came after that have allowed me the opportunity to continue learning the innumerable nuances of good [acceptable?] riding. Because you’re never through learning — and we humans are painfully slow learners in many ways– it’s really their patience with our ineptitude that makes us competent riders as well as a better human beings. I mean let’s be honest, I’m pretty sure that I need to do more canter pirouettes/sequence changes/extended trots/etc than my horse does. And it’s really my bumbling around and inability to count that means he has to do 4 lines of tempi changes instead of one. Yet even though I’m sure he’s wondering why his human is so painfully dense, he continues to truck along and let me figure it out. So kudos and thanks to all the fabulous horses in my life; my riding skills are largely due to their hard work, generosity, and patience.

Morgane with Stormy, the horse who continues to make her think she knows what she’s doing. Photo (c) Tamara Torti

Lorraine Jackson: There was a pony at my barn who had been doing what we call the “up-down” lessons for years. We call them that because the majority of the lesson is spent at the trot with our beloved coach yelling out “up! down. up! down.” to teach new students to feel the post. That little pony, Trouble, could do that ALL DAY without complaint. Until one day he couldn’t. That scrappy little pony babysat children and small adults for so long, I’m not sure he remembers any other life, but he never complained about his job, even with years of Cushings and a constant battle against laminitis. The little man made his trek into the stars this past year the best possible way I can imagine a pony going: after a day of eating himself silly and being hugged and loved on and cried on by nearly every single little girl in the barn. I guess now I know why he never complained.

We miss you every day, little guy.

Kristen Kovatch: When I look at my draft team (yes, I do still get a little thrill from saying “my draft team” almost a year later) I forget sometimes just how rare and special they are. I don’t know two other 18-hand horses with feet big enough to cave in the wall who are patient enough to have taught well over a hundred people how to drive in a four-year span — that’s a hundred different sets of hands with varying levels of prior education towing on their mouths, clumsily learning how to give cues, awkwardly thrusting the bridle over their ears and tentatively leading them back out to pasture again.

Despite the array of their students, from lifelong riders to total equine novices — some students of ours had never even seen a horse before — I have never once seen Rocky and Randy take advantage of lax or mixed signals and put anyone into a dangerous situation. Obviously, two tons of draft horse towing about some fairly inexperienced young people can easily be a recipe for disaster, but the ability of these two horses to quietly go about their business and teach semester after semester of grateful college students the magic of working with drafts left a deep impression upon me.

…even now, when they’re semi-retired and super sassy about doing things they’d rather not. Apparently, I’ve passed Draft Driving 101 and have moved on to some advanced level.

Biz Stamm: The best things in life often come in small packages and that was definitely the case with Tonto.  Tonto was a 13.2 hand, bay Welsh pony, and the star of the lesson program at the Cutter Farm in Dracut, MA.  Tonto had been successful pony jumper in his younger years, but it wasn’t his talent over fences that made him so special.  It was his ability to read his riders and give them EXACTLY the ride they needed. It was this talent that earned him the moniker “Tonto the Wonder Pony!”

If you were unbalanced he would take slow (sometimes excessively slow, but still better than the alternative). If you were shy, he would be sure you outshone everyone else in your lesson group to boost your confidence. If you were confident, you could zip around a jump course like nobody’s business.  It you got too confident, verging on cocky, he would dump you in the mud, though sometimes he did that for fun…because he was a pony. Tonto was much more than a lesson pony.  He was more of a life coach to dozens of children during their most formative years.

Biz, age 8, riding in her first ever jumping class on Tonto the Wonder Pony in Westford, MA

Leslie Wylie: #ProTip — A great way to score free lessons growing up, if you’re sufficiently competent/tenacious/desperate/brave, is to volunteer to lesson on school horses that no one else wants to ride. As in, not even your trainer wants to ride them. But if their lunatic student wants a go at it? Sure, kid. Jump lesson at 4 p.m. See you out there.

I rode, and got dumped by, a lot of school horse baddies: stoppers, buckers, rearers, runaways, rogues, attempted child assassins and assorted variations on the equine psychopath theme. Riding them got me a lot more than free lessons — it taught me how to deal with “problem horses,” figuring out how to get them on my side through trial and error, a skillset I’ve been calling up on with frequency in the decades since.

To all the rogue school horses who taught me so many lessons (the hard way!), I extend my middle finger. And also a sincere thank-you.

Leslie at a show at the Kentucky Horse Park in 1995 with her first horse, Mishka, who was only a part-time baddie! Leslie still owns Mishka, who is now 28 years young. Photo by Leslie Wylie.