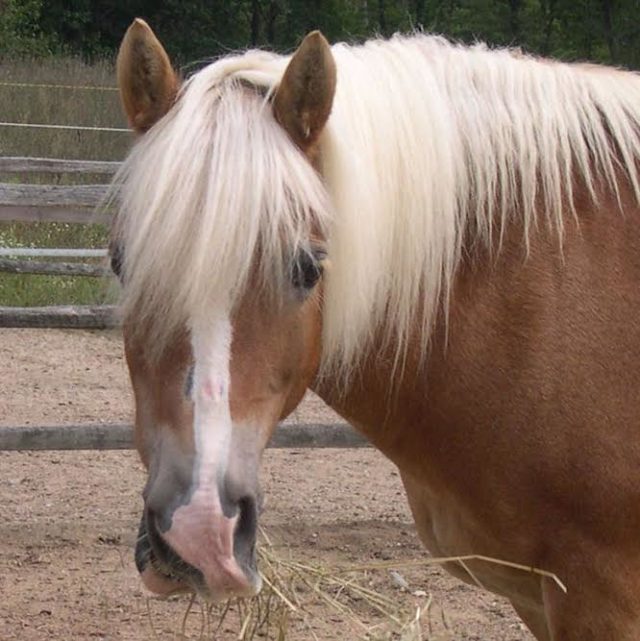 Linda Watson-Call writes a beautiful tribute to a special therapy lesson horse named Stella who changed the lives of everyone around her.

Saying good-bye to a loved one, whether human or furry, is never easy. And with Stella, it was an event I didn’t want to face, but knew it was inevitable, since she was now 28 years old.

We purchased Stella in November – Thanksgiving weekend to be exact – in 2003. We had just completed the pilot for our therapeutic riding program, and although our young, energetic horses were willing, I knew we needed what I lovingly called a “grandma” horse. My husband, Tom, started by calling members of the Haflinger Association that we belonged to and stumbled across Stella. He checked her out, said she would be a good fit, and we purchased her.

She was about three inches shorter than the rest of the herd, and a little draftier. To be honest, a lot draftier and about 250 pounds overweight. But, she was gentle, accepting of our riders, and eager to please.

A therapeutic horse has a big responsibility. The horse has to be able to accept riders with anxieties, or no balance, or sudden outbursts without reacting. It really goes against what we know about the fight or flight instinct that every horse possesses.

One of Stella’s first riders was a young boy who was terrified of moving on the horse. He would mount up, but his anxiety was so high, that it took almost the whole class to get him to walk two or three steps. Stella stood, and stood, and stood, barely moving her muscles so he wouldn’t panic. And when she did move, it was a small step.

Another rider came for her first “try” at riding and did not want to get on. So we brushed, and brushed, and then brushed some more. Finally, the very young girl got on and took a stroll around the arena. Decided she liked it and rode for the next six years – strengthening her core, balance, and muscles. This same young girl could not ride a bicycle. After a few years of riding, she not only could ride, but eventually was able to do 25 mile rides to raise money to cure Juvenile Diabetes. Thanks Stella!

My husband swore Stella tiptoed around the arena whenever we had a more fragile child on her back. She was so totally aware of the passengers she was carrying.

She also had an awareness of not only the rider but everything on and around her. Most of our volunteers are experienced horse people, so I trust that they can tack up a horse. But on one occasion, Stella would not stand at the mounting block. The volunteer walker her up for her young rider and before I could get the rider on, she swung her rump away from the block, facing her rider, so the child could not get on. I felt a little irritated with her, asked the volunteer to lead her away and bring her back up. She did, and Stella immediately swung away. I put my hand on her side and as I touched the latigo, the cinch fell away from the saddle! I retacked her and with the cinch and latigo properly in place, she stood correctly to be mounted. She was not being ornery – she was protecting her rider!

I always felt that if a horse reached 25 years, every day after that is a blessing. A few years ago we had a winter of non-stop below zero weather. We do not stall our horses and I was concerned that we would lose Stella in the brutal winter. But her thick golden coat kept her warm enough.

Then, two years ago she started losing weight. Our vet suggested feeding her separately and offer second cutting hay instead of first. She regained her weight and muscle in a very short period of time. Sometimes we think she enjoyed her special treatment. Nickering to us when we came into the barn as if to say, “I’m ready for breakfast, let me in!” We could open the door and she would go to “her” eating stall automatically – no lead line required.

But last fall, I noticed that although she still enjoyed coming to the arena for lessons, she was not willing to trot her young, light riders. She was definitely slowing down.

And so, as we said good-bye this past February, we ended the legacy of a horse that captured the heart of every rider she had as well as the parents of those riders. But her spirit will live on forever in our hearts and memories.