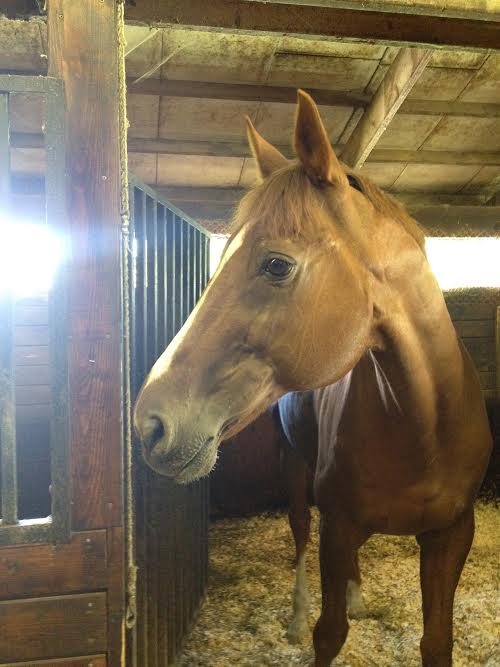 When I think about him, that is the first thing that comes to mind. When the people who knew him talk about him, that description always comes up. He was special in many ways, not all of them good. Cinema was a hard horse to get to know. He was skilled at scaring people off with his cranky expressions, ears pinned back against his head so flat you’d wonder if he even had ears at all. Normally, I have a healthy dose of respect for horses who look at me like they want to take a chunk out of me. When Cinema made that face at me, I’d just laugh at him and march into his stall, handing him a palmful of gummy bears as I did so (those were his favorite).

Cinema didn’t go to people. The people had to go to him. It took years for me to prove to him that I was worthy of his trust and affection. He taught me patience. Oh boy, did he teach me patience, because even though I knew without a doubt that we were soulmates right from the start, Cinema wasn’t as sure as twelve-year-old me was. When I finally received a pair of pricked up ears instead of a death glare when I opened his stall door, the waiting was worth it.

In addition to being a tough horse to get along with, he was a tough horse to ride. I grew up learning from incredible coaches, but Cinema taught me more about my body position in the saddle than they ever could. If I was sloppy with my posture and my cues up to a fence on another horse, the jump would be sloppy, my coach would correct me, and I would try and ride better to the next one. If I had poor positioning and didn’t give firm enough cues on Cinema heading to a fence, I ended up in the dirt. Which do you think made a bigger impression?

Cinema taught me to have confidence in myself, because there were a lot of days when I had to be brave enough for the both of us. He liked to jump, but he was really pretty convinced that were were monsters on the other side of those fences. If you didn’t believe everything was going to be fine on the other side, then there was no way he was going to give you an ounce of help. In our later years, I was able to hop on him and float the reins at him and just think about what I wanted him to do and it would happen. The amount of trust I placed in this horse was probably more than I should have. But, being logical isn’t something you think about when you’re a teenager and head over heels in love.

This essay was hard for me to write. I didn’t know what to say. How do I tell you about one of the most important figures in my life in eight hundred words? How do I tell you about this amazing animal that I met when I was twelve years old who essentially helped raise me and shape me into the person I am today? Should I tell you how lost I’ve been without him since he suddenly passed away almost a year ago? Do I try and explain how I’ve struggled to figure out how to exist in a world where he doesn’t anymore?

I didn’t get to see Cinema as much as I wanted to during the last few years of his life and it kills me that I feel like I’ve failed him when he gave me so much during our time together. The guilt haunts me now that he’s gone, knowing that I wasted so much time because I always thought we had more of it. Cinema was born in 1986. I knew he wouldn’t be around forever. I swear I did, but that doesn’t change the fact that I felt like I’d been sucker-punched the first time I walked by his stall and he wasn’t in it.

There is so much more I wish I could tell you, so many more moments Cinema and I had and lessons he taught me that I would love to share with you. I’m sorry you didn’t get to meet him and now have to hear about this incredible teacher from me, one of the girls who loved and adored him and did not deserve him.