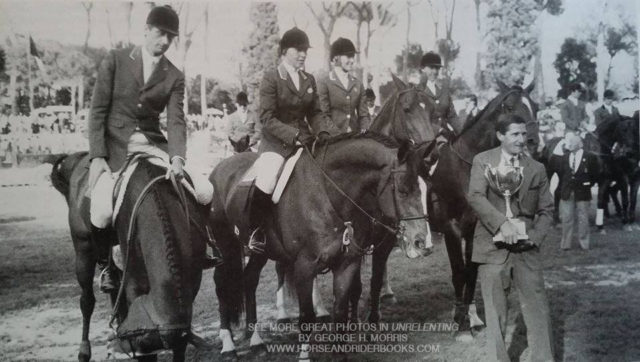 Having less resources didn’t hold Melanie back – it made her into a champion.

GHM with the US Team of (From L-R:) Joe Fargis, Melanie Smith Taylor, Anne Kursinski, and Katie Monahan Prudent after they won the Nations Cup at Rome in 1983. Photo Credit: L’Année Hippique, Courtesy of Jennie Carleton.

There’s a dark allure to the Global Champions Tour for me. One the one hand, the grandeur and spectacle of it all is mesmerizing. On the other hand, it also makes the whole dream of it feel so far away.

It sometimes feels like they’re literally living on another planet from us. A world filled with first class tickets from one show to the next, and a team of people to get you there, while we change a muddy tire on our run-down truck on the side of the road for the umpteenth time. It’s amazing and depressing all at once.

It brings me back to earth when you see moments like the one we brought you last year of Nick Skelton and Laura Kraut spreading their own shavings at a show, or the humble attitude and graciousness of McLain Ward after we won the FEI World Cup Final. But my favorite “YOU CAN DO THIS” anecdote comes from a little further back: Olympic Gold Medalist Melanie Smith Taylor.

In Unrelenting: The Real Story—Horses, Bright Lights, and My Pursuit of Excellence by George H. Morris, Melanie provides a candid vision of her introduction to the man who would launch her career. At the time (the late 1960s), she had only taken lessons with her mother and at her local pony club, but her mother was a good horsewoman, and knew her daughter was the real deal. They’d heard George Morris could make solid riders into champions, and in Melanie’s words,

“We hitched up our purple station wagon to our matching two-horse trailer and drove eight hours on two-lane roads to Germantown, Tennessee for a lesson with him.”

If you consider everything you know about GHM, you can imagine how horrified he was at the sight of that purple concoction. You can guess the looks she got from other riders. But dang, the girl could ride.

She had to make a few more good impressions on him before she got her shot, but finally, he invited her to come along to the winter circuit in Florida. When she won the first recognized jumper class she ever entered, George invested in her 100% until the day she won her Olympic Gold Medal.

Melanie had to work ten times as hard as his other students – trading lessons for grunt labor of mucking stalls, braiding, and exercising horses. But that hard work turned her into a machine, and she never took a single lesson for granted. Arguably, having less resources didn’t hold Melanie back – it made her into a champion.

“I’ll tell you this: I never paid for a lesson with George ever, my entire life,” Melanie said. “He was so good to me. He knew I couldn’t afford it and that I would work for everything.”

Melanie of course went on to be one of only two riders to ever win the Triple Crown of American Show Jumping: The American Invitational, the International Jumping Derby, and the American Gold Cup. She won the FEI World Cup Final in 1982, and was part of team gold at the Los Angeles Olympic Games in 1984. She made it happen through sheer will and hard work, not through dollars and cents.

We know money is what makes the world go round, but if you’re breaking your back to stay in the game, never forget the deep-rooted principles of Melanie’s success:

If the red jacket is the thing you want more than anything else in the world, do not let money stop you. Do not make excuses. Do not give up. This is the great adventure of our sport, and you have the same right to glory as anyone else.

Go Melanie, Go Jumping, but most of all, GO YOU.

If you’re interested in Unrelenting: The Real Story—Horses, Bright Lights, and My Pursuit of Excellence, visit Trafalgar Square Books online to pick up a copy. Melanie Smith Taylor also has a recently released book called Riding With Life: Lessons from the Horse which you can purchase here.