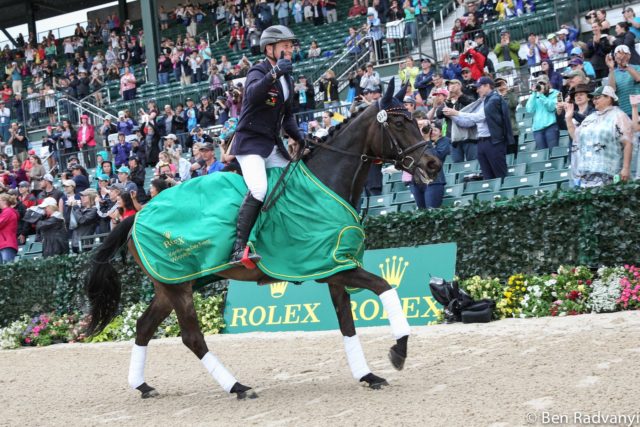 Whether you’re a seasoned Rolex veteran or a first-timer to the Kentucky Three-Day Event, plenty of activities await at the Kentucky Horse Park next weekend (in addition, of course, to the competition itself). Meagan DeLisle brings us the scoop.

As the end of April quickly approaches, many equestrians wait on the edge of their seats for their favorite weekend of the year: the Rolex Kentucky Three-Day Event (RK3DE)! Since 1978, Equestrian Events, Inc. (EEI) has organized this upper-level competition that many refer to as a staple in our industry and history and each year the event gets bigger and better. 2017 is sure to be no disappointment with new additions to the lineup as well as returning favorites. We sat down with Lee Carter, Executive Director of EEI, to talk about all the exciting details of this year’s RK3DE.

As always, EEI has selected an official charity to support during this extended weekend. This year they’ve chosen to support Central Kentucky Riding for Hope, a group based out of the Kentucky Horse Park (KHP). This wonderful charity provides equine-assisted activities and therapies for individuals with disabilities to enjoy and engage with. Thursday evening at 6:30 PM in the Big Barn at the KHP there will be a gourmet Farm-to-Table fundraising dinner prepared by two local chefs, Jeremy Ashby and Jane Thompson, who will serve traditional Kentucky cuisine. You can get more information and tickets to this event at www.RK3DE.org/farm-table.

EEI is proud to offer for the third year in a row the RK-5K Twilight Race on Friday night for community members and Kentucky Three-Day fans alike to participate in and enjoy.

A new addition to the event this year is Marla & Oscar’s Beer Garden (named after EEI’s office dogs), which will be located across from the Rolex Stadium in Sponsor Village. Three Lexington based breweries, Blue Stallion Brewing Company, Country Boy Brewing, and West 6th Brewing, will be there to showcase their craft beers. Marla & Oscar’s will be open Thursday through Saturday 10AM to 5 PM (with extended hours on Friday for the 5K race) and Sunday 11AM-4:30PM.

And on Sunday morning, spectators can enjoy a new feature called Champions Live! This event will start at 9:30 AM and is sponsored by United States Eventing Association, United States Hunger Jumper Association, and United States Dressage Federation. This session, free to Grounds Admission ticket holders, will feature past champions from each discipline talking about their careers and will be moderated by Jimmy Wofford.

A new sponsor will also be joining the RK3DE family this year. Kentucky Equine Research is the leading company in equine nutrition and a huge support of equine competition around the world. Returning favorite sponsors and vendors such as the Land Rover and Dubarry of Ireland will also continue their attendance. Lee stated that one sponsor, Bob Mickler’s, has been a sponsor since 1978 and EEI is excited to have them continue again this year.

And as always, the competition itself promises not to disappoint. From rookies to Rolex returnees, there will be a great mix of talent competing for the top prize. Speaking of prizes, did you know that the prize money has been increased to $400,000, with the winner taking home a whopping $130,000?

Whether you’re an eventer or just an avid horse lover, a weekend away at the Kentucky Horse Park watching the elegant movements of dressage, daring feats in cross-country, and quick decision making of stadium is a weekend all equestrians can enjoy. Tickets are still available, so head on over to www.RK3DE.org and snag up a pair to secure your spot in the fun!