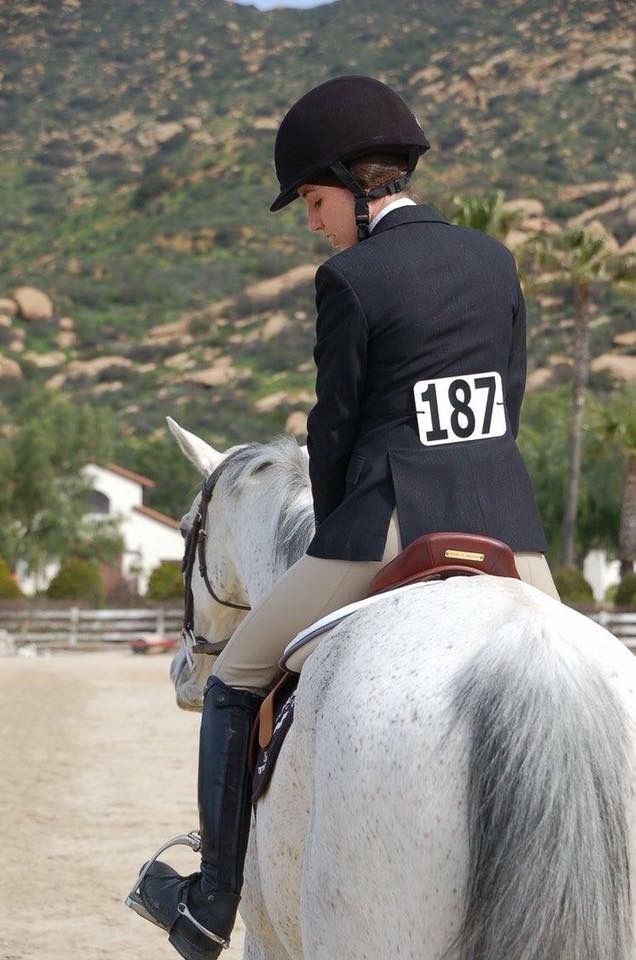 The Intercollegiate Horse Show Association, or IHSA, offers college student-equestrians a way to compete without having to own their own horse. With both western and hunt seat divisions, the IHSA has been developing young talent for 50 years now by offering friendly college versus college competition. With the IHSA National Finals quickly approaching, we wanted to spotlight just a few of the riders who will be making their way to the Kentucky Horse Park in May.

Megan Manning started riding in 2005 after her parents’ approval to begin taking lessons at a barn just down the road from her home. Less than a year later, she was competing in hunter pleasure and sporthorse under saddle on the Arabian circuit with her own horses. In 2010, Megan expanded her equestrian knowledge and began dabbling in dressage where she has been competing on the open breed dressage circuit since 2014. She currently holds her Bronze Medal and working towards obtaining her Silver with goals of competing in the Prix St. George sometime next year.

At a club fair during her freshman year, Megan came across the ASU’s IHSA team and decided to sign up for tryouts. After securing a spot on the competition team, she was hooked. Megan jokes that she is known as the token dressage rider on the team. “As you can probably tell, throughout my 12 years of riding, I haven’t really jumped. I came into IHSA with little to no experience in the hunter/jumper world, and everything that I now know about hunters, I learned through the team.”

Megan attributes her dressage background for helping her qualify for Nationals two years in a row, but it is obvious her determination and dedication has also played a huge factor. She has spent the last year preparing with lots of training focusing on no-stirrup work, avoiding the ER (she jokes she has probably seen more ER visits after practice than any of her teammates and has actually broken a bone without falling off) and keeping her school work in line. As a member of the Honors College, her GPA is extremely important to her and in order to balance riding and school work she has become the master of creative scheduling. “It involves a lot of 5 AM alarms, late nights of studying, and wearing riding clothes to places where it’s probably not socially acceptable to smell like a barn,” says Megan as she explains her typical day.

IHSA has impacted the lives of many young equestrians and Megan Manning is not exempt from that group. In fact, she attributes her time in IHSA to the boost of her self-confidence when competing. “I think there is a common trend among riders to be constantly putting themselves down before they go in the ring. I’ve always been insecure before going into a ring full of riders who I know have years of experience on the actual hunter/jumper circuit. I have had to learn to kick this bad habit of telling myself that there is no way I can be competitive among them because I am ‘just’ a dressage rider.” After qualifying for Nationals in her freshman year, she found herself believing in herself and her abilities as a competitive equestrian.

To fellow equestrians considering joining an IHSA team, Megan offers up this piece of advice. “Ride everything and anything. The tricky part about IHSA is the catch riding. You can be the most amazing rider on your own horse, but if you’re only used to that one type of ride, you may be surprised as to how difficult it is to show a random horse and look good at the same time.”

If you are interested in more information on the Intercollegiate Horse Shows Association, check out the website and follow on Facebook. And don’t forget to keep reading Horse Nation for more exclusive rider profiles for those who have qualified for IHSA Nationals!

Are you a college rider, college bound in the fall or searching for the perfect equestrian school? Network with other students at our new College Equestrian message forum!