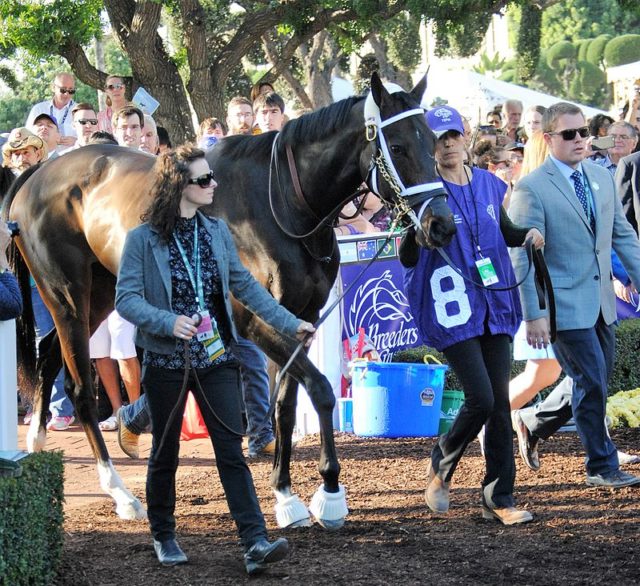 The two-time Eclipse Award winning mare has nothing left to prove.

Connections announced on Tuesday, April 18 that the two-time Eclipse Award winning turf mare Tepin was retiring from racing. According to Paulick Report, owner Robert Masterson reported that there was no physical issue with the horse; she was simply not interested in running any more.

Plenty of racing fans had speculated what the next step would be for Tepin when the mare refused to train in late March at Palm Meadows — it did seem apparent that perhaps Tepin had decided it was her own time to retire. Wisely, her connections including trainer Mark Casse decided the mare had nothing left to prove, and it was time to take her off the track.

Indeed, there is little left for this mare to achieve: achieving mild success as a juvenile and three-year-old, it was as an older, mature mare that Tepin truly thrived. She was named Champion Female Turf Horse in 2015 and 2016. She won the Breeders’ Cup Mile in 2015. In June of 2016, she shipped to England for the prestigious Royal Ascot meet and won over a straight mile in the Group I Queen Anne, without her customary raceday Lasix and breathing strip. She followed this win with a victory in the Woodbine Mile in September, where the crowds chanted her name. A back to back Breeders’ Cup victory was not to be, but she earned her second Eclipse Award regardless.

Tepin proved so many things: she could run against males, she could run without the medications that are so heavily used in the United States, she could win over turf in Europe in a race never before conquered by a North American horse.

It’s too late in the current season for Tepin to be bred; for the time being she remains with Casse’s string at Churchill Downs. Masterson states that “she owes nothing.” What a fitting retirement for a horse who has given us so much.

Tepin, we wish you a happy retirement and we thank you for the memories.

[‘Queen Of The Turf’, Eclipse Champion Tepin Retired From Racing]