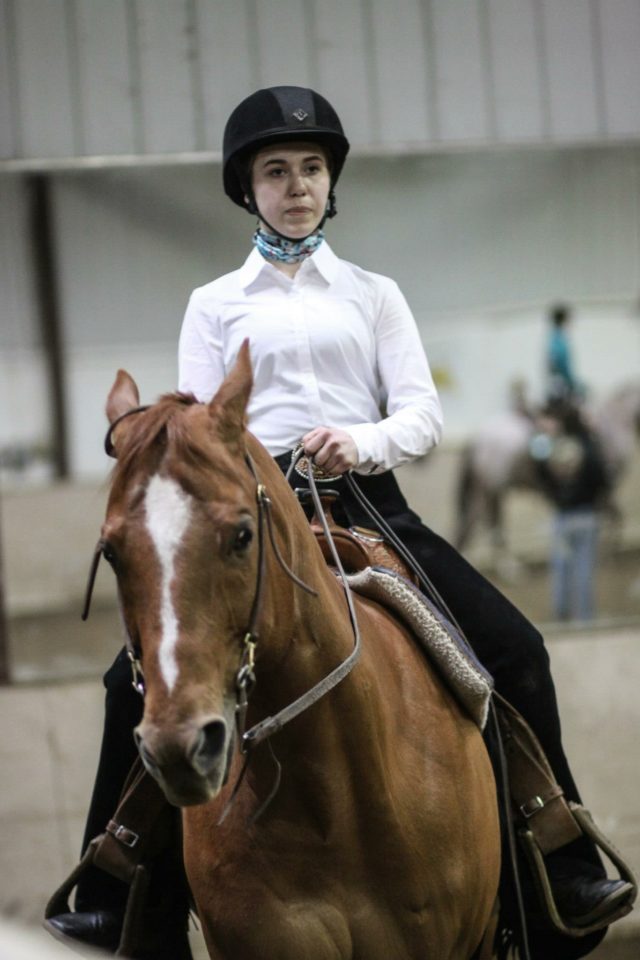 The weird expressions you have in horse show photos.

Hard to say who is making a better face in this photo. Photo by Maria Hurd.

Since I am mostly mediocre at everything I do, I try to work hard enough for my teachers and coaches to appreciate the extra effort I put in. My style of athleticism has never been elegant, but scrappy and determined. In photographs, this is especially apparent — in high school softball, for example, the newspaper photographer took a picture of me tagging someone out at first base in which I closely resemble Oscar the Grouch from Sesame Street. A family friend mailed me a sympathy card with that picture enclosed.

This legacy continues in my riding, from interscholastic horsemanship pictures in which I’m somehow blinking one eye at a time or look like I’m about one hundred years old and in great pain, to present-day reining pictures in which, as my coach puts it, “You look like you chewed nails for breakfast.” As fate would have it, the horse show photographer chose that particular reining picture to be the cover photo for the whole show’s album. My coach Steve called me up to his office the next day on the grounds of “needing to discuss something,” but in truth he just wanted to pull the image up on his computer to laugh at it some more.

At a reining show this summer when I had the opportunity to show one of Alfred University’s school horses, the show photographer took pictures throughout our pattern, one of which turned out great — it’s during a sliding stop, when Jeri is really in the ground with lots of dirt flying. Since my position isn’t altogether terrible in it (I don’t look like I’m about to fall off), I bought the image and framed it. When my grandma asked me if I had any riding pictures, I showed her this image. “That’s you?” she asked, squinting at it. “Are you sure? It looks like…never mind.” My grandmother is known for her brutal honesty. (Once, during Christmas Eve mass, she reached over the pew to tell my dad that he should really try Rogaine. Everyone within three rows of her heard, and to this day she’s not sorry.) However, because I’m sometimes her favorite granddaughter, she refrained from commenting further on my appearance, instead asking for other pictures of my riding.

“I appear to have one or both eyes closed, as usual.” Photo by Maria Hurd.

Although embarrassing pictures used to make me dread looking up show pictures online, there are so many unflattering ones of me that, by this point, they’re a source of humor for my coaches, teammates, and me. At our recent equestrian banquet, I asked for a picture between my coaches. They agreed and, while we were arranging ourselves into a row, my coach Steve said, “Look, a thorn between two roses.” Really, I have no grounds on which to dispute his remark — they both cleaned up well for the banquet and, having seen the expressions my face is capable of on show days, who can argue? One thing the horse show industry has taught me (and that I’ve fully embraced) is that it’s much easier to make people laugh than it is to impress them.