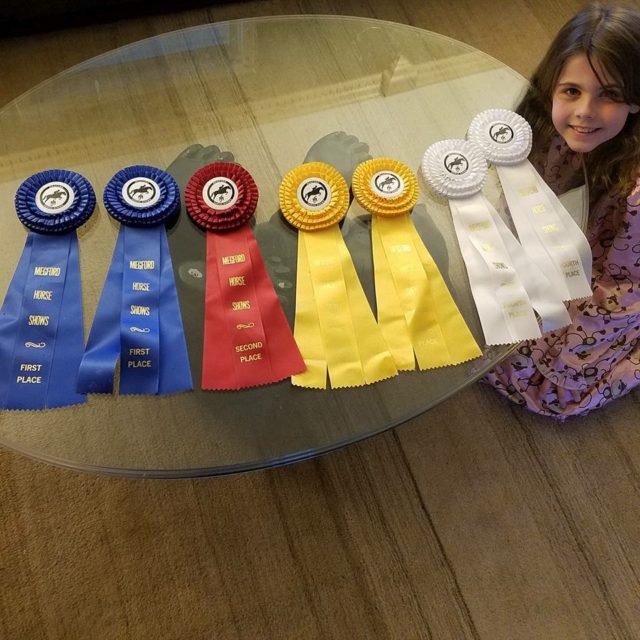 No matter your status (junior, adult amateur, or professional) riding horses is hard work. We often hear the perspectives of our peers, but have you ever stepped back to think about what we do from the eyes of a young child? Get your dose of adorable insight with this new monthly column featuring Ainsleigh, a young rider who dreams of jumps larger than a crossrail as she tackles her first show, a few falls, and much more. Today, Ainsleigh tackles her first horse show.

Hi! My name is Ainsleigh and I am 10 years old. I ride horses at Fox Run Stables and my favorite pony is Puff the Magic Dragon, but we just call him Puff. I recently just went to my first horse show! Scary? Fun? I don’t know! My best friends and I (we call ourselves the pony pals) were all there. There are 5 of us in total. Only Kaylee, Anna, and I showed that weekend, but every pony pal was there to watch. It was Anna’s first show too so she felt the way I felt.

10 year old Ainsleigh aims to share her horsey viewpoints with other young riders and the child in all of us! Photo by Meagan DeLisle

When it was time to show things started to get crazy and fast. We had all tacked our ponies up and then we realized that Anna didn’t have a number!!!! To make things worse Kaylee didn’t have a string to tie her number on and we couldn’t find anyone to help us. Our division was going, it wasn’t our turn, but we were freaking out. Eventually our coach Ms. Cassie and my mom came along to save the day. They gave Anna her number and Kaylee her string and everything was fine.

Three of the Pony Pals ready to show! Photo by Jamie McDowell

I was last to go in the ring out of all three of us. We decided what order we wanted to go in. We picked Kaylee to go first because she had been in a show before. Then Anna would go because she wanted to go next and I didn’t really care. When it was Anna’s turn I watched her ride but halfway through I started to think about having to show. I got so nervous, my feet felt so full of adrenaline, and I didn’t know if I would have enough strength to get in jump position!

Then it was my turn. I went in and did my courtesy circle and headed for the first jump. After I jumped the second jump I realized that the only thing different from riding here and riding at home is here it matters a bit more. That helped me relax a lot. I went to the next two jumps and they were fine, so I did my courtesy circle and left the arena. The rest of my classes went great. In my flat class I got second out of a huge group. Just my luck, the computer at the show messed up so I had to wait until the next day to get my other ribbons.

Puff and I did great at my first show! Photo by Meghan Glenn

On the second day, Puff and I did really good again. Most of the day was waiting a long time before our classes and then waiting a long time AGAIN between our jump classes and our flat class. After we finished our flat class and were done for the day we were really hot so all of the pony pals (Kaylee, Anna, Maddy, Abby, and I) had the most epic water fight ever. Then we helped load all of the ponies up in the trailer and everyone had to “go” when really, everyone was just going to walk around Memphis and then go home. That weekend was the best birthday present ever (well it wasn’t really my present but it happened three days before my birthday so yeah, we can call it that)! Those were the best two days of my life for real.